You know, it’s been a while since I did an Ultraman review. The thing about Ultraman reviews is that they kind of have to be Ultra-Act figures, and Ultra-Act figures are a) a little pricier than other figures and b) released at a rather slow rate. But, as luck would have it, a new Ultraman was just released last month! This time around, it’s Ultraman Mebius, the tenth main Ultraman, and star of (wait for it) Ultraman Mebius. Since he was the tenth Ultra, Mebius’s show had a lot of references to the previous Ultras, and had more than a few guest appearances by the previous stars. His show was a love letter to the previous series, and the character himself was perfectly in the vein of his predecessors. This helped Mebius really pick up a fan base, and his show is definitely my favorite after the original. He was one of the earlier releases in the Ultra-Act line, but time has passed and the line has progressed, making his first figure a little out of place. So, now he’s been given a new release. Yay! 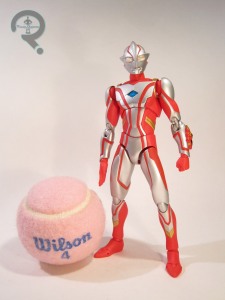 Mebius was released in late 2014/early 2015 as the newest addition to the Ultra-Act line. The figure is about 6 inches tall and he features 40 points of articulation. As I mentioned in the intro, this is the second Mebius in the line, and this one serves to update the last one to the line’s current standards, mostly sculpt-wise. The figure is based on Mebius’s standard look from the series and it features an all-new sculpt. The sculpt is quite well done. Everything is nice and sharply detailed, and the various pieces of his “costume” look accurate to the character’s appearance in the show. One thing of note would be the figure’s proportions, which don’t quite seem accurate to the show. It’s not unusual to see Bandai give the ultras slightly more heroic proportions for the figures, but Mebius seems to have been hit by this more so than others. He’s one of the tallest Ultra-Acts so far, which is somewhat counter to Mebius being depicted being smaller than the older Ultras with whom he was interacting. He’s also incredibly broad-shouldered, which is not really true to any of the live action Ultras. Ultimately, these changes look nice on the figure, but they do make him stand out just a bit in comparison to previous figures. Mebius’s paint apps are pretty much in line with the rest of the line’s figures, which is to say they’re quite good. The colors are nice and bold and very accurate to the show, and all of the work is clean and sharp, with no bleed over or slop. The figure also has the proper switches in sheen from the armored parts to the red, non-armored parts, which is a subtle touch, but a very important one. After the last few accessory-packed Ultra-Act figures, Mebius seems a little light on the extras, though he still has way more than any of his domestic counterparts. He includes his Mebium Shot (attached to a hand), a chest plate with a red color timer, a chest plate with shallower edges (for posing), an alternate Mebium Brace with the Mebium Slash engaged, and two extra pairs of hands: flat-handed and gesturing. All of the pieces swap out relatively easily, though I’d be careful while putting on the Mebium Shot; it’s rather sharp on the edges! 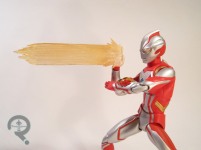 As has been the case with the last few Ultra-Act figures I’ve procured, Mebius was gotten via Amazon. I’d actually been waiting anxiously for the Mebius re-do since it was announced and I placed a pre-order through Amazon as soon as possible. I’m thrilled to finally have the figure in hand. I’m a little uncertain about the move towards “larger than life proportions” on the new Ultra-Acts, but that’s more to do with consistency. Mebius is a fantastic figure and, slight problems with consistency aside, he looks really great with the other ultras! 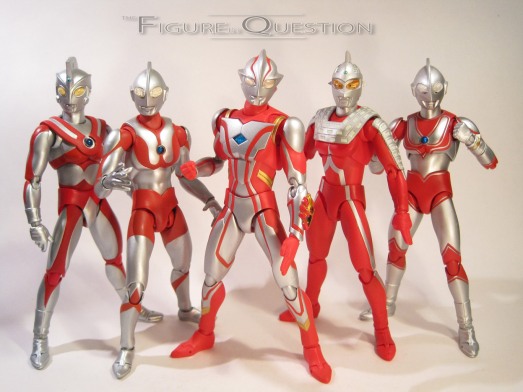