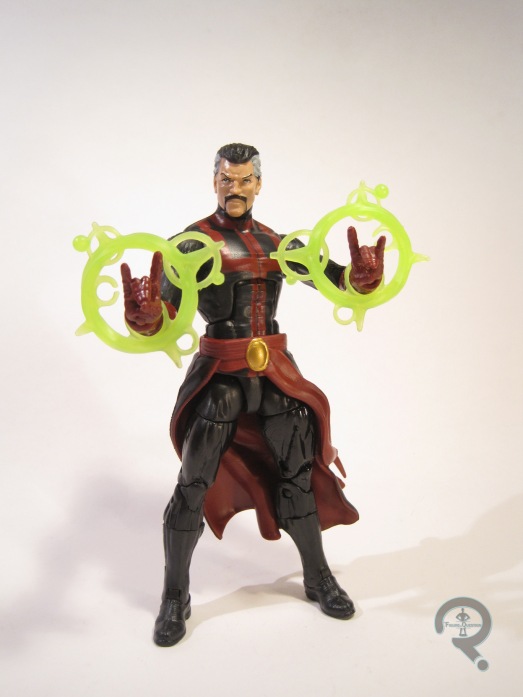 One does not simply review one or two Marvel Legends figures. Oh, no no. If you’re gonna review Legends, you gotta go all in, do a whole series. At least, that’s what I keep telling myself, anyway. Hey, so, Marvel Legends. Yaaaaay. Today, I’ll be looking at an up and coming player (for the MCU anyway) Doctor Stephen Strange (yes, that’s his real name), the Sorcerer Supreme!

Doctor Strange is another figure from the recent Hulkbuster series of Avenger Marvel Legends Infinite Series figures. He is officially named “Marvel Heroes,” which he share with series-mate Vision. Still feel it’s a bit generic, but whatever. He is presented here in the look he received not too long before Marvel Now!, which was his primary look until the month this figure was released. Well, they tried to be topical, I guess. Honestly, it had a decent enough run in the comics that it feels worthy of a figure, so I can’t complain. The figure stands about 6 ¼ inches tall and has 32 points of articulation. Sculpturally, he is head-to-toe identical to the Astral Projection Doctor Strange from this year’s SDCC set. That seems sensible, since he’s the same guy and all. I liked the sculpt a lot there, and I continue to like it here. Rather than being molded in clear plastic, the good doctor is now showcased in full color. He’s…well, he’s alright. The paint is actually pretty clean for a Hasbro figure, so that’s good. The red and black looks pretty sharp as a color scheme, even if I do miss the classic blue look a bit. The only real trouble with the paint is the head, which isn’t bad, just kind of…meh. The eyes are definitely the worst part of it; they look just a bit off. If they were better, I think the figure as a whole would be better. Doctor Strange is packed with a pair of the same spell-casting pieces we saw with both Scarlet Witch and his Astral form, but in a nice, muted green this time. They still remain very cool pieces, though they are a little difficult to get seated properly on his wrists. He also includes the left leg of the Hulkbuster, which continues the trend amongst Hulkbuster pieces of being freaking ginormous.

Doctor Strange is one of the four figures from this series I was able to grab at Walgreens. I’d actually been looking forward to him a little bit, since the Toy Biz version was always one of my favorite Legends figures. That being said, in-hand he was a little bit of a let-down. I think that’s largely due to having already seen the sculpt on the Astral version, which was aided by not having to rely on the Hasbro paint apps. Compared to that figure, this guy just feels like the inferior figure. Which is a shame, because I think he’s actually pretty well done, just not quite as well done as the last figure.