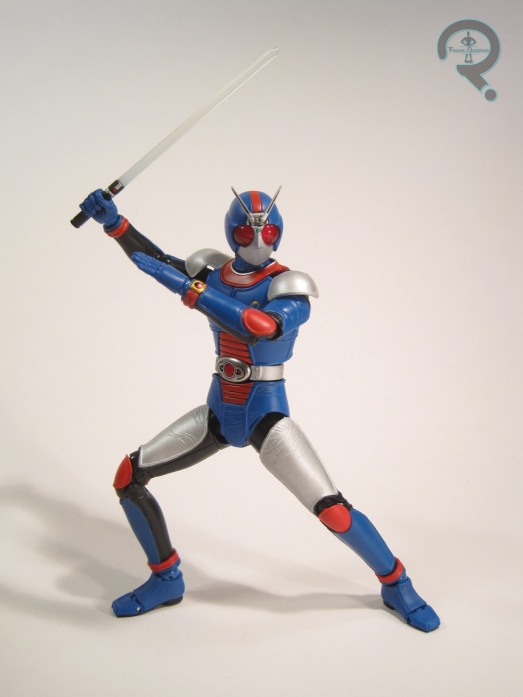 The term “Tokusatsu” refers to Japanese live-action films or TV dramas that make use of considerable amounts of special effects. The term includes things such as Godzilla and Ultraman, as well as Super Sentai (more commonly known in the U.S. as Power Rangers). It also includes Kamen Rider, which is the source of the subject of today’s review. This marks the second time I’ve looked at a Kamen Rider figure on this site, so hey, it’s still kind of new and exciting! I’ll admit up front: my knowledge of Kamen Rider stuff is passing at best, so I’m counting on what I’ve read online to fill in the blanks. So, without further ado, here’s Bio Rider! 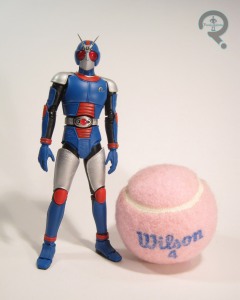 Bio Rider is part of the rather extensive Kamen Rider sub-set of Bandai’s S.H. Figuarts line. He was released in the latter part of 2014. Bio Rider hails from the Kamen Rider Black RX show (which was the show that was adapted into Saban’s Masked Rider in the mid-90s), where he was a power-up ability for the title character, referred to as “Bio Rider” in Japan, but “Masked Rider Super Blue” in the U.S. I feel like Japan kind of won on the naming front. The figure stands about 5 ½ inches tall and has 45 points of articulation. While Bio Rider and RX share some common design themes, the two designs were actually pretty divergent from each other. Bio Rider is by and large a much sleeker design, and he sort of has an almost art deco air about him. It’s a much stronger design than the basic RX look, but I suppose an argument could be made that it loses some of more signature Kamen Rider elements. The figure’s sculpt does a pretty good job of capturing Bio Rider’s design from the show. He’s not a pitch-perfect recreation: the helmet’s a little squatter, especially in the face, and the eyes are more round. But, it’s still pretty darn close. The details on his suit are pretty amazingly done. He actually looks like he’s wearing a rubber suit, just like on the show. There are even small creases on the thighs to show that they crumple when he moves his legs. That’s quite an attention to detail! Bio Rider has quite a unique color scheme for a Kamen Rider. They tend to be predominantly green and black, but Bio Rider is a nice blue and silver combo, which looks pretty sweet. The actual paint application is some of the sharpest work I’ve seen on just about any figure. There’s no bleed over or slop that I can tell, and the color choices really pop. Also, not paint, but the lenses and buckle of the belt are both molded in translucent red, which works in conjunction with the sculpted texture on the underside, giving him a cool bit of depth. In terms of accessories, Bio Rider includes his Bio Blade weapon, as well as hands in fist, tight grip, loose grip, relaxed, open gesture, and karate chop positions. That’s a bit lighter than some of the Figuarts figures I’ve reviewed, but Bio Rider was actually a slightly less expensive figure, and it’s still not a bad assortment.

This is Tim’s fault. See, I’ve looked at some of the Figuarts Kamen Riders before, but managed to steer clear of them. But, then Tim went and bought himself a Kamen Rider, and suddenly I found lacking. So, using an Amazon gift card (given to me by Tim’s parents! That’s strike two for Tim!), I ordered this guy. I’m not 100% sure what called me to this guy. Maybe it was the color scheme, or perhaps the sleek design. I must admit, I was amused to find out that he was actually from the one incarnation of Kamen Rider I’ve actually seen, given that wasn’t a purposeful decision. This is a really fun figure, and I’m definitely glad I got him. I foresee more Kamen Riders in my future.