Hey, it’s been a month since I reviewed any Minimates.  That’s statistically too long a period given the make-up of my collection.  Guess I better review some more.  Today, I once again turn the Marvel license, looking at some comic-themed ‘mates (a bit of a rarity these days), based on more classic designs no-less!  So, let’s dive head-in and take a look at Havok and Storm!

Havok and Storm were released in the 14th series of TRU-exclusive Marvel Minimates.  This pair in particular was designed to complete the Outback X-Men line-up released in Series 47 of the main line, which hit right around the same time.  Why they chose to pack these two together is anyone’s guess, since it’s not like Havok and Storm have a lot of history, but I’m not really going to complain.

This marked Havok’s third entry as a Minimate, and his second comic-based ‘mate.  He’s more or less wearing the same costume as his first comic ‘mate, though if you want to get *really* technical, that ‘mate was in his ‘60s costume and this one is in his ‘80s one.  Not a lot of differences, but they’re there.  Also, it had been almost a decade at this point since his first ‘mate’s release, which would have made completing the team a bit difficult for newer collectors.  The figure is built on the usual ‘mate body, so he’s about 2 1/4 inches tall and he has 14 points of articulation.  He’s got one add-on piece for his mask, which is a separate piece this time, as opposed to being just painted on.  I like the sculpted design a bit better, and I also appreciate that they’ve gone for the slightly more splayed design of the antenna he was sporting in the ‘80s, thereby making him more specific to this team line-up.  In terms of paint, he’s a step-up from his predecessor in some ways, but a step down in some others.  The mask is rather on the sloppy side, which is frustrating.  Also, he’s saddled with a screaming expression again, although at least this time you can swap out the head under the mask for a calmer one for another ‘mate if you want (I find that the Series 38 Iron Fist works pretty well).  The added muscle detailing on the torso and legs is definitely nice, as is the clean detailing his energy tracker on his torso.  I do somewhat miss the printed energy detailing of the last figure, but the accessories make up for that.  He included a brand-new effect piece to simulate his powers, which is the same piece that would be modded to be Banshee’s scream effect.  He also includes a spare hair piece for an unmasked look.  He does NOT include the pictured display stand; I just forgot that wasn’t always a standard piece when I was taking this picture. 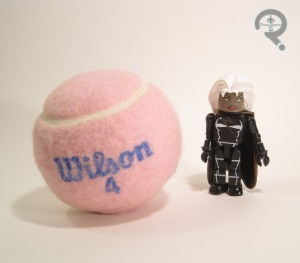 As much as I love Havok, there’s no denying that this set’s heavy hitter is Storm.  This marked Storm’s seventh time as a ‘mate.  Unlike Havok, this isn’t a repeat of an earlier design, although it shares a few design elements with a few prior ‘mates.  This is her post mohawk look, but her pre-90s-shoulder pads look.  It doesn’t quite have the staying power of a lot her designs, but it’s decent enough, and shown up in a few toy lines over the years.  The figure uses add-ons for her hair, glove cuffs, and cape.  The cuffs are re-used from Battle-Damaged Spirit, but the rest of the pieces were new.  Both pieces are decent enough.  The hair doesn’t have the ears sculpted like most ‘mate hair pieces, which is a little odd, but it’s otherwise pretty solid.  The cape is okay, but seems a little on the stiff side.  In terms of paint, she’s not bad.  The glossy sheen on the black is a nice touch, and I like the bright grey detail lines.  The gold could probably stand out a bit more, and the skin tone could do with a more organic hue, but the application’s all pretty great.  Storm includes a pair of electricity effect pieces (the same ones included with six of her other ‘mates), as well as a flight stand.

Okay, so Havok’s one of my favorite X-Men, so as soon as these figures hit, I made it a point to get this set.  I ordered them from TRU’s online store, which, as with most of the times I’ve done so, was quite an ordeal.  Of note, neither they, nor the other set I ordered (Heather Hudson & Box, for those who are curious) was actually listed under their name, instead being given the generic title of “Marvel Minimates 14: Figure.”  Fortunately, a kind soul over at the Minimate Multiverse provided the group with the SKUs, so I was able to determine which set I was ordering that way.  Havok is awesome.  A definite improvement over the prior release.  Storm is alright; hardly my go-to version of the character, but a solid ‘mate nonetheless.