Does anybody else remember Robots?  That CGI comedy from 2005 about a world entirely populated by goofy robots, which starred like a dozen big-name actors?  I myself only remember it every so often, when I see my DVD copy of it sitting on my shelf.  Back when it was released, I actually thought it was really amusing, and I still enjoy it when I sit down and watch it.  But, it just doesn’t seem to have had any sort of lasting impact or anything.  It did manage to get some action figures when it came out, so that’s a plus.  Today, I’ll be looking at one of the many variations of lead character  (and Ewan McGregor-voiced) Rodney Copperbottom. 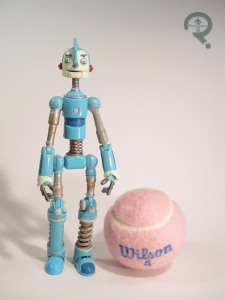 Mattel had the license for Robots, and there were several different scales offered, with less and less characters offered as the scale got larger.  Today’s figure hails from the 7-inch line, which gave us both Rodney and his friend Fender (voiced by Robin Williams in the film).  This scale offered probably the best figures Mattel offered from the license, but at the cost of offering only two characters.  The figure stands about 7 inches tall and he has 16 points of articulation.  The scale is a little odd, since it doesn’t really go with anything, but the styling doesn’t really match up with anything either, so I guess it’s not a big deal.  The articulation is somewhat low by modern standards, but was pretty solid for a non-Marvel Legends line of the time.  In terms of design, Rodney offered a lot of the typical retro-robot design elements, albeit fed through a George Lucas/Ridley Scott used-future sort of filter, and then polished off by a Disney artist.  Are you following all of that?  Yeah, me neither.  The figure actually does a pretty remarkable job of capturing the in-film design for Rodney, which is more than could be said for most of Mattel’s output from the film.  Some of the details are a little on the soft side, but the general look of this figure is actually pretty solid.  The springs on the shins and waist are separate pieces, which is fun, and the waist one is even an actual metal spring (with a weird spinning feature attached to it).  The paintwork for Rodney is decent enough.  One of the issues that plagued all of the Rodney figures was Mattel’s uncertainty as to exactly what shade of blue Rodney was supposed to be.  They were pretty much all a different hue.  This one’s probably the closest, but still seems a bit too warm.  On the plus side, the rest of the paint is pretty good, with clean base work (apart from some slight bleed over around the eyes), and some rather impressive rust detailing on the silver bits of his arms and legs.  Rodney was packed just on his own, with no cool extras or anything, which kinda sucks, since there was some pretty cool stuff they could have given him.

I didn’t get Rodney when he was new, for whatever reason.  It’s strange, because I liked the movie a lot, so you’d think I’d track down one of the line’s best figures, but I didn’t.  I ended up finding him at 2nd Avenue while I was there with my brother.  Like everything else I’ve ever gotten there, he was in a bag of several other un-related figures, for $2 or something.  That was enough for me to take the plunge on him.  I’m really glad I did, because he’s a surprisingly fun action figure.  Now I kinda want the Fender figure to go with him.