“A second-generation crimefighter, LAURIE JUSPECZYK followed in her mother’s footsteps as SILK SPECTRE.  Although she was never close to with the super-intelligent hero OZYMANDIAS, their paths would cross again when someone begins a campaign to kill or discredit former vigilantes.”

You know it’s a bad pairing when even the bio on the back of the box describes the characters as “never close.”  The last two days of Watchmen Minimates perhaps haven’t been the strongest partnerships, but at least they all had one or two key scenes together.  Today?  We got the left overs.  Without further ado, Silk Spectre and Ozmandias!

The prior two sets were made up of characters shared between the specialty four-pack and Toys R Us-exclusive assortment of Watchmen Minimates.  Silk Spectre and Ozymandias, on the other hand, are both exclusively available in two-pack form through TRU.  Why these two ended up as the exclusives is kind of hard to figure out; I personally would have swapped out Comedian and Laurie, but at the end of the day, it’s not a huge deal, I guess. 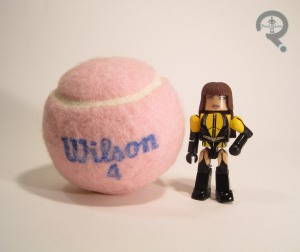 Laurie Jupiter (It was Juspeczyk in the comics, but the movie never explains Sally’s changed  surname or has Laurie correct Rorschach’s use of “Jupiter” when he meets her, so it sticks) is patterned loosely on Charlton Comics character Nightshade.  Really, though, the only similarities the two share are a partnership with Captain Atom/Dr. Manhattan.  Beyond that, they’re rather different.  For the purposes of the movie, Silk Spectre’s look was rather changed.  The basic spirit of the original look is still there, I guess, but it’s more generic catsuit now than it was originally.  Meh.  The figure is about 2 1/4 inches tall and she has the standard 14 points of articulation.  Her only add-on is her hair, which is borrowed from Marvel Minimates’ New Mutant Magik.  Given it’s a near perfect match for her hair in the movie, the re-use is certainly warranted.  The rest of the work is done by the paint.  It’s all pretty solid.  She’s probably got the best paint in the series, to be honest.  The colors are sharp and bold, and there’s very little slop.  She includes a clear display stand and…that’s it.  Seems a little light, but I don’t really know what you could give her.  Maybe a more interesting character?  Oh wait, they did! 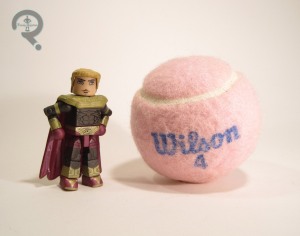 Jokes at Laurie’s expense aside, I can’t say Ozymandias is really a favorite of mine either.  He does at least get to be the villain (spoilers?).  He was originally meant to be Peter Cannon…Thunderbolt (yes, the ellipsis is part of his name) who never amounted to much on his own.  Ozy’s design in the film looks rather different at first glance, but the only truly major change was making the main bodysuit dark grey instead of gold.  It’s still the most easily distinguished of the designs, though.  Like Laurie, he’s built on the standard ‘mate body.  He gets add-ons for his hair, cape, and belt.  The hair and cape are new pieces.  They’re a little soft on the details, but look decent enough overall.  In terms of paint, Ozy’s okay.  Nothing truly amazing.  The pale, non-metallic gold isn’t the best look, but the application’s fairly solid.  The standard head sports his mask (seen only in flashbacks), but there’s also an extra head without the mask.  That’s more than the DC Direct figure gave us!  He also includes the usual clear display stand.  Fun times.

Well, those reviews kind of went out with a whimper, didn’t they?  Sorry guys, I’m not trying to be a downer on this set at all.  Neither ‘mate is bad or anything, but neither one is as strong as the other four.  I really feel like splitting up this pair would do a lot to help both of them.  With that said, once you’ve got the whole set together, it makes for a pretty sweet display.  I’ve been waiting a long time for Watchmen Minimates, and while maybe I would have preferred comics-based ones, these are definitely a great set of ‘mates to have.  Now, to hold out hope for a second series with some Minute Men!