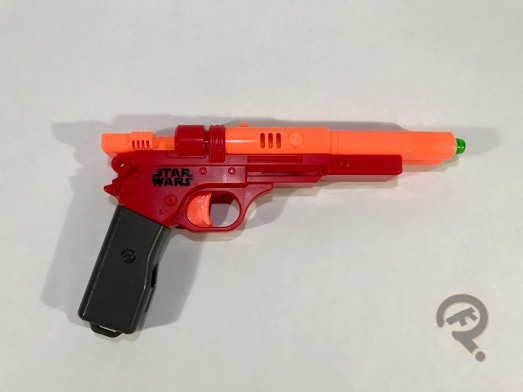 For the last couple rounds of Star Wars Nerf products, it seems like Hasbro has really settled on the formula of releasing a big show off blaster, a medium one with some features, and then a dinky little pistol that is really just there to have a cheaper offering.  More often than not, the pistol gets shafted in terms of quality, typically winding up being a woefully underpowered (even for the Star Wars blasters) single-shot and that’s it.  Now imagine my pleasant surprise when I saw that the pistol offering from the latest wave not only has legitimate range claims on the box, but also can be fired TWICE before reloading.  Sure, it’s hardly groundbreaking as far as Nerf goes, but it’s nice to see Hasbro going just that little bit beyond the bare minimum.  With all that said, let’s take a look at the Qi’ra blaster pistol. 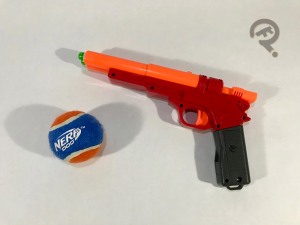 Hi guys.  Thanks for tuning in to another video on Forgotten Weapons, I’m Ian and today I’ll be looking at this, the Steyr Mannlicher model of 1905 militar— wait, wrong blog.  Let’s try that again.  The Qi’ra blaster pistol was released in 2018 as part of Hasbro’s wave of Nerf merch tying in to the upcoming Solo: A Star Wars Story film.  It uses a 2-barrel smart AR system like that on the DoubleDown or DoubleStrike or basically any Nerf blaster that starts with “double” (except the DoubleDealer but we don’t talk about that).  Even though I got the wrong intro, it is true that the blaster in the film appears to be based on the aforementioned Steyr Mannlicher 1905 military pistol with a long toe.  You gotta remember that long toe.  I, personally, am quite a fan of the choice here.  It’s nice seeing the prop department for the film taking cues from the original trilogy by using WW1 and WW2 era small arms as the base for most of the blasters you see on screen.  Like all Nerf Star Wars blasters now, the Qi’ra blaster features lights and sounds every time you pull the trigger.  The lights are rudimentary, only lighting up one side of the blaster, but do show a bit more finesse than previous models by fading out rather than just turning on and turning off abruptly.  The pew pew sound effect in this blaster is the same as on the Poe Dameron blaster from the Last Jedi line of products.  It’s a little 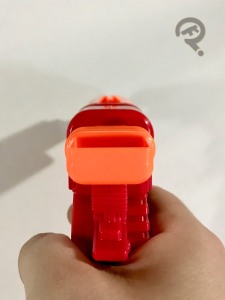 disappointing that this blaster couldn’t get its own unique sound, but if it plays into Hasbro’s game of halfway decent but still economical Star Wars products, I can get over it.  The blaster also uses the Glowstrike system with UV LEDs in the barrel and glow-in-the-dark darts.  This and the lights and sounds requires just a single AA battery, but this does not effect the actual dart-launching functionality of the blaster.  Being built on a real-world firearm, the ergonomics are decent on this blaster.  The grip is maybe a little blocky but there’s nothing I would really call out as being unpleasant.  The length of the prime is quite short, but the spring feels reasonably powerful and as such, the blaster actually performs pretty well, only just underperforming blasters from the Elite series.  Similar to the Chewbacca blaster, I’d say this blaster is probably best suited for clandestine attacks or ambushes on your younger siblings, preferably at night so they get the full effect with the glowing darts and whatnot.  The Qi’ra blaster comes packaged with 4 Glowstrike Elite darts and 1 AA battery already installed.

I picked this blaster up on a run to Target with Ethan.  I had just bought the Chewbacca blaster only minutes prior and decided liked it enough to keep the ball rolling, so to speak.  As soon as I opened it, there was something familiar about it that I couldn’t quite put my finger on, so naturally I consulted the video library of Forgotten Weapons and voila, I had my answer.  While admittedly there would be an incredibly niche chuckle to be had if they had chosen to use the Steyr Hahn pistol in a movie about Han, I think this one works out better aesthetically.  It’s that long toe, man, gotta have that long toe.