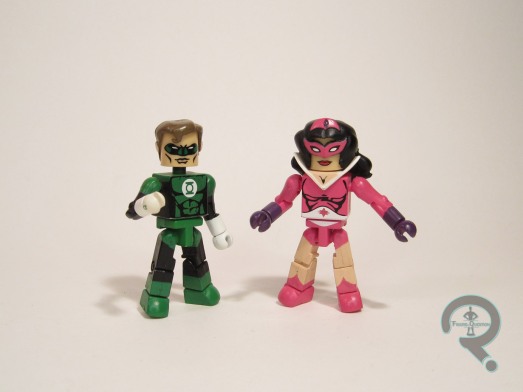 It’s been almost two years since I last looked at any proper DC Minimates.  Plenty of other Minimates in the mean time, but not DC.  It’s sort of sad, really.  At the time, they were a beacon of hope, combating fears that the brand might be dying out.  They came in, stepped things up, and then ended up dying out themselves just before Minimates as a brand really took off.  We got eight series, a decent enough run, with most major players covered.  The Green Lanterns did alright, starting from day one, in fact, with a Hal Jordan and Star Sapphire pairing.

Green Lantern and Star Sapphire were part of the first series of DC Minimates.  Initially, they were meant to hit at the same time as the second and third series, to jumpstart the line in a similar fashion to the Marvel line, but delays set in, and the first series ended up hitting on its lonesome.

Green Lantern was just at the beginning of his upswing in popularity when this line launched, so his place in the first assortment was definitely a sensible one.  They went with Hal to start, which was certainly the smart choice.  He’s got his Bronze Age design, which has always been my personal favorite.  The figure is based on the standard ‘mate body, so he’s 2 1/4 inches tall and he has 14 points of articulation.  His only add-on piece is for his hair.  It was shared with this series’ Superman.  It’s an okay piece, but lacks the higher detailing of more recent offerings.  I myself have never been really big on the s-curl piece for Hal, since it just feels a bit too distinctly Superman, and doesn’t match Hal’s usual style.  I ended up replacing it with another piece, though he’s seen un-altered here.  The rest of the work is paint, which is actually pretty top-notch, apart from one or two small issues.  The detailing on the face is very clean, and very true to the character, and the torso detailing is spot-on.  There’s even a little bit of detailing on his right hand for his ring.  My only minor complaint is the epaulets on his shoulders, which here cover a much larger section of the arm, making them look more like t-shirt sleeves.  Far from terrible, but a minor annoyance.  GL includes his power batter, which is a fantastic piece, and expertly sculpted.

While Batman and Superman both got their primary villains in Series 1, GL’s main bad Sinestro had to wait for Series 8.  Instead, we got Star Sapphire, who’s still a pretty solid choice.  Like GL, she’s the classic incarnation of the character.  By far the best.  Presumably, this is Carol Danvers, but in a pinch there are probably others it could be.  She’s got two sculpted add-ons; one for her hair/mask, and one for her collar.  Neither’s as good as they could be.  The hair/mask combo was perhaps not the best way to handle it; sure, her mask sticks out in the comics, but I feel it would look better as a painted element.  It’s just a bit bulky as is.  The collar’s a good concept, but execution is once again just too bulky.  It ends up removing most of her neck.  I think just the collar, without the flesh bit attached, would have worked better, but this was at the time when a Marvel figure of an equivalent design would be using a whole bulked-up torso, so this was better.  At the very least, the collar is easily removed if you don’t like it.  Her paint’s not quite as good as GL’s; the actual detail lines are fine, but the base colors seem a little sloppy.  Overall, though, not bad.  Star Sapphire had no accessories.  I feel like an energy effect, or an extra hair piece would have been cool.

I got this set, like every other DC Minimates set, from Cosmic Comix, as soon as they were released.  Prior to their release, I was hugely excited to get them.  As a big GL fan, this is actually the set that got me back into Minimates after a bit of a break, and kept me in the game for a solid decade.  The ‘mates themselves aren’t anything amazing, but they were rather momentous for me, and I still really like them.