“Vroom vroom, baby.  It is I, Deadpool, and my merry heard of fluffy-tailed friends. All aboard, dirty-pawed brethren!  It’s ride-off-into-the-sunset time.”

It’s been exactly 200 reviews since I did my last Deadpool-centric review.  Time for another one?  Might as well be.  So, why a Deadpool review?  Well, let’s put some context on this one: just a little over a year ago, Hasbro launched the Legendary Riders sub-set of their popular Marvel Legends line.  It’s focus is, as you might expect, on providing some of their Legends with their rides.  Deadpool is just one of the lucky ones to get focussed on for this last go-round.  But, it’s not just Deadpool all by his lonesome, he’s bringing some of his Deadpool Corps teammates with him! 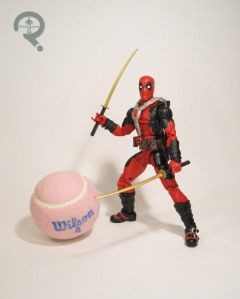 Since his re-appearance in the Juggernaut Series, there have been no shortage of Deadpool figures in Hasbro’s Legends line-up.  Just last year, he got four separate 6-inch releases.  Now he’s gotten one more.  This one’s another go at a default Deadpool, though he’s wearing a different derivation of his costume than the Juggernaut or Sasquatch Series releases.  This one goes back to Deadpool’s appearance from around the mid-00s, right about when his popularity really started to spike.  This is most clearly denoted by the y-shaped harness that he sported at the time, which is also seen on this figure.  I’m not as big a fan of this particular look, but it’s been a few years since it got a Legends release, and at least it’s something different.  The figure stands 6 1/4 inches tall and has 32 points of articulation.  As you might expect, he’s largely made up of re-used parts.  The bulk of the figure uses the same construction as the Juggernaut Series release, though he swaps out the harness piece for the one from the 2008 figure.  That figure was built on the Bullseye body, so the harness isn’t a perfect fit, but it’s close enough that it doesn’t look out of place on this figure.  The one new contribution here is the head, which is stylistically consistent with the prior DP head, but now depicts his eyes wide-open, and his mouth clearly agape under the mask.  It suits the incredibly goofy nature of this entire set very well, and I think it may well be my favorite of Hasbro’s Deadpool heads.  Deadpool’s paint work is a bit of a conundrum.  On it’s own, it’s a nice paint job.  It’s clean and bright, and suits the character well.  So, what’s the problem?  It doesn’t match either the dark red of the Juggernaut Deadpool or the exceedingly bright red of the Sauron Series Deadpools, meaning that there’s no way to swap the various expressions between the figures.  It’s a definite missed opportunity if you ask me.  Deadpool is armed with a pair of katana, which he can stow in the sheaths on his back.  They’re gold instead of the usual silver, which is a nice change of pace.

Deadpool may not be defined by his ride, but the image of him looking super goofy while riding around on an appropriately color-matched vespa has become fairly common place in the cultural lexicon, and is a sensible choice here.  It measures 4 inches tall by about 5 inches long.  It’s got working wheels and can properly steer, and all that jazz.  It’s also got a working kickstand to keep it upright most of the time.  The sculpt is actually really nicely handled.  The shaping is clean and sharp, and everything flows together quite well.  It’s also a very unique looking item, with less re-use potential than Widow’s cycle had.  It also doesn’t have the obvious screws that the cycle had, which I count as a very

definite plus in this vehicle’s favor.  The scooter has it’s own specific accessory, a little horn to mount on the handle bars.  It also includes a sheet of stickers for customization, but I don’t see myself using that much.  The most important extras, though, aren’t for the scooter, but instead accent the included Deadpool.  We get figurines of both Dogpool and Squirrelpool.  Dogpool is articulated at the arms and neck, and can be mounted on the scooter.  Squirrelpool is unarticulated, but can be placed on Dogpool’s back.  Also included is an extra head, for a figure that’s not even in this set.  Whose head is it?  Why it’s only Deadpool’s bestest sidekick ever, Bob: Agent of Hydra!  It’s perfectly matched the standard Hydra Trooper from the Agents of Hydra two-pack, which is still quite readily available, making this a rather ingenious extra.

Okay, so, admittedly, this set wasn’t at the top of my list or anything when it was shown off, because it was shown off at the same time as the outwardly more impressive Professor X.  Also, I’d be lying if I said I wasn’t a little worn out on Deadpool.  That being said, I did used to be a fan back in the day, and the confirmation of the extra head for Bob really swayed me quite a bit.  Plus, I was also getting an Xavier, and I felt compelled to grab them both at once.  I’m actually really happy I did.  This is probably the best package deal of all the vehicle sets.  You get a solid, unique variant of a main character, a quite well-crafted vehicle, and a bunch of fun little extra characters.  I dig it.  I dig it quite a bit.

This set was purchased from my friends at All Time Toys, and it’s currently available from their store, here. And, if you’re looking for other toys both old and new, please check out their website and their eBay storefront.