“Ultra Magnus is all soldier. He is most comfortable when he is carrying out Optimus Prime’s orders – giving it all of his magnificent fighting skills, courage and gift for battlefield improvisation. And he is uncomfortable when the mantle of leadership is placed over his broad shoulders. He sees himself as a follower, not a commander, and is reluctant to assume authority until it is clear that he has no choice but to lead. And when he does finally lead, he is resolute, fair and courageous beyond reproach. He is ever-ready to sacrifice himself for the good of his companions and mission, and unstinting in his preparedness so that his “people” will be as protected as possible.”

Last March, after firmly jumping aboard the Transformers train, I decided to take a look at the very first figure of my favorite Decepticon, Soundwave.  Well, as I’ve touched on at least once before in the last year, my favorite character on the Autobots side is Ultra Magnus, so it’s only appropriate that I take a look at his beginnings…more or less.  See, in 2002, Hasbro partnered with Toys R Us (in the US, at least) to put out reissues of some of the vintage Transformers.  Among these reissues was not-Optimus himself, Ultra Magnus, who I’m looking at today! 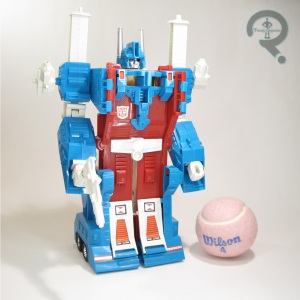 Ultra Magnus was released in Series 1 of The Transformers Commemorative series, alongside Optimus and Rodimus.  He uses the original G1 molds, meaning like his original 1986 figure, Magnus is a re-deco of Diaclone‘s Powered Convoy figure.  Unlike the relatively unchanged Soundwave/Cassette Man, Magnus was granted a wholly original color scheme from Powered Convoy (though early animation for Transformers: The Movie showed him in the Powered Convoy colors, and they would later see use as the separate Delta Magnus).  In his “Super Robot” mode, Magnus stands 8 1/2 inches tall and he has 8 points of practical articulation.  As with Soundwave, the vintage Magnus sculpt is definitely more rudimentary and basic than later versions would be, perhaps even a little less advanced than Soundwave.  Comparatively, Magnus is rather stiff and limited in his poseablity, with his only actual articulation in the super robot mode being limited to the arms.  It’s a fair bit of movement, in his defense, but you’re kind of limited by what you can do with him.  The sculpt proper is certainly a product of its time, but if you’re a fan of old robots (which I am), he’s certainly got a sort of charm about him. 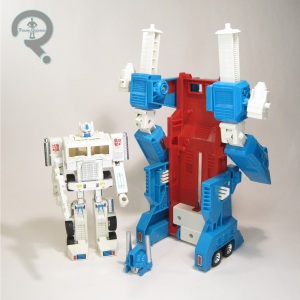 Since Powered Convoy was an ugrade for the figure that would become Optimus Prime, that means that his super robot mode was really a sort of armor for a smaller figure, as we saw replicated on the Siege figure.  That said, the transition from super robot to standard robot is a whole lot simpler on this guy than the Siege release; you just take off the helmet, pop him out of the back of the armor, and put his hands in place.  And boom, white Optimus–I mean Magnus, who stands 6 inches tall and has 10 practical points of articulation.  He’s a minor retool of the same figure that would become Optimus, and like the larger figure, is kind of rudimentary in design.  He’s a little more poseable, with some joints on his legs, but they don’t amount to a whole lot.  He’s not quite as nifty as the fully 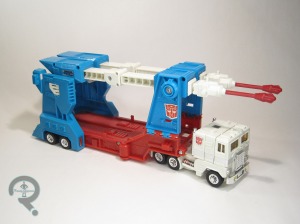 suited up version, but it’s hard to compete with the chonk that is fully armored Magnus.  Magnus’s core alt-mode is a Freightliner, much like Optimus, but in white, with his armor transforming into a car carrier (which is sized to carry 4 normal Autobot cars).  The transformation is sort of a mid-way point between the Combiner Wars and Siege Magnus’, with more of an actual transformation like the CW, but still a touch of Siege’s parts-forming.  Magnus is packed with a blaster rifle (designed to work with both of the robot modes), plus two missile launchers and four missiles (which have been lengthened for this release so as to meet safety standards).

A few weeks back, All Time Toys got the first piece of a rather sizable Transformers collection, which was heavy on the G1.  I didn’t think there’d be much for me in there, but I did think in the back of my mind that if there were a G1 Magnus in there, I’d probably have to buy him.  Well, you’ve probably pieced together what happened, haven’t you?  Yeah, I bought me a Magnus.  He’s pretty darn nifty, too, and he pairs well with my vintage Soundwave.  Plus, another Magnus for my Magnus collection.  Yay!

As I noted above,  I got this guy from my friends at All Time Toys, and a good chunk of the collection he came from is still available here.  If you’re looking for other cool toys both old and new, please check out their website and their eBay Store. 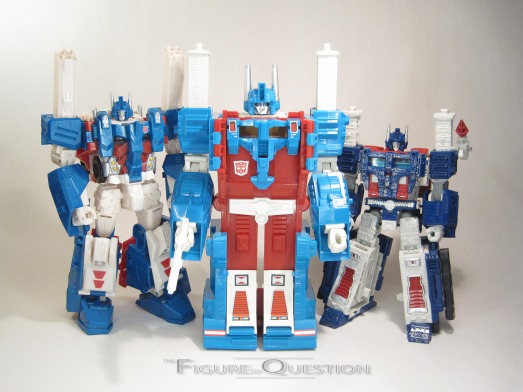