“Captain Phasma and a squad of elite First Order troopers capture Resistance heroes Finn and Rose, who have infiltrated Snoke’s flagship, the Supremacy. Before Phasma can eliminate them, a series of unforeseen events leads to a dramatic battle between Phasma and Finn.”

Poor Captain Phasma.  She had everybody on her side in the hype for the new movies and then it all just sort of fell by the wayside.  She’s not that bad a character, but I guess it’s hard to live up to those lofty fan expectations.  Lessened fan interest in the character, coupled with keeping more or less the same design from one film to the next meant that Phasma’s toy presence for The Last Jedi was seriously reduced.  She got one Black Series offering, offering a more scene specific look, which I’ll be taking a look at today. 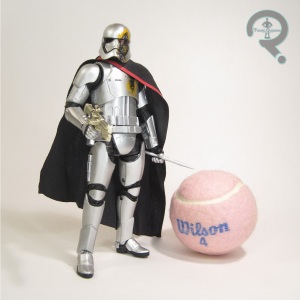 Quicksilver Baton Captain Phasma was originally intended as a Toys R Us-exclusive Black Series offering, set for release in mid-2018.  Guess what happened in mid-2018.  Yeah, there was a distinct lack of TRU to give the exclusive to (in the US at least; Canadian TRUs still carried this figure as their exclusive), so like the Zuckuss figure, Phasma was salvaged by Disney Stores for her US release.  The figure stands 7 1/4 inches tall and she has 24 points of articulation.  Given how her design didn’t actually change between the films, it not a huge surprise that this figure is largely a re-use of the previous figure.  She gets a new head, and swaps out the plastic cape for a cloth one.  I also got a slightly better range of motion out of the hips and shoulders on this figure, but that might be a figure to figure sort of thing.  The new head is designed to replicate the damage Phasma takes to her helmet at the end of her battle with Finn, so we get to see just a little bit of Gwedolyn Christie’s eye peering through.  It’s a pretty cool effect, as is the sculpted damage.  I also really like that they sculpted her head and helmet as separate pieces, further adding to the effect.  The cloth cape doesn’t quite have the same impressive appearance of the sculpted one, but it does make the figure a bit less of a statue.  Phasma’s paint remains similar to the last release, but she of course gets the added detailing on the eye (which is printed), as well as the scorch damage on her helmet and torso.  In addition to the gold blaster rifle included with the last figure, this one also includes the Quicksilver baton in both long and short forms.

I looked at this figure when it was new, but given the choice between Phasma and Zuckuss, there was really no contest, given the scene-specific nature of this particular figure.  I was evidently far from the only fan to make such a choice, and Phasma ended up getting clearanced, at which point she was cheap enough to get me interested.  She’s a nice figure, and honestly a better figure than the standard.  It’s a shame they didn’t do more with the character, but at least we got her from her best sequence.