“One of the nameless, faceless legions of COBRA Command. Each COBRA is highly skilled in the use of explosives, all NATO and Warsaw Pact small arms, sabotage, and the martial arts.”

Okay, let’s go back to the well of the randomly generated list of reviews, shall we?  What are we gonna do today, Brain?  Same thing we do every day, Pinky: try to take over the world.  If you’re gonna take over the world, you need some good, solid faceless minions.  Also, if you’re going to launch a toyline with a limited tooling budget which really only covers the main heroes, leaving the space for only a single villain figure, the faceless minions also help there.  When G.I. Joe: A Real American Hero was launched in 1982, they had one villain: Cobra, subtitle “The Enemy.”  Later, that same figure would be more commonly referred to as the Cobra Trooper, as the line grew and Cobra became a much larger organization.  But, that name, Cobra –  The Enemy, stuck with people, so when the 25th Anniversary line was launched in 2007, it was used for a couple of figures before “Cobra Trooper” took hold again as the go-to name.

Cobra (The Enemy) was released in the second wave of single carded 25th Anniversary figures in 2007.  He was the third Cobra Trooper variant in the line, following the slightly different Cobra (The Enemy) released in Battle Pack #1 and the Cobra Officer released in the first wave of singles.  The figure stands just shy of 4 inches tall and he has 22 points of articulation.  As one of the earlier figures from the line, he suffers from some rather restricted movement on the elbows, which can’t quite make a full 90 degree bend.  It affects his ability to properly hold his weapon, but otherwise he manages alright.  He just needs some creative posing.  All three of the ’07 Cobras share the same core body.  It’s a respectable update of the original ’82 design, now with more removable gear and depth to its design.  Both his helmet and webgear are separate, removable pieces.  The webgear’s a little bit on the floaty side, but looks decent enough, but the helmet stays nice and snug.  Perhaps a little too snug, even….I’ll touch on that in the paint section.  Hey, let’s jump over to the paint section.  For the most part, he’s pretty good.  Application’s clean, and everything looks pretty sharp.  Technically, the Cobra insignia being silver’s not really a regular Cobra thing.  Were it not for the black gloves in place of blue, this guy would actually be spot-on for the deco from 1983’s Viper Pilot figure, which didn’t actually get an update, so there you have it.  The only true issue with the figure’s paint concerns that tight helmet, and the fact that it’s placed on the figure in the package.  It got a little stuck on mine and ended up taking some of the skin tone from the sides of the head with it.  It’s a little distracting when the helmet’s off.  Cobra (The Enemy) is packed with a rifle, a short blade, and a display stand.

Cobra (The Enemy) came relatively early into my 25th collecting, which was, of course, after the line had pretty much wrapped.  I had gotten the Resolute sets and wanted more figures.  Cosmic Comix had a handful of figures, including Hawk, Sgt. Flash, and this guy.  He mostly came along for the ride with the other two, because I didn’t want to just leave him behind.  He’s hardly my favorite Cobra Trooper in my collection, but at the same time, he’s not a bad figure.  He at the very least does a decent job of filling in the ranks. 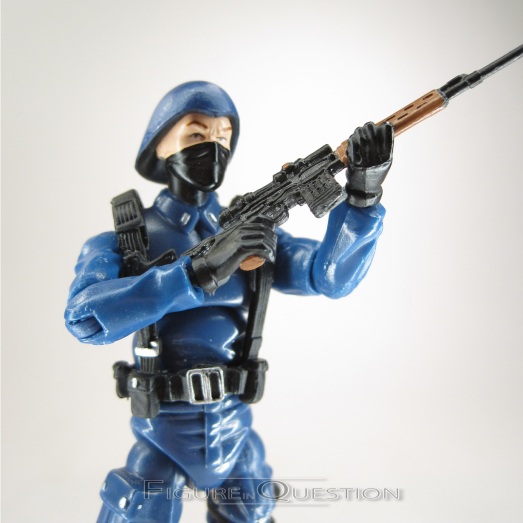