“Alexei Shostakov is a super soldier and spy who has lived a lifetime of triumph during the Cold War.”

Imitators of Captain America are no rare thing, in pretty much any incarnation of the Marvel universe.  In the span of the next year, we’ll have two of them introduced into the MCU.  The first is today’s subject, Alexei Shostakov, better known as the Red Guardian, the Soviet Union’s answer to Cap, and, at least in the comics, anyway, the ex-husband of Natasha Romanov.  I don’t think that’s quite going to be their relation in the movie, but only time will tell.  Whatever the case, Stranger Things alum David Harbour has been cast in the part for the film, presumably so that when you say “that comic book movie where David Harbour’s red,” nobody thinks of Hellboy anymore.

Red Guardian is figure 3 in the Crimson Dynamo Series of Marvel Legends, and the second-to-last of the movie-based figures.  This is our second Red Guardian Legend, following the comics-based one from the Civil War tie-ins.  He’s theoretically based on the main design for the character from Black Widow, but…well, there’s a bit to that.  The figure stands 6 1/4 inches tall and he has 31 points of articulation.  In contrast to yesterday’s Yelena figure, which was too tall, this guy’s really not tall enough, given that David Harbour’s height of 6’3″ should actually make this figure roughly an inch taller than the two Widows, placing him more into Thor territory (since their actors are actually the same height, and all).  As it stands, he’s just about an average height, which does seem a little bit on the small side.  At the very least, his sculpt does seem to have the appropriate bulk to it, so there’s at least that.  What it doesn’t have, however, are two somewhat important things: Alexi’s somewhat disheveled appearance, and his uniform’s helmet.  In circumstances I can only assume are rather similar to what happened with the Infinity War Captain America, where Hasbro was working 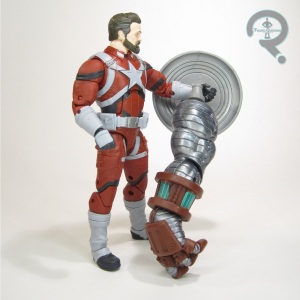 from early concept art for the character, rather than the final film’s appearance.  The end result is a figure that looks suitably like David Harbour in a Red Guardian costume, but doesn’t seem to be quite so accurate to the proper character as seen on screen.  Maybe there’s a flashback sequence where Alexei is a little more pulled together, but my money’s on that not being the case.  It’s honestly too bad, because it’s a good sculpt, and makes for a very playable figure.  The Harbour likeness is a strong one, too, and I like the general look of the design.  I will say that his paint work is probably the weakest out of this particular assortment, at least on my figure.  There are a few spots where it looks like the coverage wasn’t as consistent as it should be, and my figure is missing some noticeable paint for his beard at the bottom of his chin.  Red Guardian includes his shield and the left arm of Crimson Dynamo.  The lack of an extra head really stands out here, because he’s otherwise quite light compared to the rest of the assortment.

I was pretty much prepped to be a little letdown by this figure.  It happened with IW Cap, and this feels pretty much the same.  The thing is, he’s honestly a good figure, and it’s a shame that a lot of people are probably going to miss that because he’s inaccurate.  I don’t know if Hasbro will be going back for a more proper version later down the line, but I can at least appreciate this guy for what he is until such a time that there may be a better one.

This guy was purchased from my friends at All Time Toys.  If you’re looking for Marvel Legends, or other toys both old and new, please check out their website and their eBay storefront.