“As the voice of reason of the Ghostbusters team, Winston can calm things down when the world gets a little crazy.”

Hey, it’s Winston!  The Ghostbuster that doesn’t get the credit he–wait, I’ve been this way before, and I’m sure to be this way again.  What?  Was that a Neil Diamond reference?  That’s…well, that’s really odd and doesn’t seem to fit the general aesthetic, does it?  Also, really diverts the attention away from poor Wintson, who, as I’ve mentioned before, really doesn’t get the credit he deserves.  Man, I’m falling into the same trap everyone else does, aren’t I?  Well, the only way I can see fit to properly make it up is to review this figure of Ernie Hudson, Ghostbuster!

Winston is figure 4 in the first assortment of Plasma Series figures, and wrapping up the ‘busters team.  Like Egon, he’s just a single-pack, but I can’t say that’s terribly surprising, given the aforementioned lack of credit for pretty much anything having to do with Winston.  The figure stands just over 6 inches tall and he has 29 points of articulation.  From the neck down, Winston’s the same figure as Egon, which is a fairly sensible choice, given the similar builds and usual state of their uniforms.  Anything else really would have just been change for the sake of change.  He does get a new head sculpt, and it’s another really strong one.  I’m not sure if it’s quite as good as Egon, but it’s definitely got a very clear Ernie Hudson likeness, and doesn’t overly genericize or go too far into caricature like the DST, Mezco, or Mattel versions.  I was initially a little iffy on the slightly open mouth for the sculpt, because such expressions can always have a lot of room for error, but I think it ultimately looks really good, and I was impressed by how well the likeness held up from various different angles.  In terms of paint, Winston is pretty similar to the other three ‘busters, which is to say he looks pretty good.  The face printing is again really good at highlighting the likeness on the sculpt, and really giving him a life-like feel.  Winston of course gets the same removable proton pack as the other three, but gets probably the coolest additional part of the main ‘busters:  a proton blast effect.  It’s really well done, and it’s kind of a shame we didn’t get the piece for all four team members.  Winston also includes the final leg to the Terror Dog Build-A-Figure, which I’ll be taking a closer look at next week.

The kind of iffy nature of the likenesses on both the Mattel and DST Winstons was a decent part of why I didn’t jump into either of those lines, so I was pretty happy to see how well this particular version had turned out, and was definitely very happy with him once I saw him in person.  Of the four, I’d rank him just after Egon in terms of my favorite figure in the set.  He turned out very well, and hopefully he too will be getting a repack down the line so that he’s not too hard to find.  In general, these four are really just the best bang for your buck when it comes to movie-styled ‘busters, and I’m looking forward to what sorts of variants and such Hasbro has in mind.

Thanks to my sponsors at All Time Toys for setting me up with this figure.  They’re currently sold out of their initial shipment of the line, but should be getting more soon.  If you’re looking for other toys both old and new, please check out their website and their eBay storefront. 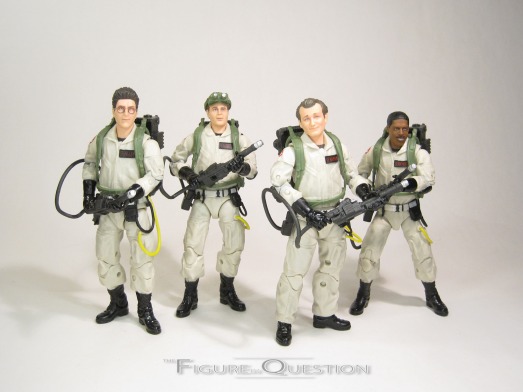