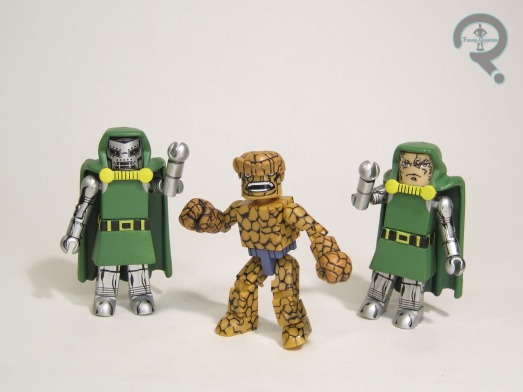 While the first year of Marvel Minimates certainly gave us an impressive spread of Marvel characters, there were some very notable areas of the universe left completely untouched.  This included Marvel’s own first family, the Fantastic Four, who, like Captain America signaling the first of the the Avengers, were first inducted into the line via Series 5, with the group’s most marketable single member The Thing facing off against their greatest foe Dr. Doom!

The Thing and Dr. Doom marked wrapped up the line-up for Marvel Minimates Series 5, also taking the variant slot for this particular assortment.  The standard pack had Thing vs a fully-armored Doom, while the variant swapped out Doom for an unmasked version.

For his debut ‘mate, Ben gets a fairly classic Thing design.  He’s orange, he’s rocky, and he’s wearing blue shorts.  Sure, the shorts aren’t quite standard FF-issue, but they’re close enough for a single release.  He’s built on the standard long-footed body, of course, so he’s 2 1/4 inches tall and has 14 points of articulation.  Like Venom, Hulk, and Juggernaut, Ben’s a large character who’s not very large.  That said, with the head piece and the sculpted “Thing Fists”, he actually makes out the best of the bunch in terms of relative scaling.  He’s got cartoonish proportions, of course, but he doesn’t feel quite as scrawny as the others.  It helps that the sculpting is really good on the new parts.  It also helps that the paint does an incredibly impressive job of conveying Ben’s rocky skin, and the painted features end up matching pretty darn well to the sculpted rocks on the head and hands.  The only slight nit I have with the paint is that the face is just a touch too high on the head, which means that it doesn’t *quite* interact correctly with the head piece. 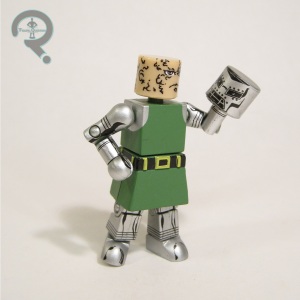 Marvel’s greatest villain was a pretty natural choice for inclusion here, but his variant ultimately falls into the same level of “this wouldn’t be a separate figure”-ness that Unmasked Daredevil had.  Whichever version you look at, he’s got the same two sculpted add-ons, one for his cloak, and the other for his belt/skirt.  The cloak is actually kind of nice, and concise.  It’s maybe not the greatest for posing, but I find it less obtrusive than the versions that followed.  The skirt piece doesn’t work quite as well, being really flat and without flow.  Even with the much more streamlined philosophy of the earlier ‘mates, it seems a bit lacking.  The paint on everything but the head is identical between the two releases.  It does okay for the most part.  The armored detailing on the arms and legs is definitely the best work.  Comparatively, the tunic feels kind of devoid of detail, but again, that’s owing a lot to the early style.  The standard Doom gets his mask, which is nicely detailed, and matches up with the rest of the armor’s details.  It’s limited to just having details where the hood reveals it, which isn’t surprising, but does mean displaying him without the cape doesn’t really work.  For the variant, we get to see Victor Von Doom’s scarred face.  It’s a more minor scarring than some depictions, but it’s still there.  Unlike the masked head, this one has detail that goes all around, even under the hood, which is actually pretty darn cool.  It just would have made much more sense to include the extra head with the standard release, is all.

This is another one of those sets that I had as a kid, but I lost most of the parts to over the years.  I was pretty rough on these early guys.  Of course, I only had the standard Doom, so I was able to go back and get both versions when I tracked them back down again.  Thing’s not a bad little version of the character, especially within the confines of the early line.  Doom isn’t quite as cleanly interpreted here, but I think he works well-enough, and while he has some trade-offs, so would all of his eventual follow-ups.  They wrap up Marvel Minimates‘ first oddball assortment pretty nicely.