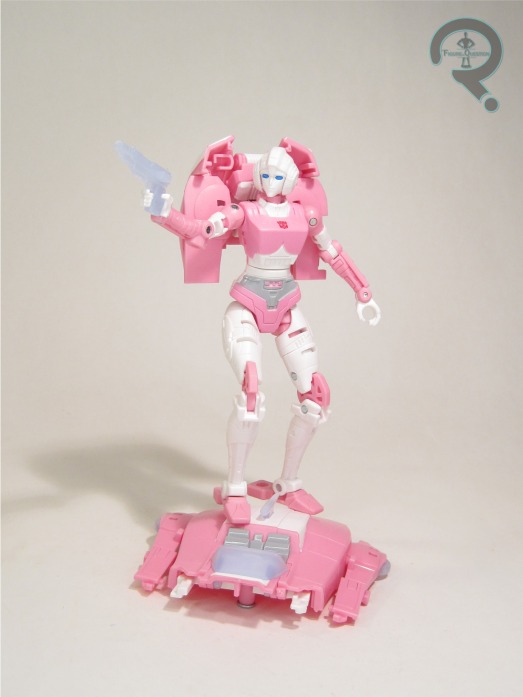 The cast of 1986’s Transformers: The Movie is a rather memorable bunch.  I guess being the central characters in what amounted to a rather expensive commercial for a very merchandise driven franchise will do that for you.  Absent from the merchandising side of things at the time was the film’s lone female Autobot, Arcee, who’s had a bit of trouble actually getting toys out of this toy-based franchise.  She was supposed to have a proper transforming release with the rest of the movie crew in ’86, but was scrapped, then was intended to get a Headmaster release, which was also scrapped, then an Action Master, which was again scrapped.  There was also supposed to be a Titanium Series release, but that went about as well as the others.  Transformers Animated finally gave her an actual release (even if it wound up being a TRU-exclusive; store shelves are store shelves), but was, of course not true G1.  That said, in the last few years, there have actually been a number of options for G1-inspired Arcees, with the latest one coming as courtesy of Earthrise.  Perhaps things are finally doing a little better by Arcee…or are they?  Yeah, let’s talk about that.

Arcee is part of the second Deluxe Class assortment for Earthrise.  It was supposed to hit much closer to the release of the first Deluxe Class assortment, but, well, 2020 just wasn’t having any of that, so they sort of trickled their way out until we got into the fall, at which point they seemed to hit in more full force.  As noted in the intro, this Arcee is very much inspired by her G1 animation model.  In her robot mode, Arcee stands about 5 1/2 inches tall and she has 24 usable points of articulation.  Arcee’s mold is new to her, but will be serving as the launching point for both the upcoming Lifeline and Elite-One figures.  It’s quite divergent from the last fembot I looked at from the War for Cybertron line, Chromia, whose mold focussed more on facilitating her alt-mode, thereby crafting a somewhat compromised robot mode that was much stockier and had a lot more kibble than the character was usually depicted with.  For Arcee, they somewhat took a page out of Cliffjumper’s book, and decided that the easiest way to control the kibble on the back for a character with a much more svelte robot mode was to just give people the option of removing said kibble entirely.  So, you have the option of cutting down Arcee’s backpack by about half, which honestly works pretty well.  You can then turn said extra kibble into a sort of a hoverboard thing, which is fine, I guess.  It’s not quite as well formed as Cliff’s extra bit turning into a shield, but it’s not terrible either.  On the plus side, the robot mode’s quite nice on this figure.  I think they did a really solid job of capturing her animation model, and is just a rather fun action figure to boot.  The articulation definitely works well, and she’s just overall got a nice sleek feel about her. 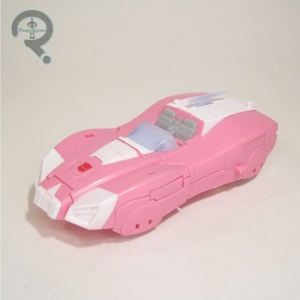 So, there, I was very complimentary of the robot mode.  I really like it.  Remember that.  Hold onto that.  It’ll get you through the next section.  What’s that?  Oh yeah, it’s the vehicle mode.  Let’s talk about that, I guess.  Arcee turns into a sci-fi-looking sports car, as she did in the movie…which is rather amusing when you remember that she’s part of Earthrise, a line that was supposed to be devoted to Earth modes…but I’m getting distracted.  The transformation process is, well it’s not the most fun, that’s for sure.  I will give them one bit of credit: in contrast to how things were done with Cliffjumper, you can actually leave the extra kibble attached to the figure during the whole transformation process, so there’s not technically any parts forming this time.  That being said, that might actually be more pleasant than the actual transformation process, which isn’t great.  She’s definitely got some shell forming going on here, which, to be honest, is kind of expected with her design.  So, that much I get.  That said everything ends up being really fiddly, and rather tricky to get to line up right, and getting her to actually fold up properly into the shell isn’t as easy as you might hope.  She winds up in a car mode that is always threatening to pop apart at any second, with her folded up body barely even clearing the wheels of the car mode so that it can actually do car stuff.  It’s also not a mode that makes you feel very confident in your ability to transform things, so I kept having to double check the instructions to make sure I was in fact doing it the right way.  Even then, I remained less than full convinced, and the car mode seems a little lopsided to me.  It’s not great, you guys.  Arcee is packed with one accessory, a small gun, molded in clear plastic.  It’s a cool piece for the robot mode, but doesn’t really have anything to do for the alt-mode, which is kind of a shame.

I’ve been waiting on an Arcee update since I got dragged into this by Max during the Siege days.  Earthrise was kind of leaving me a bit cold at first, but they showed Arcee off, and I was all on board for her to be sure.  She was definitely on the top of my list for Earthrise, and I’ve been patiently awaiting her arrival on shelves.  I love the robot mode so much, which makes how little I like the car mode a bit frustrating.  She’s…just so uneven.  Like, I don’t really see myself really using the vehicle mode at all, which is a bit sad.  Still, she’s a stellar robot figure, and that *is* the thing I wanted the most out of her.  Despite how much I may have ripped into the car mode, I can’t help but love the robot part of this figure, and that makes her an overall win in my book.

Thanks to my sponsors at All Time Toys for setting me up with this figure for review.  If you’re looking for Transformers, or other toys both old and new, please check out their website and their eBay storefront.