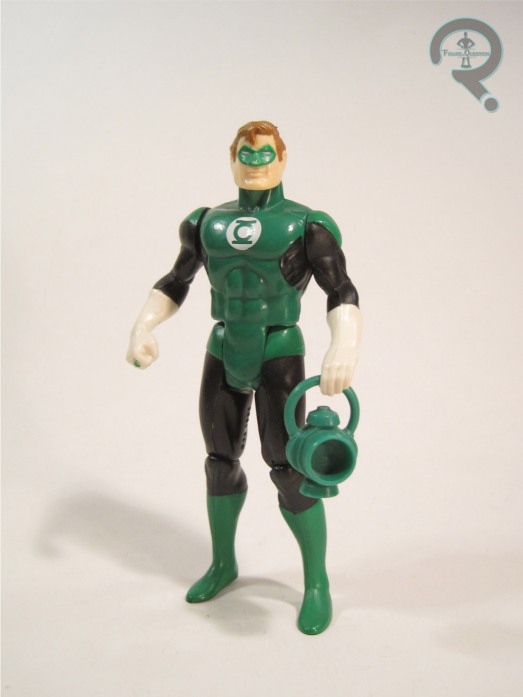 “Green Lantern’s power ring that can create, temporarily, any object he desires with his willpower. The ring also is used as an offensive weapon. The ring protects him form mortal harm as well: he cannot be killed. The ring enables him to fly and survive in space, or even at the bottom of the ocean. The ring is powerless against the color yellow. The ring must be recharged every 24 hours at his power battery.”

Oh man, are you prepped to get psyched?  I sure hope so, because I certainly am.  Why is that?  Remember how Super Powers is my favorite DC toy line?  And how Green Lantern’s my favorite DC character?  Well, put those two things together, and, boom, you get the subject of today’s review.  Pretty slick, right?  No?  Admittedly, it may just be me.  But, hey, it’s my site, so we’re gonna just roll with it.  After being so cruelly overlooked by Mego when they were giving most of the DC heavy hitters their first action figures, Hal Jordan, aka the second Green Lantern, was finally given his toy due in 1984, when Kenner launched their own run on the DC brand, with the figure I’m taking a look at today!

Green Lantern was part of the first series of Kenner’s Super Powers line.  The line was certainly drawing from Challenge of the Super Friends, whose prominent use of GL I’m sure did him a lot of favors when it came to being included in this line-up.  The figure stands 4 1/2 inches tall and he has 7 points of articulation.  Hal’s design, like the rest of these early figures, was based on Jose Garcia-Lopez’s illustration of the character in the 1982 DC Style Guide.  This had Hal in his slightly updated GL uniform, which featured the additional green detailing on the shoulders.  It became something of a defining trait for the character’s design, helping to make this figure look rather timeless.  Hal’s sculpt is a very nice one, perhaps one of the nicest to come out of the line.  It’s very clean, and appropriately sleek for GL.  The build on the figure had him slightly more svelte than the likes of Superman or Batman, which definitely seems right for Hal, and I quite like how the various parts of the uniform are actually raised elements, rather than just being painted in place as most later figures would handle things.  I will say, in regards to the head sculpt, Hal’s chin does seem a bit more pronounced here than it usually is, but overall, the head does seem right for the character.  That mask is really spot on.  Hal’s paint work is pretty simple, but appropriately clean and striking.  Mine has a touch of wear on his nose, but is otherwise pretty good.  GL was packed with his lantern power battery, which my figure actually has.  Pretty sweet! He also gets an action feature, the “Power Action Ring Thrust.”  Gotta love that name.  Essentially, you squeeze his legs, and the right arm raises. Pretty appropriate for the character.

In the dark days of the ’90s, Hal Jordan had been replaced by Kyle Rayner, and was therefore not really getting much toy coverage.  This was at cross purposes with my desire to own a Hal Jordan figure, thanks to becoming familiar with the character through Super Friends re-runs on Cartoon Network.  After my dad introduced me to the wonderful Super Power Archives, Hal became the first Super Powers figure I actively wanted to own.  He wasn’t the first one I *got*, but was fairly early on.  I specifically requested him for Christmas one year, and came down Christmas morning to find both him and Martian Manhunter propped up on the Christmas Village waiting for me.  He didn’t have the Power Battery originally, but I was able to get him one of those too, eventually.  He’s definitely my favorite figure in this line, and probably my favorite Green Lantern figure period. 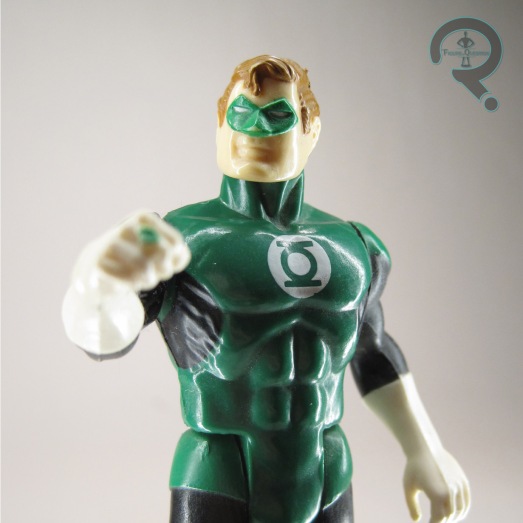