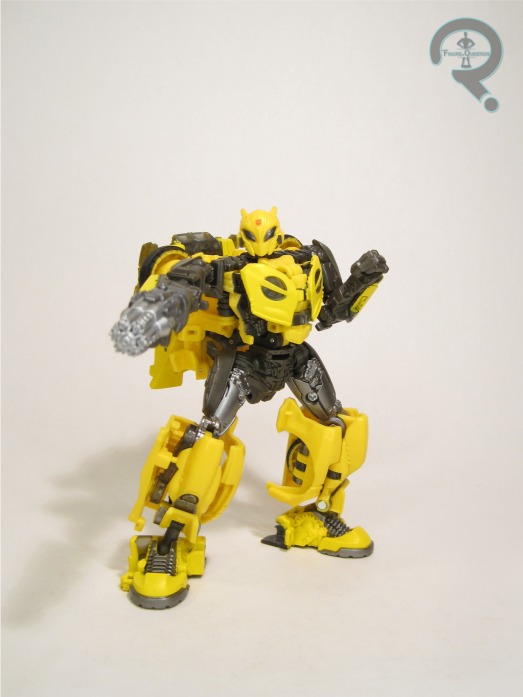 While the majority of this year’s Studio Series offerings are based on Transformers: The Movie, there are still a few of the live-action film designs worked in.  For the most part, that’s not so much for me, but my one exception to that rule comes in the form of Bumblebee, the only one of the live-action Transformers movies I actually liked and would want own any real product from.  The film’s smaller cast means there aren’t a *ton* of potential figures, but the main robots from the film all have a few different looks to choose from.  Specifically, our titular ‘bot gets four notable looks.  So far, we’ve gotten his VW Bug look and his Jeep look, and the Camaro look’s been covered by other films, so the one notable one missing was his Cybertronian appearance.  So, without further ado, let’s look at B-127!

B-127 is figure 70 in the Studio Series line-up, and is one of two figures in the latest Deluxe Class assortment of the line (the other one being Dino from Dark of the Moon).  He’s the line’s eighth figure based on Bumblebee, and will be shortly joined by the Cybertronian Starscream.  In his robot mode, B-127 stands 4 1/2 inches tall and has 16 workable points of articulation.  Structurally, B-127 is almost entirely re-use, as was sort of expected.  He’s a new head on Ciffjumper’s body.  Since Cliffjumper’s body was based on Bee’s Cybertronian appearance, it was something we all knew was coming, and also something that’s totally warranted.  It helps that it’s also just a rather nice

mold.  The head gives us Bee’s armored up attack mode look, which pairs off nicely with the standard robot-faced Bee head we got on Offroad Bumblebee.  While for more of a screen accurate set-up, they should probably be reversed for the two modes, I’m personally pretty happy with how they’re set-up.  Also, they can be swapped, if you’re interested in such a thing. Bee’s alt-mode is the exact same Cybertronian car mode that Cliffjumper had, which again makes sense, since it was technically Bee’s first.  It’s not a bad design, and the transformation’s pretty easy to work with.  Like the other two derivations of this mold, B-127 includes a blaster attachment for his arm.  Nothing fancy, but it’s certainly useful.

I honestly wasn’t sure I was going to get this guy when he was first shown off.  I already had Cliffjumper and Jeep Bumblebee, so he’s a little bit on the redundant side, I suppose.  However, once I saw him in hand, I was pleasantly surprised by how nicely he’d turned out, and I especially like that new head.  Sure, he doesn’t turn into a Jeep, but I suppose I can’t hold that against every non-Jeep Bumblebee, can I?