“After being stripped of the Captain America title, John F. Walker’s spirit is shaken and he takes on a new mantle: US Agent.”

John Walker is always sort of a necessary evil when it comes to the Captain America mythos.  He’s kind of got to be there to remind you of the things that Steve Rogers isn’t, and never should be.  The Ultimate Universe had no John Walker, and it kind of showed, because the end result was a Steve Rogers that wound up with a lot of John’s traits.  In the case of the MCU, they really hammered home that comparison to Steve, by actively making John a character that almost feels like Steve at first glance, but who quickly becomes very not Steve very suddenly.  It was an intriguing story, though perhaps not an overly pleasant one.  But, much like the comics, John’s not meant to stay in the Captain America role, and the show ends with him transitioned into the role he’s been in for about four decades in the comics: US Agent, the guy who can be what Captain America isn’t. 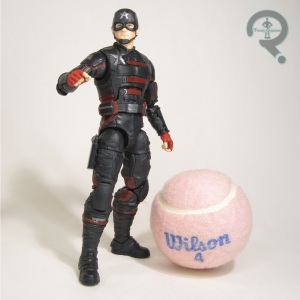 US Agent is figure 5 in the Disney+-themed assortment of Marvel Legends.  Given’s John very prominent role within the story, he’s a natural choice for the line-up, though it is obviously a slight change-up that he’s in his US Agent garb, which he only wears for a single non-action scene in the final episode, rather than the Captain America costume he wears for most of the show (which itself got a Walmart-exclusive release).  This gets into what I was saying with the Loki review, where I mentioned the set’s tendency to go with the looks with more staying power, which is what I’d say is true of this look over John’s Cap look.  The figure stands a little over 6 1/4 inches tall and he has 31 points of articulation.  His articulation scheme is on par with the more recent Steve Caps, which feels appropriately consistent.  There are probably some areas where he could stand to have a little more range, but for the most part, he does what he needs to do.  His sculpt is, rather predictably, shared with the John Walker Cap figure.  The two designs are very similar, and it only makes sense, really.  It’s a pretty good sculpt for the most part, capturing Walker’s slightly larger build, as well as all of the smaller details in the suit’s design.  I’m not big on the molded gun in the 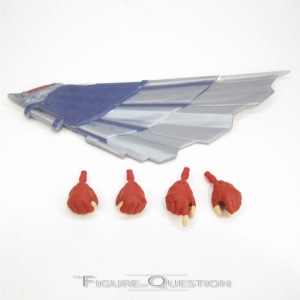 holster, especially at this point in the line, but there may be some licensing things going on there.  Unfortunately, the decision to do a complete parts share means that his helmet’s not screen accurate, since John’s US Agent helmet doesn’t have the A-Star on the forehead. It’s too bad they couldn’t do that one new piece, but I have to wonder if it may have been an early design element.  On top of the sculpt issue on the helmet, John’s paint also takes a slight hit.  They’ve clearly just used the same paint masks as the Cap figure, but with some of the colors changed out.  For the most part, this is fine, but in the case of his torso, it means that he’s got smaller red straps over a black chest, when going by the show, the chest part should be red, and the straps should be white, making for that true US Agent look a la the comics.  This ultimately bugs me more than the helmet, because this isn’t even a cost of tooling issue; it would literally just be changing out the paint apps.  This further adds to me wondering if maybe the US Agent costume wasn’t as different in the original designs, and that’s what we’re seeing here.  John is packed with two sets of hands, one set in fists, the other gripping, as well as another piece to the Captain America wings.  Even if his gun is molded into the holster on the figure, it’s still again a shame that the gun wasn’t also included.  I’m pretty sure we’ve already got the mold for it and everything.

I’ve always liked John Walker as a concept (though I don’t actually like John Walker as a guy, because he’s generally not the best), so I liked that they brought him into the show, and I liked that they allowed him to have his proper arc.  Wyatt Russell was fantastic in the role, and I look forward to seeing more of the character, even if I don’t actually look forward to seeing him.  While his Cap design was cool, I didn’t really find myself drawn into the exclusive, because, for me, he’s not Cap, he’s US Agent.  This figure has its few issues of accuracy, but even so, I do still really like him as a figure.