“Under the evil gaze of Emperor Palpatine, the lightsabers of two Jedi Knights – a father and son – clash furiously in a final duel between the light side and dark side of the Force. Slowly, the young Skywalker is lured closer to the rage of the dark side, and Palpatine sits confident of the Rebellion’s defeat and the acquisition of a new emissary to fulfill his evil legacy! But the young Jedi’s resistance appears to be growing…”

Though its later years saw Cinema Scenes switch more to getting out never before released characters and obscurities out in a quick shot, Kenner launched it with a focus on actually recreating distinctive scenes directly from the film.  It doesn’t get much more distinctive than Luke and Vader’s duel on the second Death Star during the climax of Return of the Jedi, so it’s not a terrible surprise that this scene was one of the ones more specifically recreated.  In fact, they technically recreated it twice, if you count the Power F/X figures.  But this was the only time they did it in Cinema Scenes.

The Final Jedi Duel was added to the Cinema Scenes sub-line of Kenner’s Power of the Force in 1997.  It was the only Jedi-based set from the first year, though many would certainly follow.  The set included a stand, like all of the Cinema Scenes, but this time it was a far more integral piece, since the Emperor’s chair is permanently affixed to the stand.

Jedi Luke was no stranger to this line, although at this point, he’d only had one version, and it was iffy on screen accuracy, since it amalgamated a few looks.  This one was unique in Power of the Force in that it was actually a Death Star II version of Luke, specifically sans the vest.  In fact, it was the first ever non-Endor Luke to not sport the vest, so that’s pretty cool.  The figure stands about 3 1/2 inches tall and he has 6 points of articulation.  While the core line was moving from pre-posing at this point, they had really translated it into the Cinema Scenes figures, which remained quite pre-posed in their first year.  Luke is one of the most impacted by this, with a deep lunging saber dueling pose.  It looks impressive when the whole set-up’s there, but on his own, it can be a bit limiting.  Notably, it makes him really hard to keep standing, which I’m not big on.  That said, the actual sculpt isn’t a terrible one.  Notably, it introduced a new head, more specifically tailored to Jedi than the one on the prior Jedi Luke.  It’s honestly not a bad likeness, especially for the time.  The paint work on this figure is pretty basic, but in keeping with the line.  He does get shiny boots, so that’s fun.  He’s packed with his lightsaber, which he has a little trouble holding. 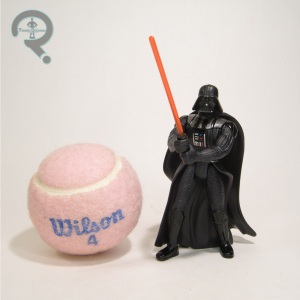 Vader was also no stranger to the line.  This marked the third version of him for the line, each one being slightly more pre-posed than the last.  It was another amalgamated design, keeping with the other two.  The figure stands just over 3 3/4 inches tall and he has 6 points of articulation.  This Vader sculpt actually got re-used a few tomes, mainly for the wonky colored repaints that Hasbro liked trotting out for anniversaries and special occasions.  Like Luke, he’s rather pre-posed, though this one’s a little more stable, and he can actually stand on his own.  Generally, he looks a lot like the prior two, but the one notable improvement here was the inclusion of his skirt beneath his cape.  That marked a first for a Vader figure, so it’s kind of a big deal.  His cape has been re-worked here so that it’s not actually removable.  It’s connection is kind of weird, but otherwise I guess it’s not bad.  The paint on Vader pretty much matches the other versions from the line.  It’s not like he really had any major change ups in the films, so if it ain’t broke, don’t fix it.  Vader is packed with his lightsaber, which he holds a lot better than Luke.

Ah, Palpatine.  Always the most thrilling action figure subject.  He’s so exciting, right?  What’s this one’s gimmick?  He sits.  That’s it.  That’s the whole thing.  Literally, he takes the overall vibe of all of the other Power of the Force Palpatines, folds him in the middle, and makes him sit in his sit-and-spin chair.  Technically he’s got articulation, and technically you can take him out of the chair, but really, what’s the point?  It’s not like you’re going to do anything else with him.  He’s made for sitting.  I suppose that’s more to the point for the character than other figures, so kudos to Kenner for that.  He’s also got the chair, which does look pretty cool.  Too bad you can’t take it off the base, but it’s still nice.

The Final Jedi Duel is a rather recent addition to my collection.  It got traded into All Time a couple of months ago, sealed.  They’d come through loose a few times, but without the base, at which point Palpatine is actually pointless, so why bother?  So, when it was a sealed one, that was a pretty easy sale for me.  It’s not a terrible set.  It doesn’t have the broader appeal of other Cinema Scenes, since none of them really work outside of the setting.  On the other hand, it makes it one of the truest sets to the actual concept, so I guess there’s that.