“Deeply spiritual, Chirrut Imwe believes all living things are connected through the Force.  Though he lacks Force abilities, the warrior monk has rigorously honed has body through intense physical and mental discipline.”

Remember what I was mentioned yesterday about Hasbro doing a whole set of Rogue One releases for Black Series?  Well, in addition to the all-new Bodhi figure, they also did re-issues of the other members of the main team. While I got a handful of the original releases, I missed out on a few of them the first time around, so this provides me a second chance to get them.  One of the ones I missed was today’s focus, Chirrut Imwe.

Chirrut Imwe is figure 4 in the Rogue One set of Black Series figures.  He’s a reissue of the #36 figure from Phase III of the line, which hit during the latter part of the original Rogue One run.  The figure stands a little over 5 1/2 inches tall and he has 27 points of articulation.  The Rogue One figures were, unfortunately, not the line at its best when it came to articulation schemes.  Chirrut represents one of the worst instances, honestly.  The range on the arms and legs, especially at the elbows and knees, is quite restricted, with the elbows barely making even a full 90 degrees.  In addition, the actual layout and functionality of the joints is just kind of odd.  You can get some poses out of him that work, but they’re not particularly intuitive.  Chirrut’s sculpt was unique to him at the time, and remains so to this date.  It, like the articulation scheme it sports, is a product of 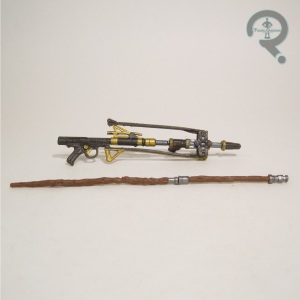 its time.  It’s not terrible, but it’s not great either.  A lot of it’s because the aforementioned articulation’s not really worked in all that well.  The arms and legs again get the worst of that particular issue.  The head’s at least got a pretty solid likeness of Donnie Yen, which is definitely the strongest part of the sculpt.  His robes are a mixed media affair, making use of cloth pieces for the bottom portion. It works out alright, and does at least allow for a little more mobility, albeit somewhat limited by the actual articulation.  Chirrut’s paint work is overall rather basic.  The general colors match up to the on-screen attire, and the printing for the face is an incredible improvement over the prior release’s paint.  Chirrut is packed with his staff and his lightbow.  They’re both pretty solid pieces, especially the lightbow, which is made up of four moving parts, allowing for it to be properly collapsed and deployed.

The assortment that contained Chirrut’s original release was never plentiful at any retail locations near me.  By the time I actually saw one in person, it was obvious that Hasbro wasn’t going to complete the team line-up, so I didn’t see the point in expanding the set beyond the main three.  With Hasbro circling back around and completing the run, I figured it was worthwhile to finally snag him.  He’s admittedly a bit outpaced by more modern offerings, but at least he’s a little better than the first release. 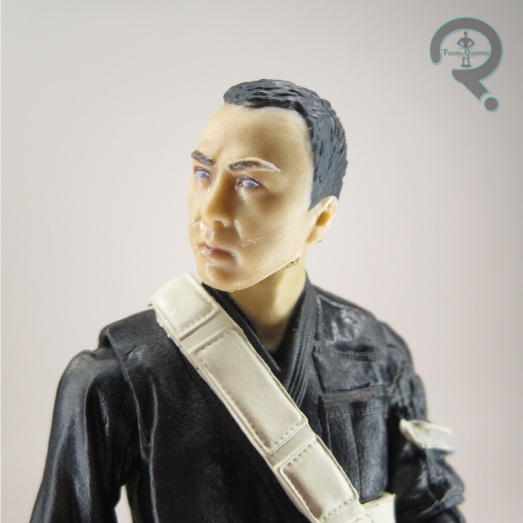