“Mister Miracle is an incredible escape artist who can free himself from any trap or ambush. By calling upon a multitude of advanced scientific gadgets, and his remarkable dexterity and agility, Mister Miracle is able to make any impossible stunt look easy.”

It’s that post-Christmas review time of year, and the best way for me to really, truly feel that post-Christmas-y sort of vibe is, quite frankly, Kenner’s Super Powers.  From a rather early age, they’ve kind of been a key piece of the stuff I get for holidays, and that’s become especially cemented in the last few years.  In my last four Super Powers reviews, (the most recent of which was almost an entire year ago; for shame!) I’ve stuck with the line’s Fourth World component, which really influenced the last two years of the run.  I’m continuing that trend with today’s review, which looks at perhaps my favorite Fourth World character, Scott Free, aka Mister Miracle! 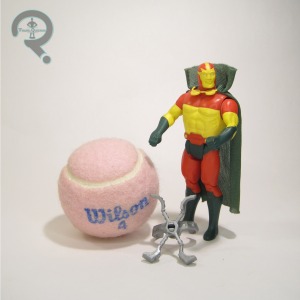 Mister Miracle was released in 1986, as part of the final year of Kenner’s Super Powers line.  As with a lot of characters in this line, this release was Scott’s first figure, and would remain his only figure until DC Direct put one out in the early ’00s.  Of course, he was still ahead of all of the other New Gods barring Darkseid there, so I suppose it’s not all that bad.  He and his assortment-mate Orion made up the entirety of the heroic New Gods portion of the line, which was otherwise much heavier on the Apokolipsian bad guys.  The figure stands 4 1/2 inches tall and he has 7 points of articulation.  Mister Miracle’s sculpt is a unique one based on his standard comics design, which was honestly a pretty notable thing for a New Gods character.  Only he and Darkseid got that treatment.  Admittedly, when you’ve got a design as spot-on and cool as Mister Miracle’s, what exactly is there to change?  It translates well to the style of the line, and he’s got a pretty solid set of proportions, as well as a nicely defined selection of costume details.  As with all the caped characters in the line, Scott’s cape is a soft-goods piece, though it does get a rather unique clasp piece, which is quite a bit of fun.  Mister Miracle’s paint work is pretty decent, although it’s rather prone to wear.  Mine’s in pretty decent shape, but that’s no small feat.  Scott is packed with a set of shackles, which are a trick set-up.  They’re on a joint at the middle, and squeezing his legs moves his arms outward, as if he’s escaping from the locks.  It’s a little iffy on this 35 year old figure, of course, but it’s otherwise a good gimmick.

Mister Miracle is the latest addition to my ever growing Super Powers collection, given to me as a Christmas gift by my ever supportive parents.  He’s actually been pretty high on my list of the remaining figures I needed, barred only by the difficulty of finding him in complete condition.  Getting one in this shape is honestly astounding, and he’s just so much fun.  Truly one of the line’s star pieces.  And with that, I only need 5 more.  Crazy.