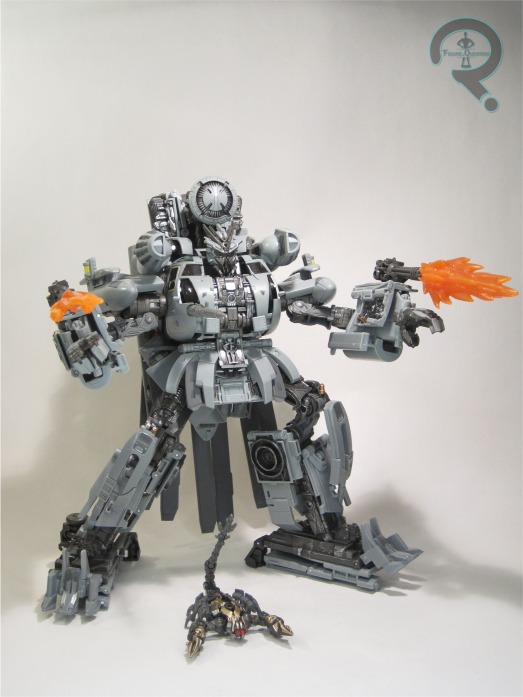 I really don’t talk about the Michael Bay Transformers movies much around here.  It’s for the pretty good reason that I just didn’t much care for any of the Michael Bay Transformers movies, so, you know, I just don’t have much call to own stuff from them, or by extension review much from them either.  Thus far, I’ve looked at a Soundwave and a Jazz, characters that, notably, I care about outside of the Bay films, so that colors the opinions ever so slightly.  On a different, but still related note, I’ve not yet reviewed anything from Takara’s long-running Masterpiece line of Transformers, which are rather high-end, generally more screen accurate figures, which also seek out proper licensing for all of their alt-modes (where needed, of course).  It’s been a running theme since 2003, at first sticking to G1 characters, but moving onto other themes, with the live action films getting their own sub-line starting in 2010.  The most recent release from the live action sub-line is actually a twofer, since it’s Blackout and Scorponok, based on their appearance in the first film, and I’m taking a look at the two of them today! 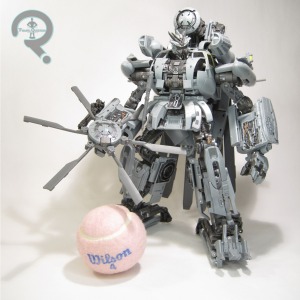 Blackout and Scorponok are the lone 2022 release for Transformers: Masterpiece Movie Series, where it is item MPM-13.  Though billed as “Blackout and Scorponok” on the package, Blackout is clearly supposed to be the star piece, with Scorponok as an accessory.  In his robot mode, Blackout stands about 11 1/2 inches tall and he has 32 points of workable articulation.  In terms of scaling, Blackout is certainly quite a sizable figure, which is appropriate, since he was also one of the larger ‘bots in the films.  The articulation scheme is a pretty good one for a Transformer, especially one as bulky as this one.  Of particular note are the hands, which even have separately articulated fingers.  Blackout’s sculpt is a unique one (thus far, at least; if they follow the Studio Series layout, he might get a re-use for Grindor later down the line), obviously based on his film appearance.  In the movies, most of the TFs are kind of a jumbly mess of random angles when in their robot modes, and Blackout is no exception.  On the plus side, the toys, by necessity, do clean things up a little bit.  This figure does a pretty good job of doing just that, while still sticking pretty closely to the design as seen on-screen…I mean, when it can be seen, which is, admittedly, pretty tricky to do.  They sure did love to hide those designs.  Whatever the case, this one is pretty cohesive in his look, and he’s properly big and imposing, and there’s a ton of smaller sculpted details, which are pretty impressive. Blackout is packed with two mountable miniguns, two blast effects for the miniguns, and a rotorblade weapon.  The rotorblade should *technically* be mounted to the back of his hand, as opposed to being held in his hand is it is here, but otherwise it’s a pretty cool piece.  Also included is the previously mentioned Scorponok figure.  He doesn’t transform (excusable, since he doesn’t actually have an on-screen alt-mode in the first movie), but he’s at least fully articulated, which is honestly pretty cool. 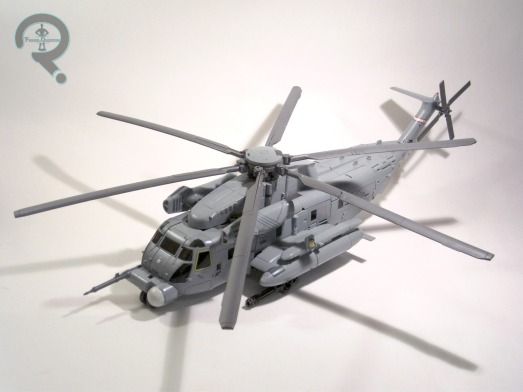 As in the film, Blackout’s alt-mode is a MH-53 Pave Low helicopter, which is an officially licensed take on the vehicle.  The transformation sequence to get from robot to copter is…well, it’s certainly a complicated and lengthy one.  It’s unfortunately a side effect of how the animation models were done for the Bay films, since 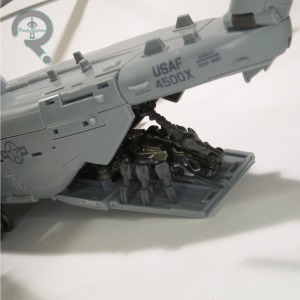 there wasn’t really much actual science or engineering to how they worked; just lots of small greebly bits all moving in a mess of motion.  So, this figure’s dealing with that, but it does alright by it.  Still, it would up taking me about an hour and a half to work my way through the whole thing; getting his waist properly folded into the body of the copter was, in particular, quite tricky on my copy.  All in all, it’s a bit nerve-racking, but the end result is at least pretty convincing.  He’s even got a working hatch on the rear fuselage, where you can store Scorponok. 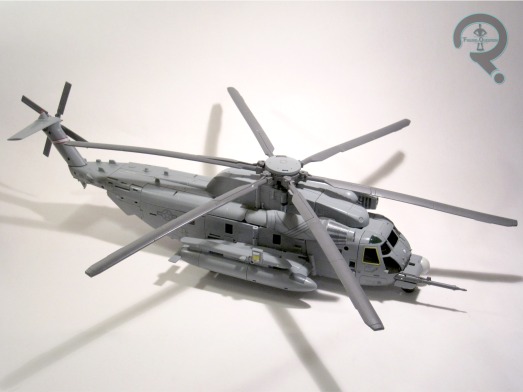 As I touched on in the intro, I don’t really do much with the Bay films.  I saw the first one in the theatre.  It wasn’t really for me, and I’ve not really owned any of the associated product.  So, why do I own a Masterpiece quality figure based on a not Soundwave or Jazz character?  Well, my son Matthew was determined to get me something cool for our first Christmas together, and he was apparently adamant that he needed to get this for me.  (He also apparently found it on some sort of crazy clearance, which is good, because I really don’t expect him to be spending this thing’s full retail on a present for me)  On Christmas morning, after jumping up and down with excitement over the things waiting for him under the tree, he very excitedly handed me this guy, and told me I had to open my gift first.  I was certainly surprised, I’ll say that much.  I may not really care about the first Transformers, or really Blackout as a character, but I’ll admit, he does certainly make for a quite impressive transforming robot toy.  And, you know, the whole presentation did kind of help to further my general enjoyment as well.  So there’s also that. 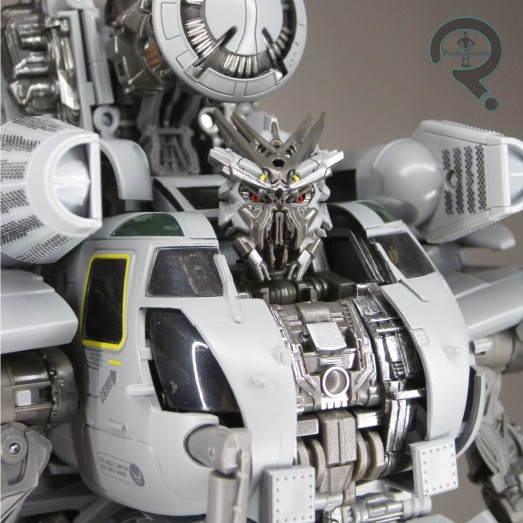