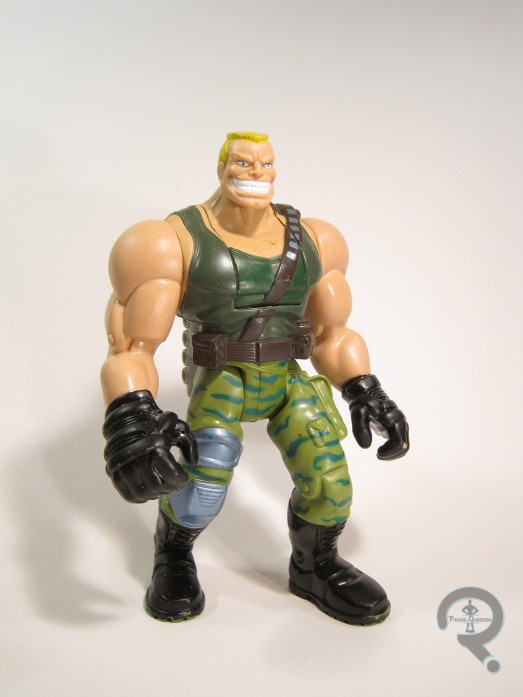 Back in April, I looked at a pair of figures from Small Soldiers, which is probably one of my favorite movies (I know, Ethan likes the movie about the action figures.  What a shock).  The figures in the movie, built by the legendary Stan Winston Studios, are really, really cool.  There was a tie-in toyline from Hasbro (who also helped design the on-screen figures), which don’t quite capture the awesomeness of their onscreen counterparts, and was sadly short-lived.  That being said, something is better than nothing, right.  Today, I’m taking a look at one of the villainous Commando Elite, Sgt. Brick Bazooka!

Brick Bazooka was released in the first series of Small Soldiers figures from Hasbro.  Unlike Archer and Chip Hazard, this was Brick’s only figure in the line.  This figure is more or less captures his basic look from the film.  He’s about 6 1/2 inches tall and he has 5 points of articulation (well, technically he’s got 6, but one of those is tied directly into his action feature).  As I noted in the last two Small Soldiers reviews, the articulation on these guys is by far the most disappointing aspect. That we couldn’t even get elbows and knees is the worst part.  But, three figures in, I can kind of move on from it.  There’s two aspects of the sculpt: one good, and one sort of weird.  One the good side, from the front, the figure’s a pretty good representation of the “sculpt” from the movie.  He’s got the buzzcut and the super creepy grin down pat, and while he’s not a pitch-perfect recreation of the film design, he fits in well with the other figures in the line, which is really the most important thing.  So, about the weird.  You know how his name has Bazooka in it?  Well, apparently, that means he needs to actually turn into a really big gun.  Because toys or something.  Anyway, the gun swings forward from his back, with his head flipping through the torso, and…stuff.  It’s kinda weird.  I can’t say it adds much to the figure, and it means that he’s got this huge gun sticking off of his back even in normal mode.  It looks rather strange.  The paint work is pretty much on par with the other figures I’ve looked at.  It’s clean, it matches pretty well with the colors on the screen, and all-around looks like what you see in the movie.  There are a few missing details here and there (which was true with the others as well), and mine sort of beat up, but that’s understandable.  Brick was packed with two large guns and a missile for his chest-gun-thingy.

When I was growing up, I didn’t have a Brick Bazooka figure, but my cousin Rusty did, and I was always a bit envious of that, because I thought he was a really cool figure.  For whatever reason, Bazooka’s one of the rarer Small Soldiers on the after market, so I didn’t see one for a good long while.  Brick ended up being a birthday gift from my parents, who picked him up for me from 2nd Chance Toyz.  This guy’s really goofy, and totally a product of the ‘90s, but that’s kind of what I’m about. 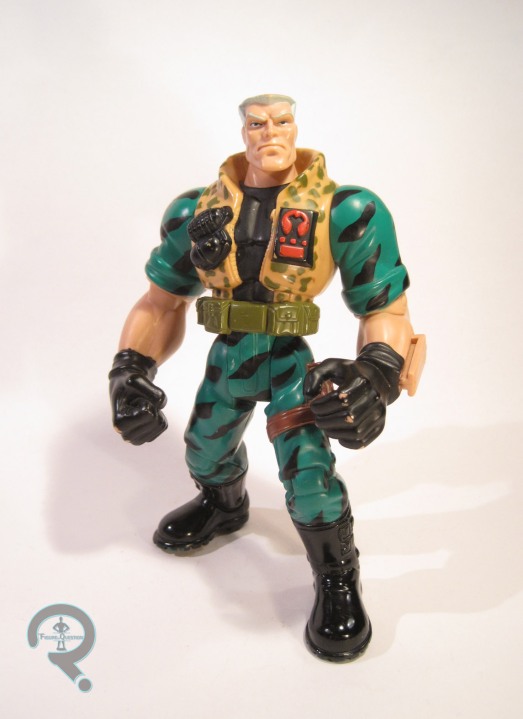 Small Soldiers does a fair bit of subverting people’s expectations. The title, the marketing, and the casting of the typically heroic Tommy Lee Jones as Major Chip Hazard (countering the usually villainous Frank Langella as Archer) all point to the Commando Elite as the assumed heroes of the piece. Heck, they even brought in Hasbro, who made their name with the “Real American Hero” G.I. Joe, to help design the figures seen in the movie. Their foes, the Gorgonites, are all grotesque monsters, clearly designed to make the Commando Elite look extra heroic by comparison. But the movie wastes no time showing the audience how wrong their perceptions were, and the Commando Elite quickly prove themselves a perfect antithesis to the noble Gorgonites; they’re cold, calculating, and with a desire to win their battle at all costs. Tommy Lee Jones’ Hazard is the worst of the bunch, a perverted, twisted version of the classic heroic soldier archetype. 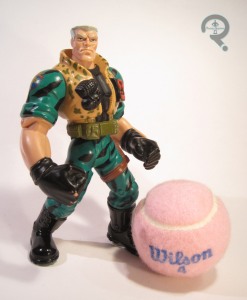 Chip Hazard was released in the first assortment of Small Soldiers figures. Hazard would go on to get the most variants of anyone other than Archer, but this one presents him in his actual look from the movie. Well, more or less. The figure is about 6 ½ inches tall and he has 5 points of articulation. Yep, he loses the waist articulation, making him even less articulated than Archer. Wrong direction, guys! I’ve already harped on the articulation issues in my review of Archer, so I won’t get into it again. It should have been better, but that just wasn’t the case. Hazard’s sculpt is a bit more stylized than Archer’s; he still more or less resembles his on-screen counterpart, but his proportions have been made more “90s heroic” (smaller head, larger arms/hands). The likeness on the head is close, but not as close as Archer’s. Hazard still has sculpted, faux joints, but his are a bit less visible than those on Archer, which kind of hurts his representation of the toy in the movie. In addition, there are a few details that are missing or changed from the movie to this figure. He lacks the dog tags sported by his on-screen counterpart, as well as his customized belt buckle, and he has two smaller grenades in place of the single larger grenade he had in the movie.  Lastly, he his left forearm has protrusion (meant to attach to his accessory) which sticks out as being just sort of tacked on. Hazard’s paintwork is generally okay. The colors match up closely enough, which is good. The camo patterns are, understandably, not quite as detailed as the one’s movie Hazard had. The arms and legs make out perfectly alright in this respect, but the vest doesn’t work as well, with the pattern looking more like cheetah’s spots than a standard camo pattern. The grenades end up being the wrong color (they should be roughly the same color as the belt), and his belt buckle remains the same color as the rest of the belt, despite being red and silver in the movie. Hazard included a big missile launcher thing, which attached to his left arm. My figure doesn’t have this piece, but that’s just as well.

As I noted in my Archer review, I didn’t really have any of the Small Soldiers figures growing up. I think my cousin may have had a Chip Hazard (I know for sure that he had a Brick Bazooka) but I never did. I ended up finding Hazard at 2nd Chance Toyz last October, at the same time I got Archer. Of the two, Hazard’s the weaker figure. He’s less accurate to the source material, has less articulation, and generally just a less entertaining figure. However, being less entertaining than Archer doesn’t mean he’s not entertaining, and having the pair of them does inherently make both a bit more awesome.