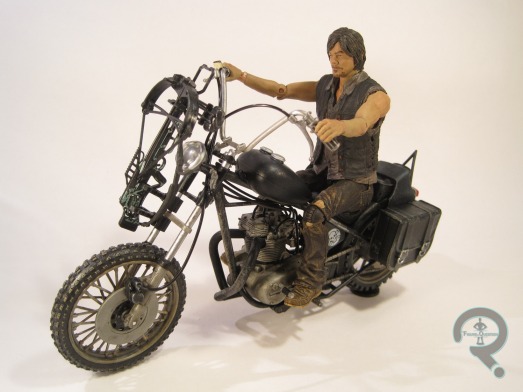 It had a rocky start, but McFarlane’s The Walking Dead line is really becoming one of the better toylines around.  I recently looked at a few of the figures from series 5, and was quite impressed overall.  Today’s character is fan-favorite Daryl Dixon, who was actually one of the very first characters released in the line, way back in series 1.  However, that figure had more in common with Kevin Federline than it did the esteemed Mr. Dixon, so he was definitely one of the most requested re-dos.  McFarlane seems to be pulling out all the stops for Daryl, and went ahead and released him along with his distinctive chopper.

Daryl and the Chopper were released as a boxed set, which is loosely serving as a supplement to series 5 of the main line.  Daryl stands about 5 inches tall and has 27 points of articulation (the box says 25, but it’s 27.  Perhaps McFarlane needs to work on their counting skills?).  Daryl has a brand new style of hip articulation for the line, and it’s definitely an improvement over the other figures.  Hopefully, McFarlane will be making this a standard feature.  The accuracy of Daryl’s headsculpt seems to be a matter of opinion, with some claiming it’s spot on and others claiming it’s totally off.  I fall somewhere in between;  it’s not a perfect likeness, but it’s obviously Norman Reedus.  The rest of the figure’s sculpt is tremendous.  All of the clothing has the appropriate textures and such, and it really looks like a real person.  The paintwork is pretty good.  There’s no real slop, and there’s some dry-brushing and washes that help bring out the sculpted textures.  Daryl includes a knife that can be sheathed and his trusty crossbow, which has three removable arrows.  There are slots for four arrows, so I may have been shorted one.

The Chopper is more an accessory to Daryl than its own item, but the work put into it is still top notch.  The bike is about 4 inches tall and 6 inches long, and it has movement in four places.  The sculpt is nothing short of amazing.  All the parts line up correctly, and it’s perfectly scaled to Daryl.  The tires are even real rubber, which is a cool touch.  The paintwork is exceptional, which plenty of texturing and weathering, as well as the appropriate logos and such.  The license plate even has realistic wear, so it really looks like it’s been through an apocalypse.  The Chopper includes two bags that can be set on the back, as well as a small stand to allow it to be displayed on the shelf without the kickstand down.

I picked this set up from Amazon, back when it was up for pre-order.  I honestly only picked it up for Daryl, but the Chopper is amazing piece of work, and shouldn’t be overlooked.  Overall, this continues the upturn in quality from McFarlane, which is definitely cool to see.  I can’t wait for the next series!