Boba Fett may be the go-to bounty hunter of the Star Wars universe, but he and all of his bounty hunting pals owe just about everything to one guy: Greedo Q. Kazoo.  Okay, it’s really just Greedo.  No last name.  Or first name.  It’s just the one name, really.  Like Michelangelo. Or Beyonce.  I’m getting sidetracked.  Anyway, Greedo was instrumental to introducing the whole wider bounty hunter thing to the Star Wars universe.  He’s probably my personal favorite bounty hunter, truth be told, due to having a fun design, serving a clear purpose, and generally not being overhyped (unlike some *other* bounter hunters out there).  Greedo’s had a few figures over the years, including one during the infamous Power of the Force II incarnation from the ‘90s, which I’ll be looking at today.

Greedo was released as part of the second 1996 assortment of Star Wars: Power of the Force II.  Interestingly enough, Greedo’s not one of the figures pictured on the back of the packaging.  This marked Greedo’s second time as an action figure, after his original vintage figure.  He stands about 3 3/4 inches tall and has 6 points of articulation.  The PotF2 sculpts were generally stricken by ‘90s uber-stylization, but as the line moved forward, the stylizing slowly worked its way out.  Coming from the line’s second year, Greedo already shows some of the steps forward, being a lot less pre-posed than some of the earlier figures were; there’s still a slight bit of a mid-step thing going on, but it’s hardly an extreme pose.  He’s still a little on the buff side (which is further accented by the slightly tighter fit of the clothes), but it’s fairly minor.  He’s helped by his more alien design, which helps to mask some of the faults.  From a purely aesthetic standpoint, his sculpt is definitely solid.  The head is a pretty pitch-perfect recreation of the Greedo mask seen in the movie.  It’s perhaps a bit underscaled, but I actually think it looks slightly better that way.  There’s also a ton of really sharp detail work, not only on the head, but also on the rest of the body sculpt.  While he’s certainly not going to be outdoing the Black Series figure or anything, he’s still sporting a very well-crafted sculpt.  The sculpt is topped off with a decent paint job.  Nothing particularly fancy, but all of Greedo’s basic colors are there, and the application is all pretty clean.  Greedo was packed with two blasters; one large, one small.  The smaller blaster is based on Greedo’s sidearm from the movie, and, aside from being a little sized-up, is pretty accurate.  The larger piece is made up for the figure, but hey, at least they gave him something extra, right?

I didn’t have Greedo growing up (in fact, my first proper Greedo figure was actually the Black Series figure).  This figure was another that I grabbed during this past Farpoint’s charity auction, alongside a handful of other PotF2 guys.  I’ve actually eyed this figure a few times before, and, like Kaylee and Cobra Commander before him, the good cause was enough to finally convince me to pick him up.  I’m glad I did, because he’s definitely one of the better PotF2 figures Kenner put out.

Today, I’ll be looking at the final figure from the second series of Star Wars: The Black Series.  Okay, technically, going by the numbering on the figures, he’s the second to last, and Han, who I reviewed yesterday, is the last.  But this is Greedo, and every good Star Wars fan knows, he does NOT get a shot at a review first.  So, yeah, I’ll be looking at Greedo, punching bag of the Star Wars universe.

As I said above, Greedo is part of the second series of Star Wars: The Black Series.  He’s #007, and he’s based on the only possible look to base Greedo on, the jumpsuit/vest combo he wears during his fatal encounter with Solo.  Greedo is the tallest figure in the series, standing just over 6 inches, and he features about 20 points of articulation.  Like everybody else in the wave, he’s got a brand new sculpt.  It looks good, and seems to be accurate to Greedo’s look from the film.  The vest is a separate sculpted piece, with a fairy basic jumpsuit sculpt underneath.  I wouldn’t be surprised to see Hasbro reuse parts of this figure in future waves.  Greedo’s head and hands are his most distinctive parts, and they’re rendered well.  I don’t know if they’re 100% screen accurate, but they’re certainly close enough for me.  The paint on Greedo is actually a bit better than the rest of the wave.  He’s got a little bit of slop on the yellow stripe on one arm, but other than that everything looks pretty sharp.  I was most impressed by the fact that the yellow detailing continues under the vest, where it’s rendered virtually invisible.  It’s a nice touch that most companies would over look.  Greedo is topped off by a blaster pistol.  This is a bit light when compared to the others in the series, but there are very few things one can give a character who appears for less than five minutes.  Unless the wanted to throw in an alternate torso with a hole in it, but that seems a bit morbid.

Greedo is a surprisingly cool figure.  I wasn’t sure I really wanted him, but I bought a full set in order to get Han and Boba.  Having Greedo in hand, he’s become one of my favorites.  I hope that Hasbro puts this much effort into some of the more important characters. 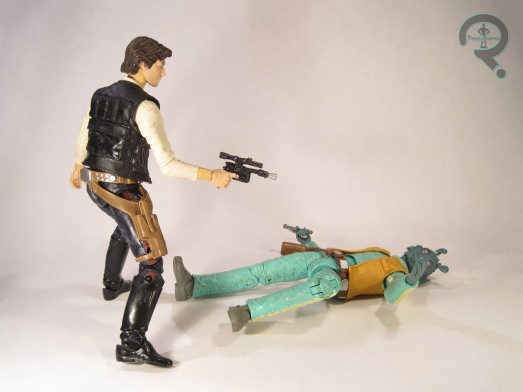