Justice League: War is far from one of the greatest pieces of animation DC has produced. That being said, it’s also far from the worst (I’m looking at you Flashpoint Paradox…), and I felt it even managed to improve upon the source material a fair bit. The animation proved to be nice a smooth and the design work wasn’t too bad. If they can manage to get some slightly better stories, then perhaps they might get back to where they used to be in animation. Wouldn’t that be nice?

I felt that one of the better aspects of the movie was its handling of Wonder Woman. She’s a character that DC seems to have a lot of trouble getting. War provided a strong and likeable version of the character, which shows that maybe they might have a chance of getting the character the recognition she deserves some day. When I decided to pick up a few of the figures from DC Collectibles’ tie-in toyline for the movie, I knew I wanted Green Lantern right off the bat, but the film’s take on WW convinced me I should get her too. Let’s find out if that was a good move! 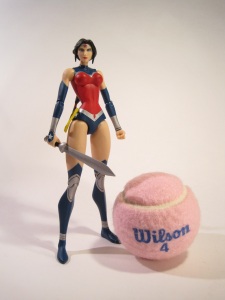 Wonder Woman is part of the first series of Justice League: War by DC Collectibles. She’s based on the character’s design from the movie of the same name. The design draws some interpretation from Wonder Woman’s current costume in the comics, but they’ve taken more liberties on her than they did on Green Lantern. The costume features higher sitting boots, pseudo-sleeves, and actual covering on the collar area. The figure stands about 6 ½ inches tall and features 13 points of articulation. They’ve removed the bicep swivels that were present on GL, which limits the movement, but does look better from an aesthetic standpoint. Wonder Woman’s sculpt is completely unique to her. This is most likely due to her being the only female in the line. Still, I’d be curious to see if DCC would re-use the body for any later females, given her Amazonian stature. The sculpt is pretty good, and does a fair job of translating the movie’s design into three dimensions. The figure is about two-thirds legs, which seems a bit more stylized than she was in the movie. She almost looks as if her legs and the rest of her go to two different figures. Still, she’s better than a lot of female figures, and a lot of it can be written off as keeping with the movie’s style.

The paint on Wonder Woman is pretty good. Her paint job is a bit more intricate than GL, so there’s a bit more room for error. She suffers from some fuzzy lines on the edges of her boots and sleeves, but they aren’t too noticeable, and they’re certainly better than Hal. Her eyes have been given a red-ish hue, which almost makes it look like she’s been crying. Not sure what they were going for there, but it doesn’t seem to have worked. Also, her skin tone seems to be a bit light compared to what she had in the movie, which is a shame, because it added some nice diversity to the group. I suspect this was done so that they could use the same skin-tone plastic on all of the figures. Wonder Woman includes her lasso of truth, which is glued to her waist, and a sword, which seems oddly short.

I picked up Wonder Woman and GL from Amazon a few weeks ago. My review probably seems a little down on the figure, but in actuality I quite like her, perhaps even more than Green Lantern. I’m a huge Green Lantern fan, so that’s saying something. Justice League: War presented perhaps one of my favorite Wonder Woman designs, so getting a figure of it is a plus. This figure has a few issues, but as a whole, I think it turned out pretty well. If you’re a Wonder Woman fan, I’d certainly recommend it. Heck, I’m only a moderate Wonder Woman fan and I think it’s pretty darn cool!

Every so often, I have to go back to the basics. In my case, the basics tend to be either DC or Marvel figures. Bonus points if they’re animation related!

As a kid, most of my DC action figures were based on the cartoons of the time, Batman: The Animated Series being chief among them. DC Collectibles (formerly DC Direct) has recently announced that they plan to do a rather extensive line of figures based on B:TAS, which excites me greatly. I’ve been away from DCD/DCC collecting for a while, so I thought I’d see what to expect from the new line by taking a look at a few figures from their line done to tie in with the recent Justice League: War animated feature. Being me, I started with Green Lantern. Just go with it!

Green Lantern was released in the first series of DC Collectible’s Justice League: War line. He’s based on the character’s design in the film of the same name, which is in turn inspired by the character’s current look in the comics. The most distinctive piece of the GL figure is the streamlined nature of the design. The figure is about 6 ½ inches tall and features 13 points of articulation. The articulation is fine overall, but he could really use some ankle and wrist articulation, the lack of which is becoming a disturbing trend in the action figure industry. Still, the lack of these points isn’t quite as detrimental here as it was on, say, Mattel’s recent General Zod. He’s certainly less stiff looking. A lot of this has to do with the sculpt, which, while it isn’t perfect, does have a decent fluidity to it. The sculpt, aside from a new head, is shared with series-mate Flash. It’s a pretty good starting point. The physique looks to be accurate to the design from the movie, and is basic enough to work for a few different characters. The head is a pretty great likeness to GL’s design in the movie, and has a nice amount of character. The figure mostly relies on paint to depict his costume details. It’s mostly straight forward work, and it’s decent but not perfect. He’s got quite a few fuzzy lines, especially on the edge of his neck. The painted on ring is also a bit sloppy, almost like it hasn’t been completely painted. Piece by piece, GL is sloppy, but he actually looks pretty darn good as a whole. The figure includes no accessories, which seems like a missed opportunity.

This figure is something of an experimental purchase for me. I had a slight interest in it when it was announced, mostly due to the whole Green Lantern thing. Once the first series was released, I just kind of forgot about it and moved on. A few weeks ago, I was house sitting for a friend. He had told me I was welcome to watch any of the movies on his shelf, and I noticed he had a pretty much complete set of the DC Animated Movies. I’d fallen a bit behind on them, so I decided to catch up. JL: War wasn’t my favorite movie ever, but it was entertaining enough for me to decide to go ahead and pick up a few of the figures. I’m glad I did. Even if GL isn’t perfect, he’s a nice enough figure that I’m happy to add him to my collection.