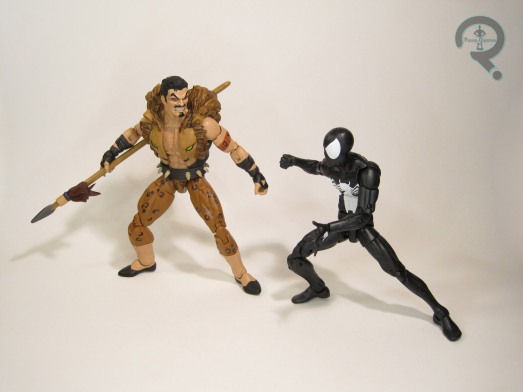 “Unwittingly bonded with an alien symbiote, Spider-Man has the enhanced strength and abilities he needs to take on his deadly enemy, Kraven the Hunter.”

The last time I reviewed a Kraven figure, I remarked that long-running lines require a somewhat cyclical nature.  Well, uhh, I’m now reviewing a re-release of Kraven from that very line…so, hey, here we are.  Guess we’ve already come back around to him, haven’t we?  I, of course, already had the previous Kraven, but one more certainly couldn’t hurt too much.  Nor could one more of the Spider-Man he’s packed with!

Spider-Man and Kraven are a Target-exclusive Marvel Legends two-pack, clearly patterned after the much-loved “Kraven’s Last Hunt” storyline.  The set started hitting shelves just a few weeks ago, and will hopefully be showing up in plentiful quantities throughout the summer.  Both figures are tweaks of prior figures that have packed up a sizable aftermarket price. 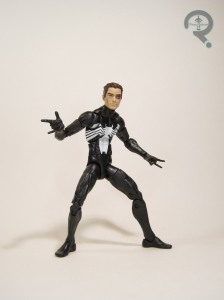 Spider-Man’s black costume (or at least a cloth copy of it) was central to “Last Hunt,” and is enough of a fan favorite that a re-release of his Sandman Series figure definitely makes sense.  The basic figure is essentially identical.  Same base body and head, and for the most part, the same paint scheme.  The symbol is ever so slightly different, with the head being a little wider.  It’s minor enough that you’d only notice the change with both releases side by side.  The main change-up is the accessories.  They were kind of the let-down of the original release, but this one amends that.  He loses the open gesture hands of the original, but exchanges them for the missing web-pose hands that were sorely missing the last time.  He also gains an alternate unmasked head, which is a re-paint of the unmasked head from the Spidey/MJ pack, now featuring some battle-damage.  Of course, since I still don’t have that, I’m just building a continuing collection of non-standard Parker heads. 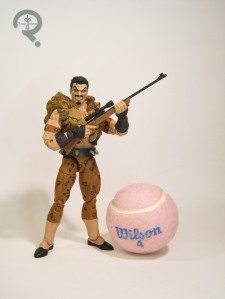 Kraven’s been absent from Legends longer than Spidey’s black costume.  His Rhino Series release was four years ago now, and just predates a lot of collectors getting into the re-launched line, meaning he still goes for a bit of a premium.  His re-release is definitely the main driving force of this set.  Where Spider-Man was a fairly straight re-issue, Kraven is actually quite different from his prior release.  Where that one was his most recent appearance, this one is a classic Kraven.  He gets a new head, right hand, and belt, and swaps out the boots of the last release for more streamlined parts.  The head is by far the best piece; the crazed expression is a perfect recreation of Mike Zeck’s Kraven from “Last Hunt,” and it’s a marked improvement over the more generic sculpt of the last release.  Another marked improvement?  The paint.  It’s sharper, bolder, and just generally better detailed than the last release.  Hasbro’s definitely gotten a lot better at this part of the figures.  Kraven includes the same spear as the prior release, and also adds in a hunting rifle, which is a pretty classic Kraven sort of piece.

Since I have both of the original releases, when this set was originally announced I didn’t know if I’d be picking it up.  The images of the new Kraven head definitely did a lot to sell me on him, but the Spider-Man didn’t look to have much new to offer.  I was out looking for the Endgame Hawkeye and Widow (who I still haven’t found), and came across this set, and upon seeing the unmasked head and webshooter hands was definitely sold.  Both figures included are improvements over their original releases, and I don’t regret grabbing this one at all. 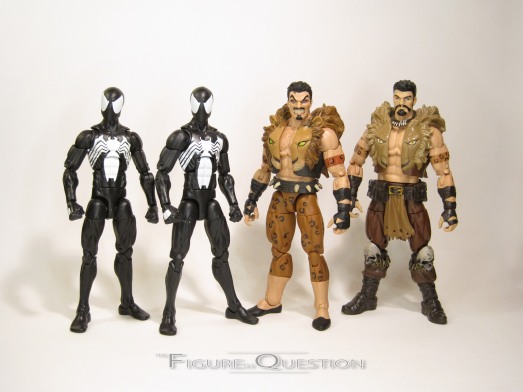 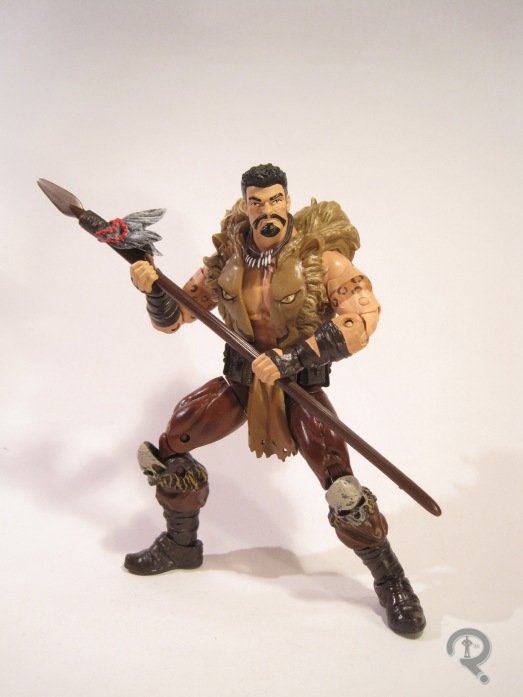 Long-running toy lines have a habit of becoming cyclical with character selection, almost by necessity. With anything you do for a lot of time, there will inevitably be changes stylistically, as processes become more streamlined, good and bad methods are weeded through, and mistakes are (hopefully) learned from. This means that figures at the beginning of a toy line probably won’t fit in so well with those from much further down the line. If you want your most popular characters to still fit in, you have to update them every so often. Take today’s figure Kraven: his last figure in the Marvel Legends (and Spider-Man Classics) line was released ten years ago. That’s a good long while. Seems Hasbro felt that was too long, as he’s part of their latest series of Marvel Legends, just hitting now! 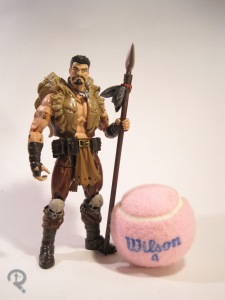 Kraven (aka “Savage Force”) was released in the most recent set of Spider-Man Marvel Legends Infinite Series. He shares his name (but not his Build-A-Figure piece) with fellow Spider-Man foe the Chameleon, who is also his half-brother, which I did not know. You learn something new every day. The figure is roughly 6 ¼ inches tall and features 32 points of articulation. Kraven uses Hasbro’s new, slightly larger male body, first introduced with Grim Reaper. Kraven is, of course, the first two-handed character to use the body, so he’s got that going for him. In addition to the base body, the figure has an all-new head, as well as unique pieces for the forearms, hands, shins, and feet and add-on parts for his vest and belt. The pieces do a great job of making Kraven quite different from his body-mate Reaper. The head sculpt is probably the weakest piece of the figure; it’s not terrible, or anything, just a little bit on the bland side. It lacks some of the character of previous Kraven sculpts, and has a bit of the sameness that’s plagued so many of the male Legends sculpts. From the neck down, the detail work is fantastic. The clothes are full of texture and layering that really sell this guy as Kraven THE HUNTER. The lion’s mane and loincloth also have a great flow to them, which gives the figure a nice action styling to him. The paintwork follows the trend set by the sculpt. The head’s paint is just passable; the edges of the hair and mustache are rather sloppy, and he’s got the same eye issue as Misty Knight. The rest of the paint is pretty solid work, and the clothing has some really nice wear and tear to it. Kraven is packed with a spear, which befits a hunter, as well as a piece of Rhino, which also befits a hunter, I guess.

I hadn’t initially planned to pick up Kraven, given that I’m only a moderate fan of the character. But, the more I looked at the figure, the more I liked it. And, I’d be lying if I said I didn’t want to see another use of the new body sculpt. The fact that I ended up going for the complete set kind of sealed the deal. Slight issues with the head asides, the figure is a great update to the old Kraven figures. 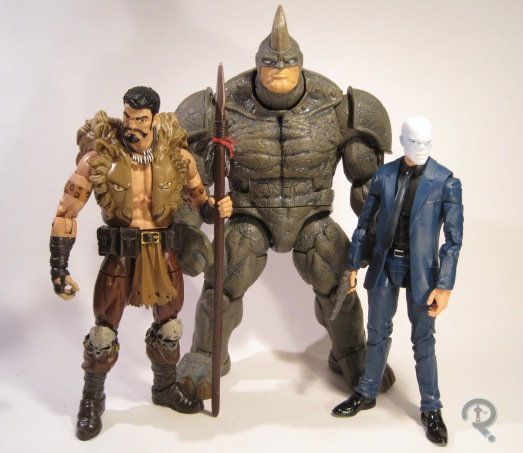 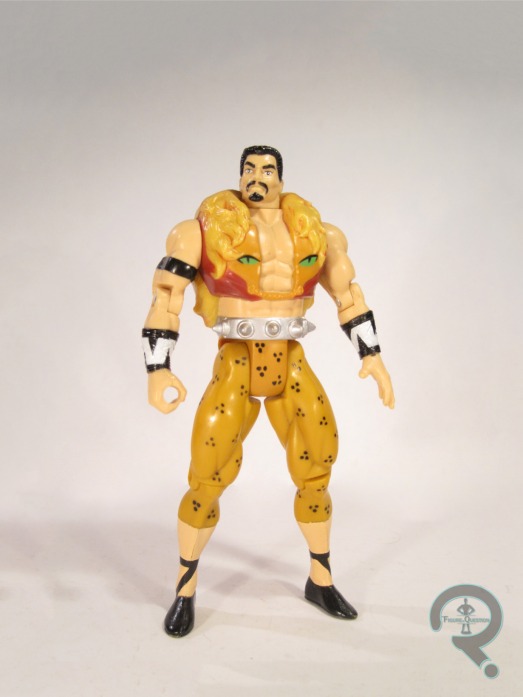 Remember my review of Unmasked Spider-Man from just last week? Good, that means this intro can be a bit shorter. Like that figure, this one hails from ToyBiz’s Spider-Man: The Animated Series line from the 90s, and also comes from one of the boxed sets ToyBiz released exclusively through BJ’s Wholesalers. This time around, it’s Kraven the Hunter, one of the classic Spider-Man foes. He was a hunter looking for a more exciting hunt, which led to him fighting Spidey on numerous occasions and eventually joining the first incarnation of the Sinister Six. Let’s see how he turned out!

Kraven was released in the BJ’s exclusive Monster Mayhem set, which also included 5 other figures, all repaints. Kraven stands about 5 inches tall and has 9 points of articulation, which were both standard for the line. Kraven is 100% re-use, being a repaint of the main Spider-Man line’s own release of Kraven. The previous Kraven was based on his cartoon appearance, whereas this one seems to be more comic based. The biggest difference present is this figure’s leopard patterned pants in contrast to the previous figure’s black pants. The sculpt is a pretty good one, and is pretty in line with the classic Kraven design, so I can’t blame them for re-releasing it in a more comic accurate palate. The paint work is well applied and clean overall, and it appears to be a bit more detailed than the single release figure. Kraven included no accessories, which is a shame, because his hand is obviously molded to hold one.

I acquired this BJ’s exclusive at KB Toys. Yes, you read that right. Apparently, BJ’s would only actually hold on to these sets for a short while before selling them to KB for the rest of the distribution. Hey, it works for me. Anyway, I was on a trip to the beach, I think right before my brother was born, but I don’t recall for certain. My dad took me to the nearby KB and they had this set there. I had known about its existence, thanks to the internet, but I hadn’t seen it in person. I remember being pretty happy to get it, though it wasn’t really for Kraven. Still, he’s a decent figure, and does help bring back the memories of getting the set.