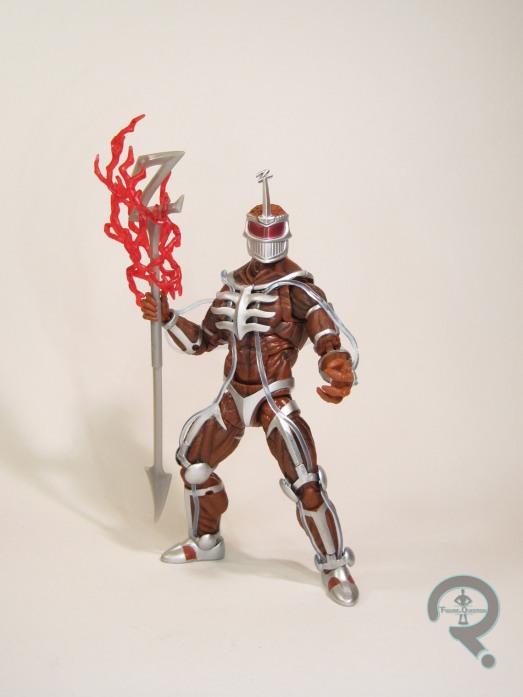 “I am Lord Zedd, Emperor of all I see. You have failed to complete the mission assigned to you. I will now resume command. Prepare the planet for my return!”

For the second season of Mighty Morphin’ Power Rangers, Saban decided that they wanted another big bad to pair off with the first season’s Rita Repulsa.  There was just one slight problem: no such character existed in the original Japanese material they were importing.  So, it was up to them to introduce their own.  Enter Lord Zedd, a villain so frightening that parental complaints led to him eventually getting toned down.  Given his US-based nature, Zedd’s been less lucky than the Rangers when it comes to action figures.  Fortunately for him, he was right at the forefront of Hasbro’s recently launched Lightning Collection.

Lord Zedd is the second of the four figures that make up the first series of The Lightning Collection, designed to pair off with the White Ranger also featured in the assortment.  The figure stands 6 1/2 inches tall and he has 34 points of articulation.  Unsurprisingly, he follows the same basic construction-style as the White Ranger, which is a slight departure from the articulation schemes on Black Series and Legends, but is actually a very solid layout, and I’d wager it’s something Hasbro’s probably going to try to phase into their other lines as well.  Zedd is another all-new sculpt, as one would expect; there aren’t exactly a lot of characters that Zedd could share parts with.  It’s a pretty solid match for what we see in the shows, albeit adjusted ever so slightly to remove some of the “guy in a rubber suit” elements that the real Zedd possessed.  The star element is definitely the head, which capture’s Zedd’s distinctive visage quite nicely, and isn’t horribly under-scaled like the Bandai offerings tended to be.  The body is…a little less impressive.  They’ve followed the same lead they went with on the White Ranger, so he’s a base body with armored elements on top.  Not a terrible idea, and honestly much nicer looking than the solid-construction Bandai figures, but the add-on elements are a very soft plastic.  While this worked well for the White Ranger’s chest armor, on Zedd’s more piece-meal affair, it leads to some parts that are a little floppy.  On my figure, the leg guards pop out of place a lot, as do the wrist bands whenever you go to change the hands. Posing him is definitely not quite as much fun as it was with Tommy.  That said, he sure does look the part.  Aiding in him looking the part is the paint work.  The silver armored elements are a stark, clean silver, while the “flesh” elements get a wash to bring out all of the recesses of the body, doing a pretty solid job of capturing Zedd’s intimidating presence from the show.  Zedd is packed with two sets of hands (two open gesture, one gripping, one fist), his signature staff, a lightning effect piece, and a growth bomb.  Not a bad load out at all.

Since acquiring my Figuarts Rangers, Zedd’s been at the top of my list.  He was pretty much off the table with Figarts, but with Hasbro taking over, I had renewed hope, and it paid off, because here he is.  Of course, I’m not the only one desperately waiting for a Zedd, and he’s the shortpack of the first assortment, so he’s by far the most difficult figure in the set to get ahold of.  I wasn’t able to get one from All Time’s first shipment, but lucked into one being traded into the store loose just a couple of weeks later.  He’s not as strong a figure as the White Ranger, and that’s only further punctuated by him having a lot more riding on him.  With that said, he’s unquestionably the best Zedd figure ever made (not that it takes much) and he is still a solid offering.

Remember yesterday’s discussion of US-exclusive looks from the Mighty Morphin’ Power Rangers? Well, prepare to meet the king of the no-Japanese-counterpart brigade, Lord Zedd. Yes, one of Power Rangers’ coolest bad guys was not in the original source material. That seems almost criminal. Fortunately for Zedd, he hasn’t been as absent from toys as the movie-style Rangers, but it’s still kind of a big deal when he gets a figure with the same level of care devoted to him as the Rangers.

Lord Zedd was part of Bandai’s Mighty Morphin’ Power Rangers 20th Anniversary line, which, like the movie line, was released exclusively at Toys R Us. Zedd was the line’s one non-Ranger. The figure is a little over 5 inches tall and has 17 points of articulation. Like yesterday’s White Ranger, his range of movement is hindered by his lack of some key joints, but this is a little less of an issue for Zedd, who did a lot of standing there looking menacing. Zedd’s sculpt was all-new to him, and it’s a decent enough sculpt. He’s a little devoid of texture, and he’s definitely got a bit of a pin-head thing going on, and his articulation is even more obtrusive than the White Ranger’s, but the overall sculpt is alright. What really ends up holding him back is the paint, which does the sculpt no favors. The lack of any sculpted texturing or fine detailing is only made more obvious by the straight, shiny colors. Rather than being a truly frightening, skinless monster, he’s just kind of this….red mess. It causes him to lose pretty much all of his menace, which really sucks, cuz that’s most of what Zedd’s got going for him. In addition, the silver paint is all over the place, with tons of bleed over, so it’s not even well applied! Zedd includes his signature Z-topped staff. It’s okay, but not great. It definitely feels too short, and it’s got this random bit in the middle where it’s just wider, for no real reason.

I picked up Zedd at the same time as yesterday’s White Ranger. He too was purchased by my far too supportive Super Awesome Girlfriend. I’d actually looked at this Zedd figure a few times before. Since he’s not in the Super Sentai stuff, it’s highly unlikely he’ll find his way into the SH Figuarts line, meaning this is likely the best we’re going to get. All-in-all, he’s not a bad figure, just kind of a mediocre one.