“When Robbie Baldwin is exposed to an extra-dimensional energy source, he becomes Speedball, able to project a kinetic energy field allowing him to bounce like a super-powered rubber ball!”

Introduced in 1988, Speedball was one of Marvel’s active attempts at recapturing the success of Spider-Man through another young hero, going so far as to include Steve Ditko in the character’s creation, just for that extra push. Though he ultimately didn’t meet their expectations, he did find some notoriety as a member of the New Warriors when that book was launched just a few years later.  He’d go on to become a defining member for the team throughout its many iterations, right up until they got totally discarded in order for big shocks in Civil War, at which point we got sad emo boy Robbie becoming the ultimate edgelord Penance…yeah, it’s not great.  But it’s okay, because he’s back to being Speedball, and now he’s even got an action figure, which I’m taking a look at today.

Speedball is figure 4 in the Controller Series of Marvel Legends, which is ostensibly an Avengers assortment.  He’s the fourth member of the founding New Warriors in the line, following Night Thrasher, Firestar, and Nova.  Fingers crossed for a Justice figure in short order!  This is Speedball’s first figure, though Robbie did get a Minimate as Penance.  But I don’t wanna talk about it.  You can’t make me.  ….Anyway, the figure stands 6 1/2 inches tall and he has 34 points of articulation.  Speedball is built on the 2099 base body, which is a more than respectable choice for the character.  The build’s a pretty good match, and the articulation scheme, especially with those butterfly joints on the shoulders, makes for a lot of fun posing.  It’s a solid basic body choice for a guy with a pretty basic costume set-up.  It’s only real downside is that we still have the expose pins on the elbows and knees, but it’s going to take a little bit for such things to completely disappear from the line.  Speedball gets an all-new head sculpt, and it’s very definitely the star piece of the figure.  The hair has a wonderful dynamic flow, giving it that crazy flop that was so signature to the 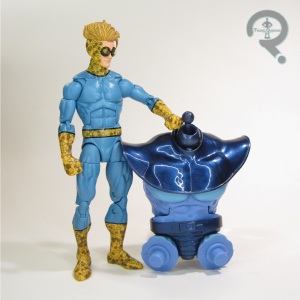 character’s look.  Gambit *wishes* his hair was this chaotic.  The face has a nice warm and friendly expression that feels right for a fun-loving guy like Robbie, and the goggles, which are separate pieces, top of the look pitch perfectly.  Speedball’s color work surprised me in its quality.  Not only is the base application all clean and sharp, they also handle his distinctive patterning on his gloves, belt, and boots quite well, without missing any noticeable spots or cutting anything too keep it simpler.  His face and hair also get a far bit more accenting than we’ve typically seen on the Hasbro Legends, which really just gives the whole thing a really polished feel.  If I have one complaint about this figure, it’s that he doesn’t get any accessories of his own.  A recoloring of the Havok/Polaris effects with his multicolored kinetic energy would have worked decently in a pinch, I feel.  That said, it’s not the end of the world, I suppose.  Ultimately, he’s packed with the torso for the Controller, which is the largest piece, so the box is far from empty feeling.

When I was seven, I bought an issue of Wizard magazine because it had a feature on the upcoming Avengers: United They Stand cartoon, and I wanted to know everything I could about it.  Said issue also included a free preview copy of the latest iteration of the New Warriors at the time, which of course had Speedball front and center.  I’d not encountered him previously, and while I wouldn’t actually read most of his early New Warriors appearances until much later, the character’s distinctive visual always stuck with me.  I hated what they did with him in Civil War, and was always bummed that his only Minimate was as Penance.  So, this figure?  I was fairly excited.  He looked like a cool by-the-numbers figure.  In hand, that’s not what he is, because, despite the base body build, he’s not just a by-the-numbers figure.  He’s got a lot of care put into him, and he’s so much fun.  He’s simple, but he’s thus far my favorite Legend of the year.  And there was a Havok and a classic Cap this year, so that’s pretty high praise by me.

“The founder of the New Warriors, Dwayne Taylor is a martial arts master clad in a special combat suit.”

Night Thrasher!  He’s the Thrasher what thrashes at Night! Yeah…that’s all I got.  The New Warriors are a team I can definitely appreciate as a team, made up of characters I definitely won’t turn down as action figures, but I can’t say I know too much about any of them, Night Thrasher included.  As the bio notes, he’s the team founder, and was one of the active members during the team’s ill-fated mission that kicked off the events of Civil War, leading to his death.  But it’s comics, so that didn’t really stick.  Now he’s got an action figure!

Night Thrasher is figure 4 in the Kingpin Series of Marvel Legends.  He’s not the first New Warrior we’ve gotten, but Nova and Darkhawk were far more modern than he is, so he’s definitely the first one to really commit to it.  The figure stands 6 1/4 inches tall an he has 32 points of articulation.  Night Thrasher’s built on the Bucky Cap body, though like a good number of the recent figures to be built on it, he’s mostly built out of adjacent parts.  The only true Bucky Cap parts are the upper legs and pelvis.  He also makes use of Beetle’s torso, and Taskmaster’s arms and lower legs, as well as a brand-new head sculpt and add-ons for his belt and the bandanna on his leg.  The Beetle and Taskmaster pieces are inspired choices for the figure, and actually end up being quite close to Night Thrasher’s typical comics get-up.  It’s also nice to see them turn up again, since they hadn’t really shown up since their first use.  The new head is a good translation of Night Thrasher’s distinctive helmet from the comics, and is made with a few different parts glued together, allowing for some proper depth to the design.  The belt is interesting, because at first glance it’s identical to the one used on Puma.  However, Puma’s belt has an extra detail stamped on the front that Night Thrasher lacks, meaning they aren’t just the same mold.  I’m genuinely amazed that Hasbro didn’t just use paint to differentiate the two.  Whatever the case, it’s a nice belt.  The one piece I’m not super crazy about is that bandana on his leg, because it never wants to stay in place, and just generally gets to be rather annoying when posing the figure.  Night Thrasher’s paintwork is pretty solid, and not quite as simple as it might look at first glance.  The finish on the black sections of the costume is different depending on if it’s supposed to be armor or cloth, which keeps him from being too one-and-done.  The red sections are suitably eye-catching, and the use of accenting helps to highlight all the nice sculpted details in his belt.  Night Thrasher is the best accessorized figure in the set.  It starts off with the a re-use of those same batons we’ve gotten so many times prior, but they’re made more awesome by the inclusion of a back-pack to mount them on (the back-pack also conveniently covers the wing ports from the Beetle torso).  He’s also got his skateboard, which is a pretty awesome piece in its own right, and can also be stowed on his back when he’s not using it.  I really appreciate his ability to keep all of his accessories on him.  It makes him feel like a more complete package on the shelf.  Lastly, he comes with the left leg of Kingpin.

Despite not being overly familiar with the character, Night Thrasher was one of the figures I was most looking forward to from this set.  Something about his design just seems so inherently toy-etic.  Hasbro did a really good job on this guy, and wisely balanced new and old parts to make a very unique feeling figure.  I foresee this guy being a real fan-favorite.

Night Thrasher from my friends at All Time Toys.  He’s currently in-stock at their webstore.  If your looking for other Legends or other toys both old and new, please check out All Time’s website and their eBay storefront.