Hey, does anyone know what time it is?  Don’t worry, I do!  It’s “DC’s in-house toy company abandons it’s flagship line in favor of a completely new completely incompatible one”-o’clock!  …Wait, I think that might just be the time on my end.  Sorry, I don’t subscribe to the standard clock concept.  I go more for abstract reference clocks.  Just wait til it gets to be “SDCC exclusive rereleases are the literal devil”-thirty.  That’s when things go off!

Strange time-keeping jokes aside, it’s really a common trend for DC Collectibles (and their predecessors, DC Direct) to constantly abandon current projects in favor of new ones that let them re-release the same crop of heavy-hitters over and over again.  The latest example of this is their DC Icons/DC Essentials change-over.  Icons was itself a tonal shift for DCC, and had some rough beginnings, but it was finally shaping up into a respectable line, just in time for DCC to completely drop it in favor DC Essentials.  Essentials is basically the same concept as Icons, but done in such a way that the two lines are completely incompatible.  Cue the need to release all those heavy hitters again!  Amongst the line’s debut offerings, there is exactly one character who wasn’t covered by Icons, and not coincidentally, he’s the one I’m looking at today!

Reverse Flash is figure 4 in the first assortment of DC Essentials, making him chronologically the last of the set.  He’s designed to pair off, unsurprisingly, with the standard Flash figure that’s also in Series 1.  He’s technically a modern take on the character, but since he’s essentially had the same look for most of his career, it’s more or less his classic design.  The figure stands 7 inches tall and he has 34 points of articulation.  Let’s just ignore the height issue, because we all knew that was coming.  He’s a full inch taller than any of the Icons figures, and  3/4 inch taller than the average Legends release.  That’s the way it is, and that’s not going to change.  Okay, so, with that out of the way, let’s tackle the other big thing here, which is the articulation.  Overall, it’s very good.  The movement on the joints is solid, and they’ve finally captured that Legends-style articulation they were aiming for.  They’ve even improved on it slightly, especially on those ankles.  But something is rotten in the state of Denmark…and it’s that abdominal crunch.  The actual joint is fine, but you know what’s not?  Those huge, obvious peg holes on either side of his ribs.  They’re just out there, naked, on display, like some sort of joint whoo-ore.  I know it’s a minor flaw, but they really, really jump out at me.  Moving past that, how is the actual sculpt?  Actually pretty good, but not without some slight drawbacks.  He uses the same basic body as the other three figures in the set.  Overall, it’s a decent offering, but the arms are about a half an inch too long for this body.  With the right pose, they look okay, but it’s a little off looking.  I’d like to see them fix this issue for future uses.  The head sculpt is definitely the star piece of this figure.  It’s suitably unique from the basic Flash figure’s head, and the evil smirk is absolutely perfect for Thawne.  The hands are also unique, and while I do like them a lot, I’m not sure how I feel about them being the only hands included here.  Reverse Flash’s paintwork is very clean, very bright, very bold, and extremely eye-catching. Very top-notch work.  Reverse Flash includes no accessories, which is a real let down given the price tag on these figures.  At the very least, he should have an extra pair of hands.

I was apprehensive about this line, because I’d quite grown to like Icons, and I was honestly a little bitter about the last handful of Icons figures being cancelled seemingly to make way for Essentials.  I’m also really, really not looking to buy yet another set of the main DC heroes.  But I saw Reverse Flash in person at Cosmic Comix, and I kind of caved.  I’ve still got some mixed feelings.  There’s a lot I like about this figure, but there are a lot of minor mistakes that I feel DCC would be able to avoid if they didn’t feel the need to shake everything up every couple of years.  And, above all, he doesn’t go with anything I own, which is perhaps the most frustrating thing, since, as I said, he’s a solid figure. 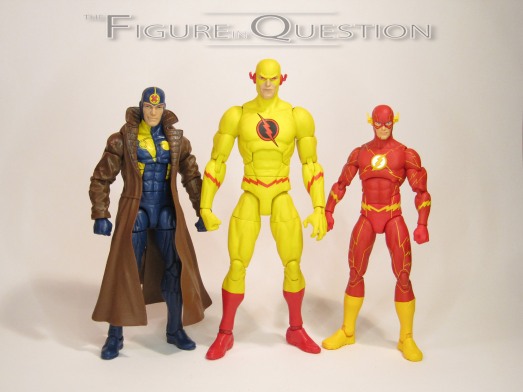 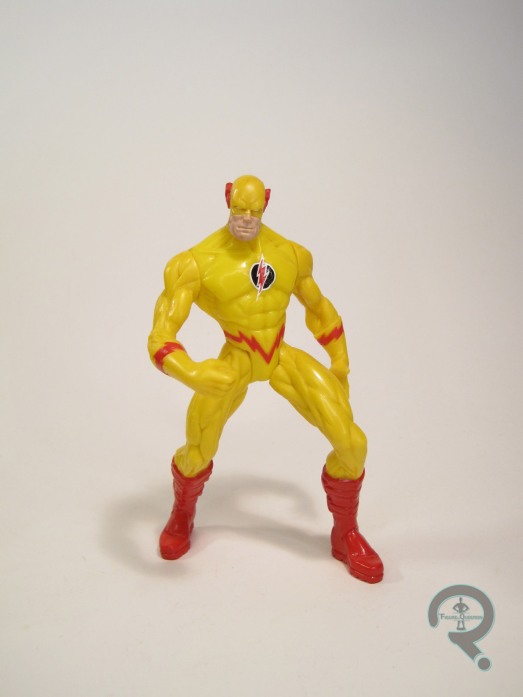 It’s not uncommon for superhero stories to introduce a villain that’s some sort of dark reflection of the hero, but there are few instances as straight forward as Professor Zoom, the Reverse Flash.  Reverse is right there in the name.  Toy makers are fond of this particular character, since he’s a pretty easy palette swap of the Flash.  I’m looking at one of those figures today. 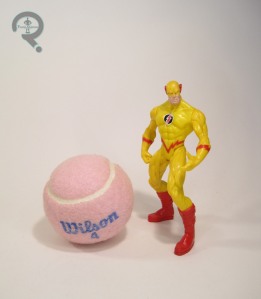 Reverse Flash was released in 1999 as a ToyFare magazine exclusive continuation of Kenner’s Total Justice toyline.  Despite how easy it is to make the character, this would be his very first figure (though one was planned for Kenner’s Super Powers line before the line ended).  The figure stands 4 3/4 inches tall (and would be closer to an even 5 if he were standing up straight) and he has 5 points of articulation.  The sculpt for this figure is, predictably, reused from the main line’s version of Flash. Now, if you want to get technical, it’s a Wally West Flash, and Professor Zoom should have Barry’s costume, but the differences are minor enough that it’s not really worth complaining about.  As far as the quality of the sculpt, it’s got all the hallmarks of this line, with the proportions and muscularature being super exaggerated and the whole figure being super pre-posed. Of course, the pre-posing is less of an issue here, since they gave him more of a running pose.  Zoom’s paint is reasonable enough.  It’s a bit brighter than the corresponding Flash was, and the yellow looks a touch goofy with how blindingly bright it is.  Also, the contrast really isn’t there between the eyes and the mask, like it was on the Flash.  Perhaps black eyes might have worked better?  It’s not terrible, though. Reverse Flash included no accessories, but since all the main Flash got was tactical armor, I don’t feel like he’s really missing out.

It’s this figure that’s the whole reason I even know this character exists. Back when I was much smaller, I saw him on a dealer’s table at a Farpoint.  He was too pricey for me to get at the time, but my dad explained the character to me, and I’ve been intrigued ever since.  It’s taken a while, but I finally found this guy, courtesy of House Of Fun, last November.  He’s pretty simple, but still a lot of fun.