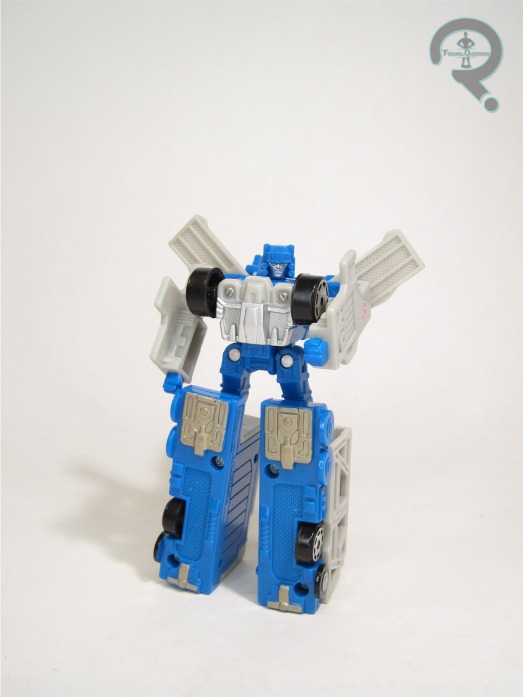 My personal experiences with Transformers are, admittedly, slightly different from most of those within my age bracket.  I was exactly the right age for Beast Wars, and yet was never really all that enamored by Beast Wars, which I suppose is slightly odd.  Ultimately, the first incarnation that really grabbed my attention was Armada, but before that one hit, I did have something of an appreciation for its immediate predecessor, 2001’s Robots in Disguise.  Perhaps most notably, it proved my first exposure to the wonder that was Ultra Magnus, albeit in a slightly angstier form than usual.  RiD‘s tie-ins were rather brief, since it was really just filler, but there were two Magnusi of note, one big, and one small.  I’m looking at the small today!

Ultra Magnus was released in 2002, as part of the fourth and penultimate wave of the Basic Class-sized Spy Changers for the Robots in Disguise line.  They are, effectively, equivalent to modern day Core Class figures, or, before that, Legion Class.  Magnus and his wave-mates were notable for being new-to-the-line molds, based directly on the RiD characters, rather than being reissues of older G2 molds or releases of previously shelved molds.  Magnus is, of course, based on his RiD design, which was something of a departure from his classic design (though not as far removed as some of the others, including Optimus himself).  Pretty much, he trades in his shoulder pylons for extra leg height.  That’s important thing really.  This is a Magnus that does not, under any circumstances, skip leg day.  In his robot mold, Magnus stands 3 1/2 inches tall and has 5 points of articulation.  Yes, he can move at his neck and shoulders, as well as getting some weird side-kicks on the hips.  This Magnus can do splits, and isn’t that what you’ve always wanted out of a Magnus.  The sculpt’s not actually too bad, especially given the scale and style.  It makes for a reasonable approximation of Magnus’ show model in robot mode, and while it’s got a fair bit of kibble hanging off the back of it, it’s not terrible looking from the front, or really even at a slight angle.  Really, it’s just the arms, and the bit of the back with the front of his vehicle mode hanging off of it that are weird.  Honestly, weird’s probably not even the right word; they’re more rudimentary than anything. 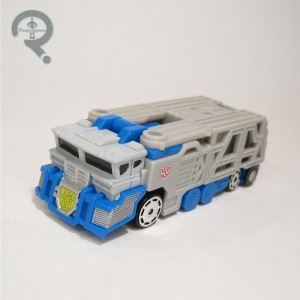 Rudimentary is generally an appropriate word for a lot of things about this figure, including his alt-mode, or more specifically, his transformation into it.  You pretty much just collapse him down into his alternate car carrier mode.  It’s not hard at all, and takes all of 30 seconds, and that’s if you take a break in the middle to stop your hands from getting all cramped and stuff.  He turns into an okay approximation of his some what sci-fi looking truck mode from the show, albeit one that seems a little bit on the squat side.  He’s got two sets of working wheels, and three sets of non-working wheels, which does seem a little wonky, but again, at the scale and price point, it’s not the weirdest thing.  Probably the weirdest bit is that they painted one of the three non-working sets; why not just leave them all un-painted?  I guess I shouldn’t complain too much about extra paint.

RiD was my first exposure to Ultra Magnus as a kid, and I thought he was just the coolest thing.  It’s amusing, in retrospect, because he’s a rather different take on the character, and not really the by the book Magnus I would come to love in later years.  I never had any Magnuses as a kid, which seems an awful shame, really.  I’ve been slowly amending that, and Max was here for the assist on this one in particular.  He was clearing out two large totes of Transformers junk from his garage, and this guy was in one of them, so he passed him along to me.  How thoughtful!  He’s not technologically astounding or anything, but he’s a fun little piece, and I can definitely get behind that.  Also, it’s another Magnus, so, you know, who am I to stop it, right? 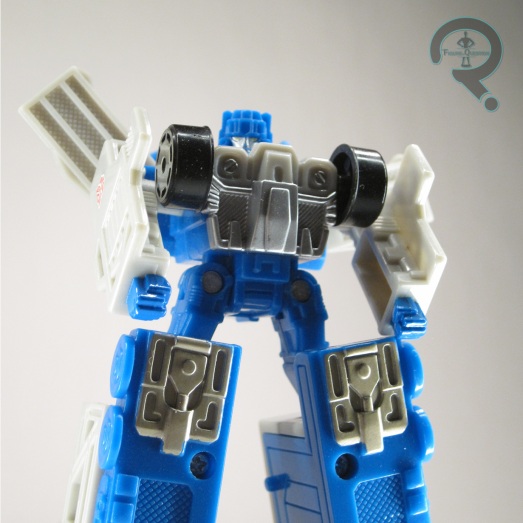 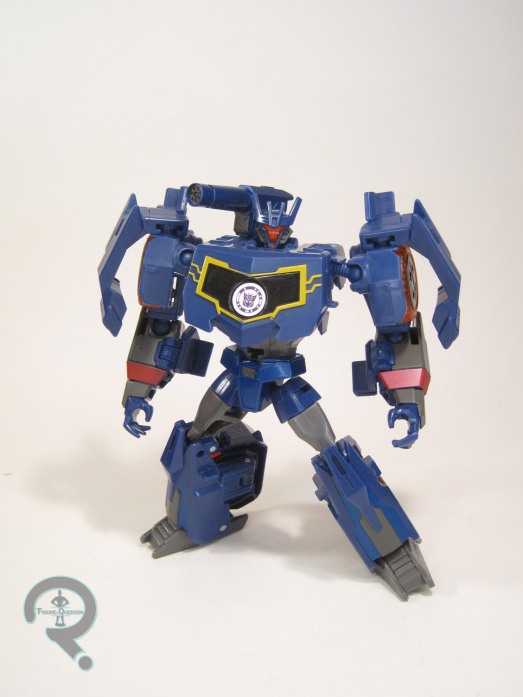 Another Transformers review?  Already?  It’s only been two weeks since the last one!  For someone who doesn’t really follow Transformers, I do seem to review a surprising number of them, don’t I?  Now, as I’ve said a few times in the past, my all-time favorite Transformer is Soundwave.  I tend to be drawn to figures of him.  Of my four Transformers reviews on the site, two are Soundwave.  But see, neither of them actually transformed.  Today’s review fixes that little wrinkle.  Let’s roll out!

Soundwave was released in the 10th Warrior Class assortment of the Transformers: Robots in Disguise toyline, based upon the cartoon of the same name.  He’s a part of the “Combiner Force” sub-line of figures.  From what I’ve been able to figure out from my researching the subject, this Soundwave is based on the characters design from around Season 3 of Robots in Disguise.  To the outside observer, this means he roughly translates to a decent approximation of the classic Soundwave design.  In his robot form, the figure stands 5 1/2 inches tall and has 19 points of workable articulation (counting his articulated shoulder cannon).  Given how restricted the actual movement on Jazz was, it’s actually pretty awesome just how many strides Hasbro has made improving that.  His sculpt is nicely handled.  Very clean, and lots if really sharp work, especially on the head.  He’s bulky, but sleek, and I dig the overall style.  Sure, the “real world” application’s sort of gone out the window, but I don’t mind so much.  He’s just a really cool looking robot design.  Soundwave’s alternate form this time around is some sort of a tank or something.  I’m not 100% sure exactly what it is, but I know it’s not a walkman, which does make me a little sad.  I’ll get over it.  There’s a 14 step process to turn him into the whatever it is, at least according to the back of the box.  I found 14 steps to be a little more fluid than the diagram on the back indicated and had a little trouble getting him to transform at first.  I did get it figured out in the end, and he makes for an interesting enough car-thingy, I suppose.  Soundwave’s paintwork is decent.  Not super complex or anything, but it works.  I dig the various transparent parts, and the light piping on the head is definitely a fun touch.

Why another Soundwave, you might ask?  Because sometimes I just really want to buy a figure, but there’s not anything new at retail.  And that’s when the Transformers start to tempt me.  Sitting there, looking kinda cool, and easily attainable.  A while back, I saw this guy and almost bought him, but talked myself out of it.  I ended up not seeing him again for several months, but I was admittedly not looking very hard for him.  Anyway, I was at Target the other night, trying to kill some time while Super Awesome Girlfriend was looking for a few things, and they had this guy there.  Since I hadn’t seen him, and he was relatively inexpensive, I figured he was worth it.  He’s pretty awesome, and I’m glad I grabbed him.  And now I’ve fulfilled my Transformers quota for at least a little while.