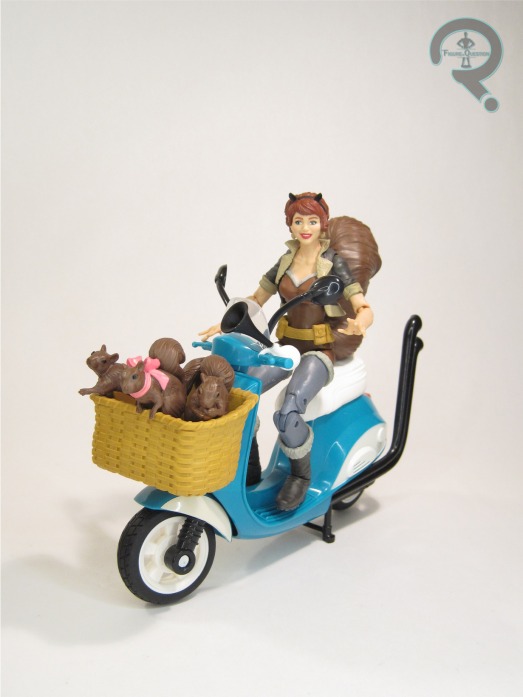 “With super squirrel powers and help from her three squirrel friends, the astonishing Doreen Green battles the baddest baddies in the universe!”

When she originally appeared in 1991, I don’t think anyone expected that Squirrel Girl would become a character that had *multiple* action figures, but here in 2020, we live in a world where that’s totally a thing.  Not only is Squirrel Girl a Marvel Legend, but she’s even based on her solo comic series…because again, that’s totally thing.  I guess in a comics world where Deadpool tops a lot of people’s lists, another irreverent hero isn’t the worst thing to be, allowing for the previously incredibly niche Doreen Green to find a nice little audience.  Hey, if it gets me a Squirrel Girl figure, I won’t complain.  Okay, I’m gonna complain a little, but there’s more context to it than that.  Let’s just jump into the review.

Squirrel Girl is a little difficult to slot into one of Hasbro’s already established sub-sets of Legends assortment themes, so for this release they opted to bump up her accessory component a bit and place her in the fifth assortment of the “Legendary Riders” sub-line.  This release opts for Doreen’s redesigned costume from her 2014 solo series, and, if I’m honest, that did take the wind out of my sails ever so slightly on this figure.  I don’t *hate* the design, mind you, but I can’t really say it’s my favorite, and being a fan of the character largely from her time with the Great Lakes Avengers, I was sort of hoping for that look.  That said, this look has had a fair bit of coverage, and it’s current, making it a wise choice from a marketing standpoint.  That won’t stop me from hoping we get the other costume down the line, though.  The figure stands about 5 3/4 inches tall and she has 29 points of articulation.  Squirrel Girl uses the Spider-Girl body as a starting point, but ultimately only ends up using the lower arms and mid legs from that figure.  Everything else is new, and for the most part pretty nicely rendered.  The multi-part costume looks sufficiently like real clothes, and the tail is actually sculpted in such a way that it doesn’t make her impossible to stand on her own, which is certainly a plus.  I’m not sure why the opted to give her two open gesture hands when she’s meant for a vehicle, but at least they aren’t fists, so you can at least fake that she’s holding those handle bars.  The head is the part of the figure I take the most issue with.  In part, this is due to the head having to adhere to the modern design, meaning it gets the headband with the ears, which I’m not big on.  Beyond that, though, she also runs into some issues of trying to adapt a cartoony design into a realistic figure.  They’ve tried to replicate one of her goofier expressions into a real-world look, and the end result is…well, it’s weird looking.  Max described it as looking “like she just smelled a fart” and I can’t really argue with that assessment.  It’s not the worst thing, but it’s just odd looking.  I think something a little tamer, or perhaps even a head that just actually went a little cartoonier would make for a better final product.  The paintwork on Squirrel Girl is pretty solid.  They make the shades of brown and grey that make up most of her look not totally drab and boring, and the application is all nice and clean.  There’s also some pretty decent accenting going on, which we don’t tend to see much of these days.  I can certainly appreciate that.

Squirrel Girl has a multitude of extras, the biggest being her scooter, which lets her fit that whole “Riders” theme of the line.  Like Black Widow and Deadpool, it’s not an item by which she’s really defined, and is more an excuse to fit her into this assortment.  That said, it’s not completely out of the ordinary for the character, so it’s not the worst thing.  It’s 4 inches tall

by 5 inches deep, and it’s got working wheels.  Sculpturally, it’s the same as the scooter that was included with Deadpool last year, just with a basket added to the front to hide the DP symbol that was on the front.  It was a pretty solid sculpt the first time around, and it is still cool here.  I do have to chuckle a little bit to myself about looking back on that old review, where I noted that DP scooter had less re-use potential than Widow’s bike, given that the scooter has been used twice now, and the bike hasn’t.  Oh well.  This is honestly the better vehicle sculpt.  This iteration of the scooter keeps its removable horn for the handlebar, which is a fun little piece.  Also included in this set are three different squirrels.  Presumably, the one with with bow is supposed be Tippy Toe (though she should be grey for true accuracy), and the other two are Monkey Joe and Mr. Lieberman, though which is which is really your call.  The three can all fit into the basket on the front of the scooter, though depending on your configuration of them, it can be a little snug.

I’ve been of mixed emotions about this set since it was shown off, and I’m still of mixed emotions after getting it in hand.  With that said, the final product is better than I’d expected it to be, even after looking at it in package.  This Squirrel Girl may not be exactly the one I wanted, and I may not be jumping up and down for joy at getting it, but it is better than nothing.  I’m still holding out hope for her other costume down the line (since they can re-use a number of this figure’s new parts), but until then, I suppose this one is fine.

Squirrel Girl was purchased from my friends All Time Toys, where she is currently in stock here.  If you’re looking for cool toys both old and new, please check out their website and their eBay Store. 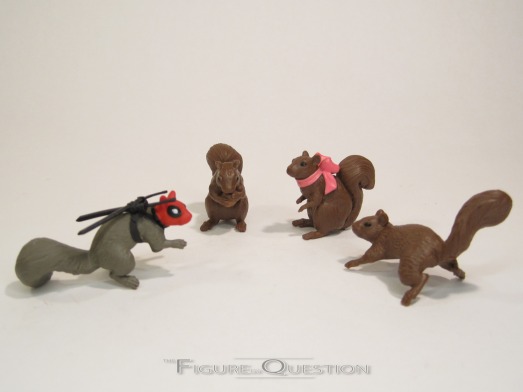 Squirrel Girl?  They made a Squirrel Girl?  Like, for real?  That’s awesome!  Now, for those of you wondering “who’s Squirrel Girl?,” let me ‘splain: Squirrel Girl is a minor character from the ‘90s, created by Will Murray and Spider-Man co-creator Steve Ditko.  In her very first appearance, she teamed up with Iron Man to defeat Dr. Doom.  Defeating Doom gave her something of a jokingly legendary status in the comics, and over the years, there was a running gag where she would reference beating some other infamous foe off-screen.  She was eventually added to the Great Lakes Avengers during Dan Slott’s mini-series in the mid-00s, which kind of cemented her status as a fan-favorite.  Since then, she’s bobbed around in the background of the Marvel universe, before eventually picking up her own series in 2014.  More recently, she’s cropped up in the Ultimate Spider-Man cartoon, which has netted her a Minimate, half the subject of today’s review!

Squirrel Girl and Jet-Pack Spider-Man are part of Series 3 of Walgreens’ exclusive line of Marvel Minimates.  Due to the slightly odd numbering scheme of the Walgreens assortments, this actually makes it the fifth series released, but whatever.  Squirrel Girl was granted her spot in this set thanks to an online fan poll, of which she and Man-Thing were the winners.  Spider-Man was granted his spot because he’s Spider-Man.  He does what he wants.  Both figures in this set are based on their appearances in the Ultimate Spider-Man cartoon.

This marks not only Squirrel Girl’s debut as a Minimate,  but also as an action figure in general.  As noted above, the figure is based on her animated design, which is itself a pretty straight adaptation of her comic design from GLA until around the time of her solo series.  It’s a pretty classic look, following all of the various comic book super hero conventions.  The figure is built on the standard Minimate body, with add-ons for her hair and her belt/tail.  Both add-on pieces look to be new to this particular figure, and they suit the character pretty well.  Some characters look a little lacking on the animated-style ‘mates, but I think Squirrel Girl is one of those that actually fits with the style a bit more.  It helps that her paintwork is really sharp.  The colors are remarkably vibrant for just being grey and brown, and all of the detail lines are really crisp.  She’s sporting a somewhat goofy grin, which is really the only expression a Squirrel Girl figure should ever have.  I also appreciate the shading, especially on the torso, which helps keep her from looking too blocky (I mean, yeah, she’s a block figure, but still…).  She’s missing a few of the seams on her arms and legs, but those are minor enough details that I don’t feel it really holds the figure back.  I’d chalk it up to simplifying the design for translation to the ‘mate aesthetic.  Squirrel Girl is packed with her three squirrels (Monkey Joe, Tippy Toe, and Mr. Lieberman.  Monkey Joe and Tippy Toe are from the comics, but it looks like Mr. Lieberman was added to bring the total up to three, for whatever reason), as well as a pair of burritos (apparently from an episode of the show), and a clear display stand.  The stand is more essential here than usual, thanks to the tail making it virtually impossible to keep her standing on her own.

So far, every Ultimate Spider-Man pack has has its requisite Spider-variant, and this set’s no exception.  You can sort of see them starting to reach with this one.  He’s pretty much just a basic Spider-Man, but with an extra accessory.  I suppose there have been worse variants.  The figure is built on the standard body, with the addition of the aforementioned jet-pack, which is an add-on piece.  The actual pack is the same one used for both Hope Summers and the Age of Ultron Nick Fury, but the straps are new to this particular figure.  I liked the jet-pack the first time I reviewed it, and it’s still pretty cool here, and the new straps actually make it nicely versatile.  The rest of the details are handled via paint, which is pretty decent overall.  He’s still exhibiting the slight bleed through issue on his eyes, which has been present on most of the recent Spider-Men.  That’s a bit annoying, but it’s less present here than on some of the other examples.  The rest of the paint is pretty clean, and replicates the look from the show, so I guess that’s pretty good.  Spider-Man was packed with a blast-off base that plugs into the jet-pack, a thumbs up hand (re-used from Buddy Christ), an extra surprised head, and a clear display stand.

I’ve not had much luck finding these sets at any of the local Walgreens, so I had to call on the help of my family to track them down for me.  My dad ended up finding this set for me a few weeks ago, which was very nice of him.  The Spider-Man I can kind of take or leave, but I’m really enthused to have a Squirrel Girl finally.  She’s definitely worth the cost of the set!