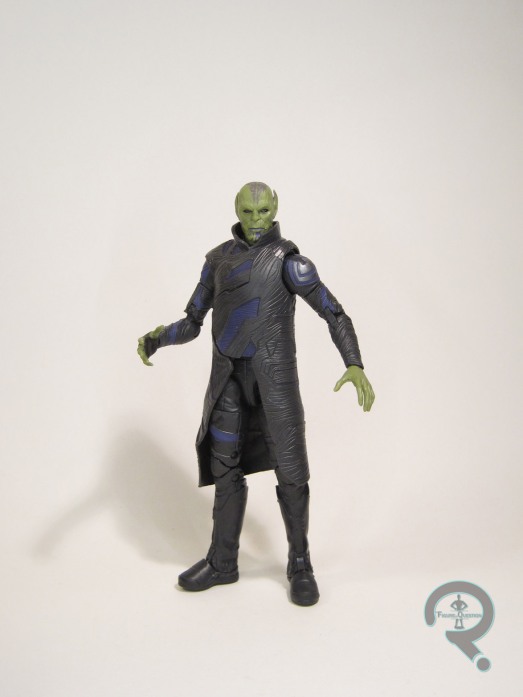 “Talos, perhaps the most cunning spy in all of the Skrull Empire, is a master of shape-shifting and international espionage.  An integral leader in the bitter Kree-Skrull war, the fearsome Talos will do whatever it takes to protect his own.”

Back in late 2011/early 2012, when we were eagerly trying to squeeze out ever possible detail we could about the upcoming Avengers film, the identity of Loki’s then-unconfirmed army (referred to in promotional materials as simply “REDACTED”) was one of the biggest sources of fan theorizing.  A very common guess were the Skrull, a well-established alien race in the Marvel comics, who were just coming off of a pretty big popularity boost thanks to 2008’s “Secret Invasion” cross over.  When the identity of the army was revealed as the Chitauri, the Ultimate Universe’s equivalent to the Skrull, it was confirmed that they were chosen due to the Skrull being tied up in the Fantastic Four licensing, and that the MCU wouldn’t be seeing their own Skrull Empire any time soon.  What a difference seven years makes.  Now, we’re not only getting our first taste of the MCU Skrull in Captain Marvel, but also getting toy coverage, courtesy of the film’s villain Talos, who I’m looking at today!

Talos is numbered figure 2 in the Kree Sentry Series of Marvel Legends, and is yet another Captain Marvel film-based figure for the assortment.  The figure stands 6 1/2 inches tall and has 30 points of articulation.  Talos is kind of the antithesis of the Nick Fury figure from yesterday in that, while he looks all-new at first glance, there’s actually a sizable chunk of re-use going on.  His torso, pelvis, and legs are all re-used from the Ragnarok version of Loki.  While the two designs aren’t exactly matches for each other in the films, the use of a new overlay piece on the torso, plus a new head and arms means that the only exposed similarities between the two are the legs, and they’re honestly close enough to the movie design that it works out okay.  The new pieces are pretty nicely rendered, with the head really being the star piece of work.  It seems like it’s a pretty solid match for Ben Mendelsohn’s Talos make-up, and the details are nice and sharp.  The jacket overlay piece is a little on the bulky side, but it’s far from the worst we’ve seen at this scale, and is nowhere near a limiting as similar pieces have proved.  It’s also removable, should you want to mix up his look, or possibly have a few non-Talos Skrull soldiers.  The paintwork on Talos isn’t anything super involved, but it’s still pretty nice looking.  The subtle purple lining the uniform works quite well, and there’s a nice lifelike quality to the way the face has been handled.  Talos includes no specific accessories of his own, but does still have the leg of the Kree Sentry BaF.  It’s a shame we couldn’t get anything character-specific, especially given the re-use on this particular figure.

The Skrull have a very distinctive design, but it’s one I’d yet to get as a Legends figure, so when this guy first surfaced, I was certainly intrigued.  Talos presents a nice update to the classic look, and the figure represents a decent repurposing of parts, and is another nice and unique figure for this assortment.

Like the last two figures, Talos was purchased from my friends at All Time Toys, and he’s still available here.  And, if you’re looking for other toys both old and new, please check out their website and their eBay storefront.