Hey, whoa, remember yesterday, when I reviewed a figure of a character played by Woody Harrelson?  Well, if you liked that, you’re in luck, because I’m totally going to be doing that again today.  What sort of crazy person would put these things back to back?  This sort of a crazy person, that’s who!  Yesterday’s review looked at one of Harrelson’s earliest on-screen roles.  Today, we’re jumping forward to 2018, with his turn as Han’s mentor Tobias Beckett in Solo.

Tobias Beckett was released in Series 4 of the Solo line from Hasbro.  As a pretty major player in the film, it’s a bit surprising it took so long to get him, but at least he actually showed up at (some) retail.  Beckett is based on his main smuggler’s appearance from the film, same as his 6-inch figure.  The figure stands 4 inches tall and has 9 points of articulation.  A number of the Solo figures added wrist joints, and Beckett furthers this by also adding swivels at the tops of the boots.  Despite these extra joints, I still found Beckett to be almost impossible to keep standing. I’m not sure why he’s so different from others in the line, but it does appear that the feet are angled a little too far back.  It’s possible this issue is limited to my figure, but it’s still frustrating nonetheless.  The figure’s sculpt is decent enough, though I don’t find it to be quite as strong as the rest of the main characters. The detailing is generally a little softer, and I don’t think there’s really much of Woody Harrelson in the likeness on the head.  It’s certainly not as good as the spot-on likeness of his larger counterpart.  Also not quite as strong as the larger figure?  The paint.  Obviously, there’s less of a canvas to work with on the smaller figure, so less detail is expected, and for the body, that’s not so bad.  It’s really the head that gets the worst of it, because they’ve transformed Harrelson’s scruff into more of a Van Dyke looking thing.  It just makes the whole figure look rather off.  Beckett is packed with his dual blaster pistols, which he can hold or store in his working holsters.

Beckett’s a figure a very nearly missed at retail.  None of the stores in my area have carried anything past the second wave of Solo product, and even that was scarce.  I ended up finding this one at the Walmart near where my family was vacationing over the winter holiday, just as they put all of their Star Wars stuff on clearance, at which point pretty much every figure they had disappeared overnight.  If you really just want a Beckett, the Black Series figure is the better offering, and may just be easier to find in the long-run.  Had I not found this guy when I did, I don’t know he would have warranted tracking down after the fact. 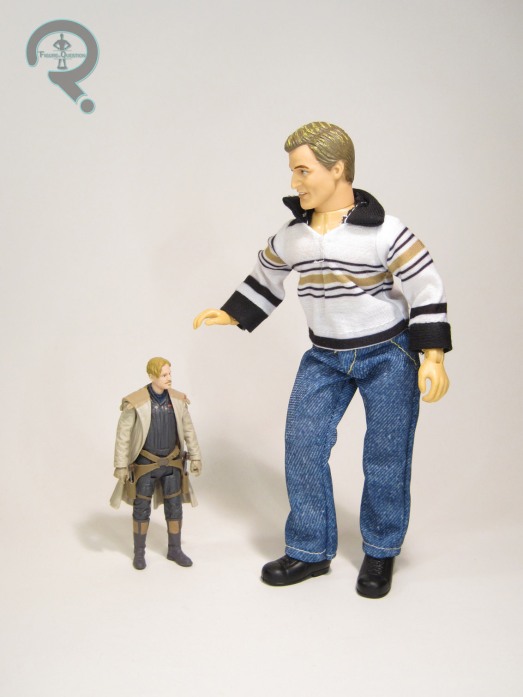 “Beckett is a survivor, always quietly working out angles to come out ahead. He’s assembled a team of specialized scoundrels to carry out risky but profitable heists.”

In a lot of ways, Solo doesn’t get the recognition it deserves.  Fortunately for fans of the movie, The Black Series is one place it does get its proper due…or at least is going to in the very near future.  We’ve already gotten the young versions of Han, Chewbacca, and Lando, as well as Qi’ra and the Range Trooper.  Following those up, is Han’s mentor, Mal Reynolds knowledge and generally Woody Harrelson-esque dude, Tobias Beckett! 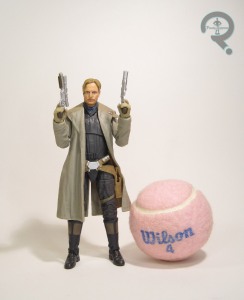 Tobias Beckett is figure 68 in Hasbro’s The Black Series line-up.  He shipped in the early fall assortment of the line, alongside Bespin Han and the Rebel Fleet Trooper.  Beckett is seen here in his standard heist gear, which he wears from the train heist onward.  While I was definitely a fan of his Imperial disguise look, this is his main appearance, and is definitely the best choice for this figure.  The figure stands 6 inches tall and has 27 points of articulation.  Beckett’s sculpt is unique to this figure.  It’s a pretty decent offering, though I think when compared to the really strong offerings we’ve gotten so far from the Solo stuff, he’s maybe a little more rudimentary.  It’s mostly how the articulation is worked into it; the mid-torso joint in particular is a little jarring, as are the hips.  In addition, the double holsters are rather restricting to the hip movement, making the awkward joints seem even more unnecessary.  On the plus side, his long coat hides a lot of this, and is one of my favorite parts of the sculpt.  His likeness is a decent match for Harrelson.  The hair, which is a separate piece, is a little bulky, but it’s still a respectable handling of his somewhat scraggly hair from the movie, especially at this scale.  The paintwork on Becket is pretty decent, but again, seems like a very slight step down from the other Solo figures.  He’s got a printed face, but it seems a little blurrier than other figures.  It’s still pretty solid, though, and his general color scheme matches up well with his on-screen appearance.  Beckett is packed with his pair of revolver-style blasters, which can either be held or stowed in his holsters.  They’re some of the best detailed weapons from this line, continuing the upward trend of the weapons in this line.

Beckett was a little bit illusive, mostly due to a general lingering of the preceding assortment at retail.  But, I was fortunate enough to find him at a somewhat less-travelled Walmart, so ah-ha!  I liked Beckett a lot, so I’m glad to finally have him in figure form.  He’s the weakest of the Solo figures so far, but seeing as the Solo figures have been consistently my favorite Black Series figures of late, that doesn’t really hinder him. I look forward to getting the rest of his crew!