Today, I’ll be finishing up my reviews of the most recent set of releases from Spy Monkey Creations’ Weaponeers of Monkaa line.  I mentioned in my first review that there were 4(ish) figures released.  Well, the ish is coming into play in today’s review.  I’ll be looking at both Brutok Novum Veridiohm and the Crayboth Eaglet, mostly because I don’t feel the Eaglet really warrants its own review.  Let’s take a look at these guys! 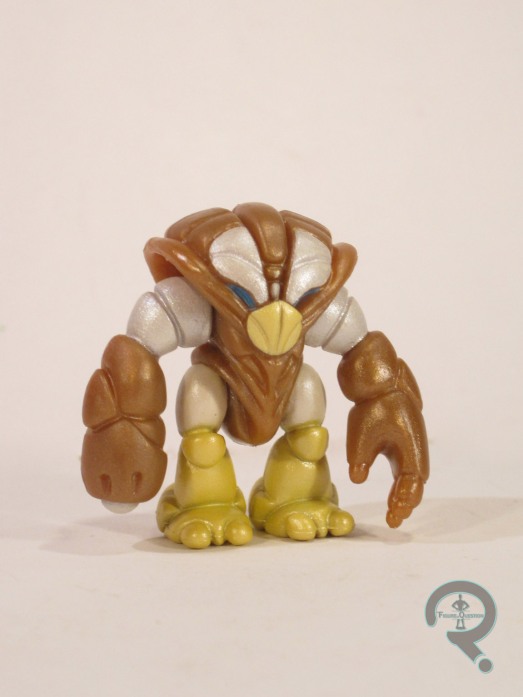 First up, I’ll take a look at the Eaglet, as it’ll be a quick little review.  The Eaglet is a crossover between Spy Monkey and Onell Design, another company that’s made a pretty big splash in the online, small production toy scene.  It’s nice to see these two companies working together, as it’s a refreshing change from the huge rivalries of the bigger toy companies.  The Eaglet stands about 2 inches tall, and has 4 points of articulation.  He’s made from 5 separate pieces, which are all compatible with the Weaponeers, although the Eaglet isn’t quite as modular.  He’s a bit stylistically different from the Weaponeers, but he fits alright.  For the most part, the figure is molded in the appropriate colors, but he’s got paint apps on each piece, which makes him a bit more detailed than some of the other figures.

Next, the main focus of this review is Brutok.  This is the second release of the former right hand man of the villainous Uberous, depicting him after his encounter with the Veridiohm in the recent “Golden Age” chapter of the Weaponeers story.  Brutok is reconstructed from the same energy that makes up the Veridiohm, resulting in him being all translucent green too.  Which is totally cool with me.  Brutok is built from the same selection of pieces as the rest of the figures in the line, and is molded in the same translucent green plastic as the Veridiohm figure.  In his default set up, Brutok stands 4 inches tall and has 17 points of articulation.  The sculpt is made up from the same pieces as previous figures, but Brutok actually throws a few more pieces into the mix.  He’s got four vac-metalized half-spheres which can plug into the ports on his arms and legs, and a larger half-sphere that can be plugged into his torso, in place of one of his insignia squares.  These pieces add a unique flair to the figure, and I really enjoy them.  As a DX release, Brutok has a more complicated paint job.  While it’s not as extensive as the one on Gearion, I think it’s a bit more intricate, with several “digital” looking textures painted at various points, not to mention the silver skin and yellow eyes present on each head.  Brutok is packaged with the standard short blade and sickle, molded in the same lovely green plastic as the rest of Brutok.

Like the rest of the set, I picked up these two as soon as they went up for sale.  The Eaglet is different, which adds a bit of diversity to the lineup.  Apparently, he was a big hit, as he was the first item to sell out.  Brutok wasn’t far behind him, and I can honestly say that’s not a surprise to me at all.  I thought it’d be tough for any of these releases to overthrow Lifespring Empyreus as my favorite figure in the line, but Brutok here seems to have done just that.  The coloring of the plastic coupled with the unique paint detailing on this figure make him really standout from the pack! 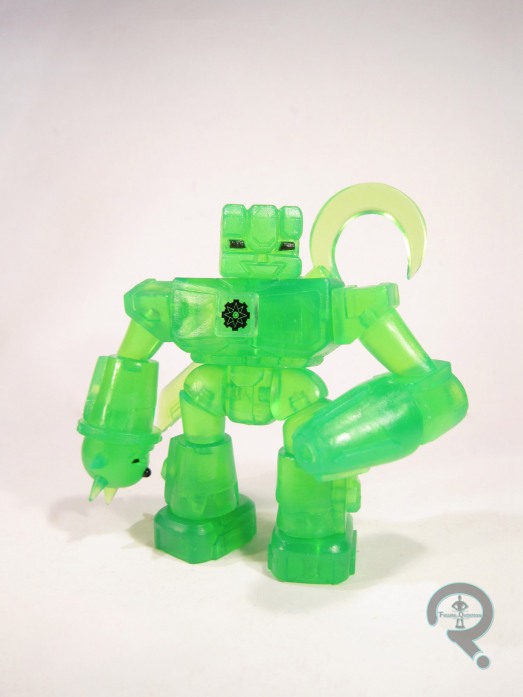 Today marks the third entry in my reviews of the most recently released set of figures in the Weaponeers of Monkaa line.  So far, I’ve looked at Midas: the Golden Gohlem and Gearion: Lord of Light and leader of the Golden Gohlem army.  I’ll be jumping over to another segment of the line with the Veridiohm.   Let’s take a look at the figure!

The Veridiohm uses the basic layout of the Gohlem figures from the line, but according to Spy Monkey, this isn’t actually a Gohlem, it just looks like one.  Supposedly, the Veridiohm is like a hive-mind type entity made of green energy.  Pretty much it’s an excuse to release a Weaponeer in translucent green plastic.  And I most certainly won’t complain about that!  The Veridiohm is built on “Old Faithful”, the same set of parts used for every figure in the line.  In the default setup, the Veridiohm has 16 points of articulation and stands just shy of 4 inches tall.  Verodiohm is one of the basic releases, so he’s got a much more basic set of paint apps.  There pretty much exactly the same as those seen on Midas, but in green plastic instead of gold.  The insignias are nice and crisply painted, and the eyes don’t have any real slop or bleed over.  The Veridiohm includes the standard short blade and sickle, molded in the same green plastic as the rest of the figure.

The Veridiohm was purchased on the first day of release, as soon as they went up for sale on the Spy Monkey website.  As simple as he is, I really enjoy the figure, due mostly to the color of the plastic.  I’m a total sucker for translucent green! 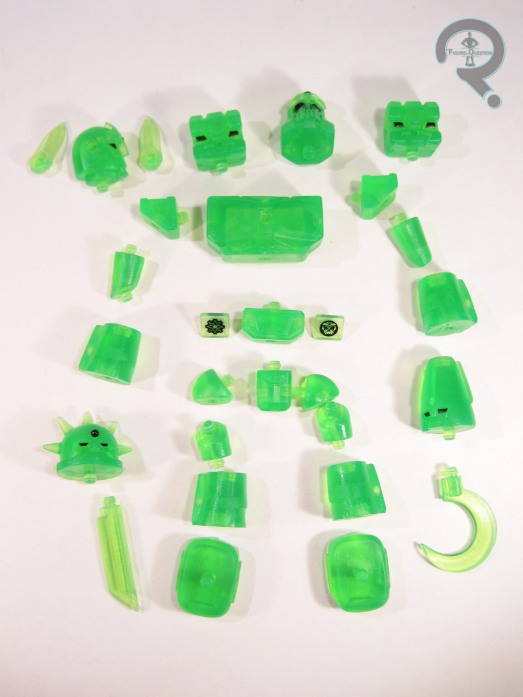