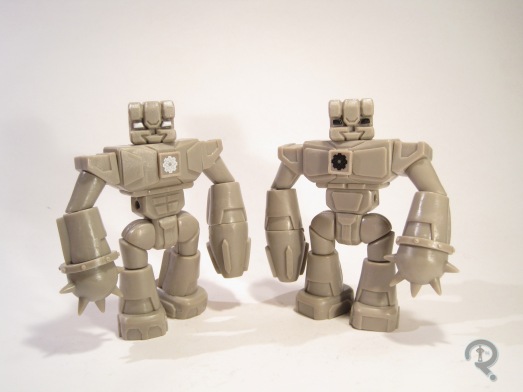 If you’re a fan of action figures that are fun (and if you aren’t, what’s wrong with you?) then Weaponeers of Monkaa is a line that is definitely worth checking out. I can’t stress enough how refreshing it is to collect a line that isn’t retail and license driven. It’s a toyline created for the love of the game, and that’s something to admire in this day and age. The line’s creators, Spy Monkey Creations, just released a new assortment of figures, and like the good completist that I am, I purchased the whole set. So, let’s look at the Granite Gohlems Rhokk and Rholl! Aren’t those names clever?

Rhokk and Rholl were both released as part of the sixth assortment of Weaponeers of Monkaa figures. They’re separate figures, and usually I’d give them a separate review. However, they’re both Granite Gohlems, and they’re pretty much the same figure, with some very minor paint differences. The figures are both about 4 inches tall and feature 19 points of articulation in their default states. As I noted in my Palidar review, the nature of the line means that you can effectively build them anyway you like, so your mileage may vary on height and movement. Both figures use the same assortment of parts we’ve seen on every other WoM figure so far. If it ain’t broke, don’t fix it. As Gohlems, they both use the “fist” head for their standard set up. I really like this head, because it gives off a really cool retro robot vibe. The rest of the pieces are just as good here as they have been every other release

of the parts, so that’s pretty great. Paint work on these two is relatively minor, but it’s also the only thing that distinguishes them from each other. Both figures are molded in the same grey plastic as Palidar. On Rhokk, the eyes and logos are done in black, while on Rholl they are done in white. Personally, I think that Rholl’s scheme makes him look a little more lively, but both are well executed, with no real slop or anything. The two figures are both armed with a short blade and a sickle, cast in the same grey plastic as the figures.

I got these two on the first day of release on the Spy Monkey online store, at the same time as Palidar. There’s no denying that Palidar was the star of this assortment, but these two are certainly solid additions to the line. Plus, they offer another variety of Gohlem, which is certainly nice.

Weaponeers of Monkaa is one of those great lines of toys that are desirable simply because they’re just really fun toys.  They aren’t a pre-existing property, just cool action figures.  Because of this, they are one of my favorite toylines, especially in this era of difficult to acquire, high priced figures from the bigger companies.

Today, I’ll be looking at the Magma Gohlem.  The Gohlems are the line’s “army builders,” and are meant to represent Weaponeers who haven’t chosen a side yet.

The Magma Gohlem was part of the first release of Weaponeers figures.  The figure doesn’t have a proper name, so he’s just meant to be one of the generic Gohlems.  Being the “Magma” Gohlem, his distinguishing feature is being molded in translucent orange plastic.  My previous reviews from this line have pointed out that every figure in the line is essentially made from the same set of pieces.  The Magma Gohlem sticks with this idea.  In his default set up, the Magma Gohlem has 16 points of articulation, and has a height of just under 4 inches tall.  However, thanks to the modular nature of the line, you can reconfigure him to stand taller and feature additional articulation, if you so choose.  I’ve reviewed this sculpt a few times before, so I don’t really have anything to add.  It’s still a stand-up sculpt, and everything looks and fits together great.  The paint on the Magma Gohlem is relatively minor, really only being used for his eyes and logos, but what’s there is cleanly applied, which is good.  The Magma Gohlem includes all of the extra heads available in the line, a lower torso piece that can be added for some more height, a short blade and a sickle, all molded in the Magma Gohlem’s orange plastic.

The Magma Gohlem was amongst my second set of figures purchased from Spy Monkey’s web site.  I had picked up the first release Vilhain, and the Crystal Gohlem when they were initially released, and liked them enough to pick up the rest of the first assortment.  The Magma Gohlem isn’t my favorite figure in the line, but he’s a solid addition to the line, and is just as fun as any other release in the line.

Today marks the third entry in my reviews of the most recently released set of figures in the Weaponeers of Monkaa line.  So far, I’ve looked at Midas: the Golden Gohlem and Gearion: Lord of Light and leader of the Golden Gohlem army.  I’ll be jumping over to another segment of the line with the Veridiohm.   Let’s take a look at the figure!

The Veridiohm uses the basic layout of the Gohlem figures from the line, but according to Spy Monkey, this isn’t actually a Gohlem, it just looks like one.  Supposedly, the Veridiohm is like a hive-mind type entity made of green energy.  Pretty much it’s an excuse to release a Weaponeer in translucent green plastic.  And I most certainly won’t complain about that!  The Veridiohm is built on “Old Faithful”, the same set of parts used for every figure in the line.  In the default setup, the Veridiohm has 16 points of articulation and stands just shy of 4 inches tall.  Verodiohm is one of the basic releases, so he’s got a much more basic set of paint apps.  There pretty much exactly the same as those seen on Midas, but in green plastic instead of gold.  The insignias are nice and crisply painted, and the eyes don’t have any real slop or bleed over.  The Veridiohm includes the standard short blade and sickle, molded in the same green plastic as the rest of the figure.

The Veridiohm was purchased on the first day of release, as soon as they went up for sale on the Spy Monkey website.  As simple as he is, I really enjoy the figure, due mostly to the color of the plastic.  I’m a total sucker for translucent green!

So, I took a one day break, and now I’m back to one of my favorite toylines of late, Weaponeers of Monkaa.  They just released their 4th set of figures about two weeks ago, and mine arrived earlier this week.  So, I’ll be taking a look at the  4(ish) figures that were just released.

Midas is one of the Gohlem, who are essentially the army builders of the line.  He’s the second case of one of the Gohlem getting an actual name, but the Gohlem are supposed to all look the same, so if you had a bunch of this figure, you could certainly build quite the Golden Gohlem army.  Most of the Gohlem don’t have a specific affiliation, which allows you to choose which side to put them on, but Midas and the rest of the Gohlems are actually affiliated with Gearion, who was also released as part of this set.  I’ll be looking at him tomorrow.  Like I mentioned in my review of Lifespring Empyreus, every figure in the line is built from roughly the same parts, just in different color sets.  Midas is (unsurprisingly) molded in gold plastic.  In his default setup, Midas has 16 points of articulation and stands a little under 4 inches tall.  However, my version of Midas stands a little taller, and has 3 additional points of articulation, as I added the ear-thingies from the Empyreus head and the lower torso piece, which is typically not included in the default Gohlem setup.  Not much new to say about the sculpt.  It’s exactly the same as Empyreus’s, and it looks just as nice here.  Midas is quite a bit lighter on the paint, with detailing only on his two insignia plates and the eyes on the various heads.  This is to be expected, as Midas is one of the basic releases, which have less paint apps.  What’s there is nice and clean, with no noticeable issues.  In addition to the assorted extra heads and the like, Midas includes the standard short blade and sickle, molded in gold.

I procured Midas along with the rest of this set as soon as they went up for sale.  I’ve been anxiously awaiting each subsequent release in this line.  Midas is a good example of what the basic figures in the line can offer.  And like I said in my review of Empyreus, I can’t recommend this line enough! 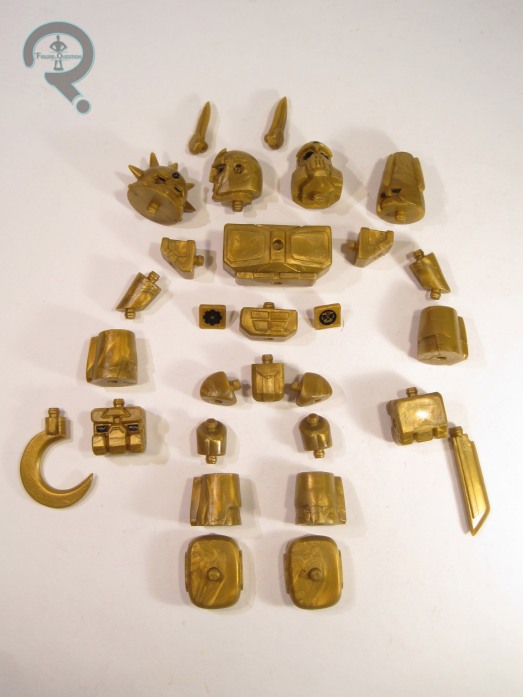