Hey guys!  The following is a Guest Review from my awesome brother Christian Wilson!  Take it away Christian…

Initiating Surprise in Three…..Two……One…. SUPRISE!!! EVERYONE GATHER ROUND! IT’S ME! THE SMALLER VERSION OF THE HEAD HONCHO(Ethan), CHRISTIAN! I, like Tim, LOVE video games. But, my upbringing on action figures, was not one of Video Game based action figures, it was a very similar upbringing to Ethan, as we are brothers. I don’t have as many action figures as Ethan nor am I as good at video games as Tim, I still have years of experience in both to combine them to create a lovely concoction. Still, I do love them video games equally as much as action figures. Moving On! As Portal 2(The game this figure is from) is one of my favorite video games of all time, it’s no surprise I would get the action figures. The first one I got is the one you see above, a girl named Chell. 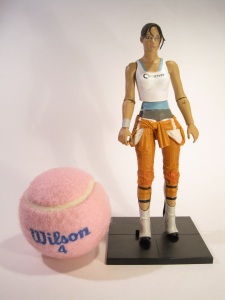 Chell is the main protagonist in both Portal and Portal 2. She is the only human test subject left in all of the ruins of Aperture Science. She successfully escapes the Laboratory in Portal, but is brought back into the Lab by another Aperture Science robot. She then again tries to escape in Portal 2, but eventually is let go by the main robotic operator of the facility, GLADoS. Moving onto the figure, Chell stands at 7 inches tall, with 23 points of articulation (EVEN ONE IN HER PONYTAIL!). The paint job is quite fantastic (Although, there are reports of HORRIBLE face paints, but mine looks OK) and shows Chell from Portal 2, not Portal (There was a major redesign in the appearance of Chell between games). Also, her parts seem to be all newly sculpted and they really look well-sculpted. She comes with a Dual Handheld Portal Device, or Portal Gun for short. This Portal Gun has a blue LED Light and fits nicely in her hands. Also she comes with a stand, BECAUSE SHE CAN”T STAND FOR S**T! Since Chell comes equipped with “Long Fall Boots”(These were created by Aperture Science to stop Test Subjects suffering from fall damage and breaking valuable equipment) the design of them cuts off her standing ability almost entirely. So hold onto the stand, because she’ll need it.

Since the game is first person, Chell was not immediately recognizable. But I knew after the marvel that was Portal 2, I would need to get one of those figures. But, my BIG BRO got me Chell for my birthday and I was very pleased. She is a great figure and is up on my shelf to stay!