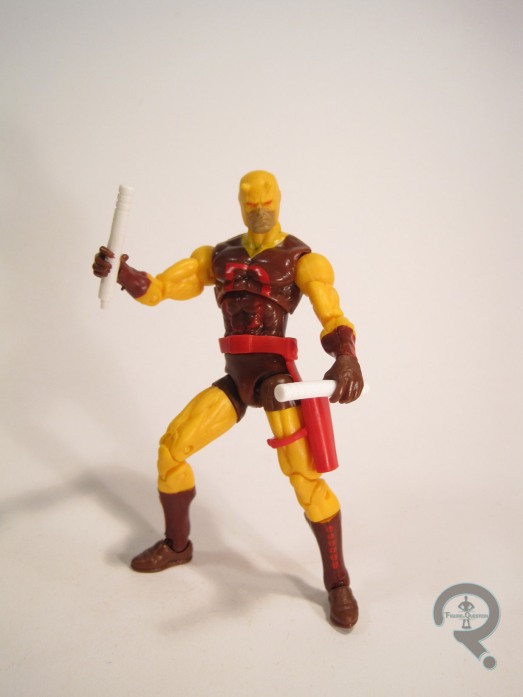 Given how long he wore it, Daredevil’s yellow costume is rather disproportionally popular.  I guess it’s just different enough that it stands out.  It’s also a pretty easy variant for toy companies to release, what with using the same selection of parts as the normal Daredevil costume and all, so there’s lots of incentive to make figures of the design.  So far, its shown up in just about every major scale of Marvel figure, including 3 3/4-inch, which I’ll be looking at today. 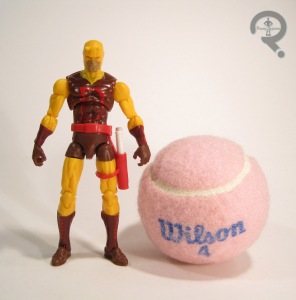 Daredevil was released in the second series of the smaller-scale Marvel Legends line.  He’s the second smaller-scale Yellow Daredevil figure we’ve gotten, but the last one was built on one the less than stellar bodies that Hasbro used to kick off Marvel Universe, so an update was much needed.  The figure stands about 4 inches tall and he has 28 points of articulation.  Structurally, he’s the same as the Daredevil vs Bullseye two-pack version of Daredevil from the  Marvel Universe line.  Since that figure’s tooling was already paid for, it means this guy gets to keep all of the articulation, giving him about 10 points more than his compatriots from this same series.  Like with the Marvel Legends Daredevil I looked at a few months back, the sculpt here seems a little too well-built for an early in his career Matt Murdock, but it’s not like it’s a bad sculpt or anything.  In fact, he was probably one of the better sculpted Marvel Universe figures.  Paint is the key part here, and it works alright.  The color scheme is pretty much the same as we saw on the larger figure this year.  The brown isn’t my favorite thing ever (I prefer black with red highlights), but it looks decent enough, and everything looks pretty sharp.  The logo on the chest is still a little on the large side, but it’s not quite as bad as on the larger figure.  Daredevil is packed with his billy clubs, which are the same as those included with all the prior small-scale Daredevils.  They work pretty well, and seem a bit less rubbery this time.

Daredevil was picked up for me at the same time as Rage, mostly to keep my Yellow Daredevil collection going.  There’s not really much new here, but I liked the basic version of this figure, and by extension I like this one.  There’s certainly nothing wrong with a simple repaint when it’s appropriate, especially when it means I get another Yellow Daredevil!