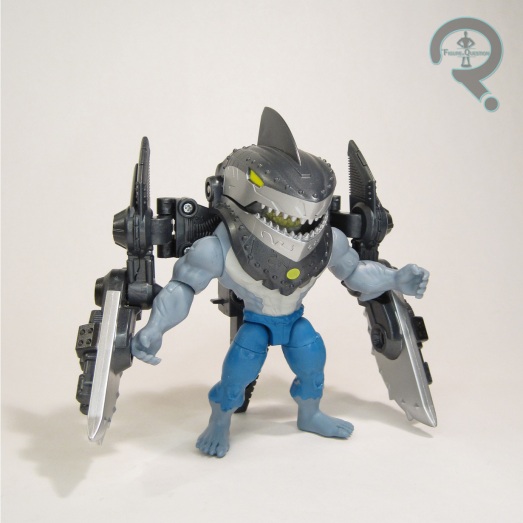 Okay, so I’ve been informed recently that I need to be higher energy.  So, I, uhh, guess I should try to be higher energy?  I mean, yeah, let’s be high energy!  I love high energy!  High energy is great!  I’m excited to be a part of this plan to be higher energy!  Something that is admittedly pretty high energy is the DC Universe subscription-exclusive Harley Quinn animated series, which launched last fall.  It starts out focussed pretty heavily on Harley and Joker, but in pretty quick fashion Harley picks up her own crew of pretty far-reaching DCU characters.  One of my favorite inclusions is the show’s version of King Shark, who subverts a lot of the usual King Shark concepts and is just generally a good time.  And right as I was getting into the show, Spin Master opted to include a King Shark in their opening line-up of DC figures, so I of course bought one.  Let’s review this boy!

King Shark is part of the first deluxe assortment of Spin Master’s Batman: The Caped Crusader line.  King Shark’s not classically a Batman villain, but I guess with the heavy featuring on a Bat-related show, there was some wiggle room, and I’m not going to argue with something that gets me an easily attainable King Shark figure.  The figure stands roughly 4 1/2 inches tall and he has 14 points of articulation.  He’s a little bit restricted on the articulation.  The lack of neck joint is understandable, but no knees or ankles is a little annoying, especially when it comes to keeping him standing.  It’s not the end of the world, but compared to the others I’ve looked at from the line, it’s just a slight letdown.  King Shark’s got a unique sculpt, though almost all of it was immediately re-used for the Target-exclusive hammerhead version.  This one goes instead for Shark’s pre-New 52 Great White-style head, which has always been my preferred.  It’s a rather stylized take on the character, and definitely errs more on the cartoony side of things, but I really dig the detailing on his gills and the small scarring on the torso.  Those are the sorts of details that could have been overlooked, so their inclusion here really shows Spin Master is going the extra mile.  The paintwork on King Shark is more basic than the sculpt, but it gets all of the important details down, and again fits the style of the rest of the line.  Spin Master’s deluxe figures have so far followed a common theme, that theme being big armored wing pack things.  King Shark gets one of those, because why not, I guess?  It’s pretty neat, if perhaps rather gimmicky.  But then, Spin Master seems to know where their target audience is.

Super Awesome Wife’s background in marine biology has her talking about sharks a fair bit of the time, mostly touching on the unfairness of their usual portrayals in media.  So, when King Shark’s Harley Quinn appearances subverted this, she was quite thrilled.  Honestly, that did even more to endear me to a character I was already pretty into.  After getting Superman and Nightwing, I had made a passing mention to Max that I *might* be interested in King Shark, and he was kind enough to keep an eye out for one, setting me up with this guy shortly thereafter.  He’s goofy and gimmicky, but I continue to enjoy this line of figures wholeheartedly!