“Born from the nightmares of the Dark Multiverse, The Batman Who Laughs is a hybrid version of the Batman and The Joker from Earth -22. This twisted version of Batman was created when nanotoxins from The Joker’s heart were released into Bruce Wayne’s bloodstream, causing the Dark Knight’s perfect mind to merge with the warped psyche of the Clown Prince of Crime. He soon became part of an attempt to plunge the entire Multiverse into ultraviolence, chaos, and utter darkness. After being initially defeated, The Batman Who Laughs managed to survive and remains a threat to the greatest heroes of the Multiverse.”

For Day 3 of the post-Christmas, we’re going back to more of my usual territory, specifically the realm of super hero comics.  Even more specifically, DC Comics.  They’re pretty busy doing nothing but Batman these days, and, well, umm, here’s some more of that, I suppose.  The last few years, DC’s bread and butter (and, by extension, their main licensee McFarlane’s bread and butter) has been Dark Knights Metal, a multiversal story where everyone is Batman.  Except for Batman.  Sometimes Batman is Joker.  And here we are with that.

The Batman Who Laughs with Sky Tyrant Wings is the second version of the Batman Who Laughs to be released in McFarlane’s DC Multiverse line, as part of the Merciless Collect-To-Build assortment, which was released at the tail end of 2020, at least in some quantities, and made it out more fully last year.  The figure stands 7 inches tall and he has 40 points of articulation, thanks to the extra joints present in the wings.  In terms of articulation scheme, he generally follows the usual McFarlane set-up, for better or for worse.  The notable change-up is to the hips, which don’t have the same full range of mobility that we usually see, being far more restricted to just forward and back.  Given the long jacket, it’s not a huge surprise or hinderance, but it’s still noteworthy.  This Batman Who Laughs is based on the character’s later appearance after he steals the wings from the Sky Tyrant, the Dark Knights Metal version of Hawkman.  To give McFarlane some credit, as far as I can tell, there are no shared parts between the two versions of BWL they released.  There are certainly similarities, but this sculpt just generally improves upon the shared elements between the two, making for a generally more well put-together offering, at least to my 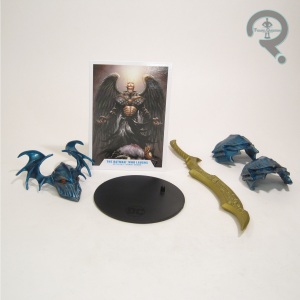 eyes.  The crazier, more exaggerated facial expression works a lot better for the character, especially in toy-form, and the texture work on the outfit is pretty solid.  McFarlane certainly does torn-up and gritty well.  I also feel that the more posed hands work a lot better for the character than the more generic gripping hands of the prior release.  The most obvious change here, of course, are the wings.  They actually work quite nicely, as they’re well-articulated, well-detailed, and not terribly balanced considering.  It would be nice to see such work on a proper Hawkman, but this is McFarlane, so a Batman variant is really the best we can hope for, I suppose.  The paint work on this figure is generally pretty good.  It’s largely rather basic work, but I think that’s for the best, especially after the weirdness surrounding the accent work on the last figure’s mouth.  It just looked odd, so going a little more straight forward here is probably the right call.  The Batman Who Laughs includes a display stand and a collector’s card for the figure proper, as well as the head, shoulder pads, and sword of the Merciless Build-A-Figure.

Dark Knights Metal really isn’t my sort of thing.  It’s honestly a lot of the stuff I don’t like about DC’s current obsession with Batman and the need to constantly place him above all of the other heroes rolled into one big event.  The Batman Who Laughs himself is a concept that I don’t think is terrible, but like the whole cross-over, I kind of feel like he got played out a lot quicker than he went away, and he just sort of keeps resurfacing.  So, I wasn’t seeking this figure out on my own.  That said, I received this one from Jess’s parents for Christmas, and I can certainly appreciate the thought, the gesture, and ultimately the figure proper.  The story that spawned him may not be my main thing, but the figure did turn out pretty nicely, so I can’t really knock it. 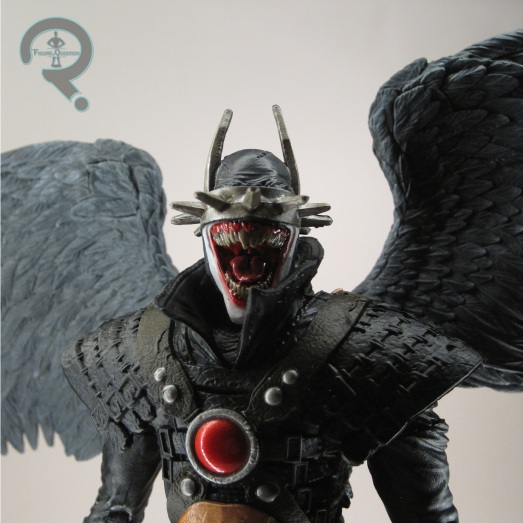